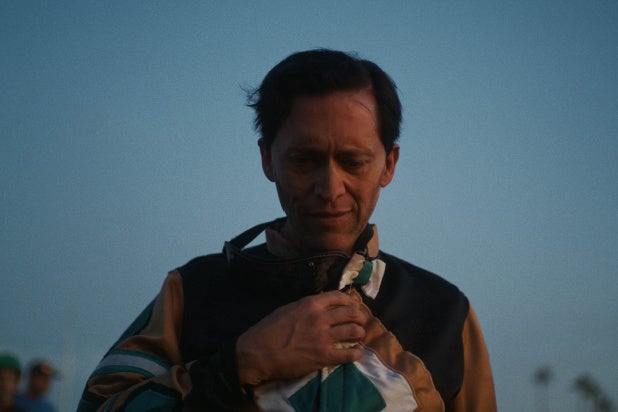 For the better part of the last 30 years, actor Clifton Collins Jr. has vigorously treated the entertainment industry mostly to supporting parts, but in “Jockey,” a drama about a man losing the ability to do what he loves most, he finally gets a lead role to match his aptitude for existential contemplation. You’ve certainly seen him before, but never quite like this.

Channeling his personal impressions as the son of a jockey, writer-director Clint Bentley makes his debut with a resplendent and touching character piece. Among movies dealing with men involved in physically demanding activities who are forced to change course, “Jockey” falls somewhere in between Chloé Zhao’s “The Rider” and Darren Aronofsky’s “The Wrestler,” with notes of the more recent “Sound of Metal.”

Bentley and his co-writer and producer Greg Kwedar first worked with Collins Jr. on the latter’s first feature as a director, “Transpecos,” a smart border thriller, but this artistic collaboration fully takes flight here. As Jackson, an aging jockey in Arizona trying to squeeze one final glory lap before the bodily aches he drags round turn completely unbearable, the performer sets forth a stern charisma laced with pride. Molly Parker as Ruth, Jackson’s tough but fair trainer (and boss), acts as his sympathetic accomplice.

Injuries and chronic pain are a bonding factor among all other riders in this corner of the American southwest. Informing the film with authenticity, the filmmakers insert Collins into this reality via a series of group sessions with other ailing jockeys, all of them non-actors just sharing their actual near-death experiences. All along, while trying to get back in shape or dealing with a faster horse, Jackson works through the soreness of his mangled body. Every training session is labored, but Collins makes such muted strain credible.

Unlike other stories situated in similar environments, the animals here are part of the milieu but not the emotional core. That aspect resides in the father-son bond Jackson forms with Gabriel, a young jockey played by versatile young actor Moises Arias (“Monos”). His relatable, and sometimes humorous, naturalness helps him blend in with the world of the film.

The hardworking boy believes Jackson to be his father and tells him so, but even if the seasoned racer can’t see how that’s possible, a relationship blossoms. Even if Jackson’s not a parent, he can at least be a teacher, passing on his knowledge to nurture the potential of someone dedicated to the same bone-breaking path. Appropriately, given the rugged context of the sport and its practitioners, Bentley bypasses sentimentality: The most moving exchanges often end with a bittersweet smile.

Jackson and Gabriel’s dynamic is sumptuously mirrored in the way that Brazilian cinematographer Adolpho Veloso captures nearly the entire production at sunrise or dusk. Each frame is infused with a dreamlike glow or shot in silhouettes that come only at the beginning or the end of the day. Spellbinding to a fault, the imagery speaks to where the characters are in their journey both as jockeys and as people.

Whether or not Jackson is willing to accept it, this is the twilight of his career, while Gabriel is at the dawn of his, and the underlying correlation Bentley and Veloso create between theme and visuals is pure artistry. And as day gives way to night, so must Jackson to his destiny. Veloso notably goes further than simply emulating Emmanuel Lubezki’s approach in a Terrence Malick film, experimenting with unexpected camera movements that toy with the shots in fittingly disorienting ways.

On a larger, state-of-the-industry point, two Latino actors playing roles that let them exist as part of the American landscape, without interrogating or parading their cultural identity for show, is terrific proof that it can be done. Who they are isn’t denied (we hear Collins throw out a few Spanish words on occasion), but their background doesn’t dominate their existence. Yes, “Jockey” is a showcase for Clifton Collins, Jr., but it’s a trusting director, equipped to provide the space for the actor to explore a depth absent in previous opportunities, that enabled it. Buoyed by a spiritual quality of the setting, Collins can, with a slight smirk or silent facial gesture, encompass the range from disappointment to resignation and relief.

With “Jockey,” Bentley gambles on distinctiveness rather than chasing reinvention, eschewing dramatic tricks in favor of honesty. It’s unimportant that film bears surface resemblance to previous ones, because once fleshed out, its beats and characters defy predictability. This is more than just a career best for Collins — it’s a career-redefining performance. His talent for profundity was always there but previously untapped to this extent. Now the hope is that this won’t be a zenith for him, but instead a revitalizing rebirth.

“Jockey” has been acquired by Sony Pictures Classics.