SEOUL, South Korea — Kim Ki-duk, ​an internationally celebrated South Korean film director who made movies ​about people ​on ​the margins of society​ that ​often ​included ​shocking scenes of violence against women, and whose career was dogged by allegations of sexual misconduct, died on Dec. 11 in Latvia.​ He was 59.

The cause was Covid-19 and related heart complications, his production company, Kim Ki-duk Film​, said. According to the company, he had undergone two weeks of treatment for the disease at a hospital in Latvia, where he had recently relocated and was reported to have been scouting locations for his next film.

Mr. Kim remains the only South Korean director to have won ​top ​awards at the three ​major international film festivals: those in Cannes, Venice and Berlin. He ​spent much of his time abroad after allegations that he had sexually abused actresses began to haunt his career in 2017​.

Few film industry groups issued formal statements on ​Mr. Kim’s death or his films. ​Film critics who shared their condolences and appreciations on social media faced blistering reactions from people who said that doing so was tantamount to violence against his victims.

“I stopped teaching Kim Ki-duk’s films in my classes in 2018 when the program about his sexual assaults screened on Korean TV,” Darcy Paquet​, an American film critic​ who specializes in Korean cinema​, wrote on Twitter.​ “If someone does such awful violence to people in real life, it’s just wrong to celebrate him. I don’t care if he’s a genius (and I don’t think he was).”​

But Mr. Kim’s films also attracted fans who said his depictions of poverty and violence ​helped spark important debates about life in South Korea. “I try to discover a good scent by digging into a garbage heap,” he once said of his approach to filmmaking.

His movies often centered on society’s underbelly. One dealt with a coldhearted man who turned a woman he once loved into a prostitute. He also tackled issues like suicide, rape, incest, plastic surgery and mixed-race children.

“Crocodile” (1996), his first film, tells the story of a homeless man who lives on the Han River in Seoul and makes a living by stealing cash from victims who kill themselves or by recovering bodies in the river and demanding rewards from grieving families. The man saves a woman from suicide and then rapes her. 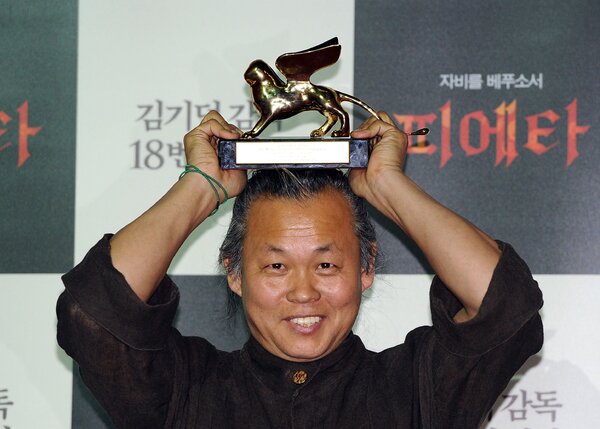 “Pieta” (2012) is perhaps Mr. Kim’s most recognized film. A deeply unnerving tale, it follows a mother and son on a quest for revenge and redemption and includes graphic scenes of torture and violence. It won the Golden Lion at the 2012 Venice Film Festival. The year before, Mr. Kim had received an award at the Cannes festival for “Arirang,” a documentary about a near-fatal accident that occurred on one of his shoots.

While his movies often garnered critical acclaim abroad, most of them were commercial failures in South Korea.

“I made this movie so that we can reflect upon ourselves living in this miserable world where you are lauded for succeeding in life even if you do so through lawbreaking and corruption,” he said after his movie “One on One,” about the brutal murder of a high school girl, flopped in 2014. “I made it hoping that some will understand it. If no one does, I can’t do anything about it.”

Many moviegoers, especially women, were disturbed by what they considered perverted, misogynistic and sadistic scenes of violence against women in Mr. Kim’s movies. The criticism grew significantly in 2017 when an actress starring in Mr. Kim’s movie “Moebius” accused him of forcing her into shooting a sexual scene against her will.

He was later fined for slapping her in the face, but other charges were dismissed for lack of evidence or because the statute of limitations had expired.

He ultimately became known as one of the many prominent ​South Korean ​men​​ — including theater directors, prosecutors, mayors, poets and Christian pastors — to face serious accusations of sexual misconduct as part of the country’s #MeToo movement. In 2018, the local broadcaster MBC aired “Master’s Naked Face,” which examined the allegations against Mr. Kim.

Mr. Kim denied being a sexual predator and sued his accusers for defamation. The cases were still pending in court when he died.

Mr. Kim was born on Dec. 20, 1960, in ​Bongwha, a rural county in the southeast of South Korea. His early formal education ended in primary school. His father was reported to have been a disabled Korean War veteran who abused him.

As a teenager, Mr. Kim toiled in factories and sweatshops. He enlisted in the South Korean Marine Corps and later enrolled in a Christian theological school, before moving to Paris to study painting when he was 30.

When he returned to South Korea in 1995, he was determined to become a film director and began churning out one low-budget movie after another, winning international recognition that few South Korean directors were able to achieve.

Mr. Kim is survived by his wife and a daughter.