“The Office” is giving NBCUniversal’s streaming service, Peacock, a boost after the show left Netflix.

But Netflix wasn’t dealt a major blow by the show’s departure.

The hit sitcom, which was consistently one of Netflix’s most popular shows until leaving for Peacock this year, generated more signups to Peacock than when the service launched nationwide in July, according to the analytics company Antenna (it had soft launched for Comcast customers in April).

The show also drove 3.9 times the signups compared to the average December weekend, according to Antenna.

Antenna pulls from a variety of opt-in panels like budgeting apps to track purchase and transaction data. The data excludes signups to Peacock’s free tier.

The chart below breaks down the data: 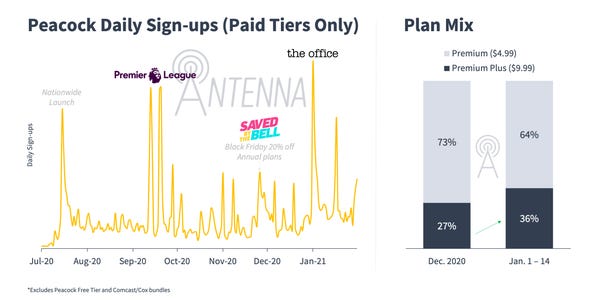 While this data doesn’t include Peacock’s free tier, previous Antenna data from December shed light on the make up of Peacock’s signups.

It showed that Peacock and Apple TV Plus made up just 2% combined of streaming market share in the US. Peacock had 26 million signups at the time and the data suggested the majority of those were free-tier signups since Antenna only accounted for the subscription tiers. Peacock had 33 million signups as of late January, Comcast said during its most recent earnings call.