“People wish to be settled,” Ralph Waldo Emerson wrote. “Only as far as they are unsettled is there any hope for them.” This tension between stability and uprooting, between the illusory consolations of home and the risky lure of the open road, lies at the heart of “Nomadland,” Chloé Zhao’s expansive and intimate third feature.

Based on Jessica Bruder’s lively, thoroughly reported book of the same name, “Nomadland” stars Frances McDormand as Fern, a fictional former resident of a formerly real place. The movie begins with the end of Empire, Nev., a company town that officially went out of existence in late 2010, after the local gypsum mine and the Sheetrock factory shut down. Fern, a widow, takes to the highway in a white van that she christens with the name Vanguard and customizes with a sleeping alcove, a cooking area and a storage space for the few keepsakes from her previous life. Fern and Vanguard join a rolling, dispersed tribe — a subculture and a literal movement of itinerant Americans and their vehicles, an unsettled nation within the boundaries of the U.S.A.

Bruder’s book, unfolding in the wake of the Great Recession, emphasizes the economic upheaval and social dislocation that drive people like Fern — middle-aged and older; middle-class, more or less — out onto the road. Reeling from unemployment, broken marriages, lost pensions and collapsing home values, they work long hours in Amazon warehouses during the winter holidays and poorly paid stints at national parks in the summer months. They are footloose but also desperate, squeezed by rising inequality and a frayed safety net.

Zhao smooths away some of this social criticism, focusing on the practical particulars of vagabond life and the personal qualities — resilience, solidarity, thrift — of its adherents. Except for McDormand and a few others, nearly all of the people in “Nomadland” are playing versions of themselves, having made the slightly magical transition from nonfiction page to nondocumentary screen. They include Bob Wells, the magnificently bearded mentor to legions of van dwellers, who summons them to an annual conclave — part cultural festival, part self-help seminar — in Quartzsite, Ariz.; Swankie, an intrepid kayaker, problem solver and nature lover; and Linda May, a central figure in Bruder’s book who nearly steals the movie as Fern’s best friend.

Friendship and solitude are the poles between which Zhao’s film oscillates. It has a loose, episodic structure, and a mood of understated toughness that matches the ethos it explores. Zhao, who edited “Nomadland” in addition to writing and directing, sometimes lingers over majestic Western landscapes and sometimes cuts quickly from one detail to the next. As in “The Rider,” her 2018 film about a rodeo cowboy in South Dakota, she’s attentive to the interplay between human emotion and geography, to the way space, light and wind reveal character.

She captures the busyness and the tedium of Fern’s days — long hours behind the wheel or at a job; disruptions caused by weather, interpersonal conflict or vehicle trouble — without rushing or dragging. “Nomadland” is patient, compassionate and open, motivated by an impulse to wander and observe rather than to judge or explain.

Fern, we eventually discover, has a sister (Melissa Smith), who helps her out of a jam and praises her as “the bravest and most honest” member of their family. We believe those words because they also apply to McDormand, whose grit, empathy and discipline have never been so powerfully evident. I don’t mean to suggest that this is an awards-soliciting display of acting technique, a movie star’s bravura impersonation of an ordinary person. Quite the opposite. A lot of what McDormand does is listen, giving moral and emotional support to the nonprofessional actors as they tell their stories. Her skill and sensitivity help persuade you that what you are seeing isn’t just realistic, but true.

Which brings me, somewhat reluctantly, to David Strathairn, who plays a fellow wanderer named Dave. He’s a soft-spoken, silver-haired fellow who catches Fern’s eye and gently tries to win her affection. His attempts to be helpful are clumsy and not always well judged — he offers her a bag of licorice sticks when what she wants is a pack of cigarettes — and although Fern likes him pretty well, her feelings are decidedly mixed.

Mine too. Straitharn is a wonderful actor and an intriguing, nontoxic masculine presence, but the fact that you know that as soon as you see him is a bit of a problem. Our first glimpse of Dave, coming into focus behind a box of can openers at an impromptu swap meet, is close to a spoiler. The vast horizon of Fern’s story suddenly threatens to contract into a plot. He promises — or threatens — that a familiar narrative will overtake both Fern and the movie. 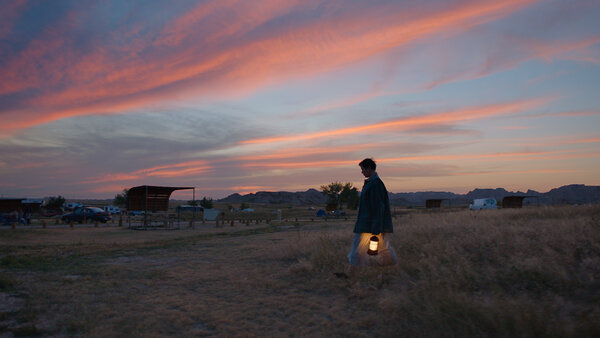 To some degree, “Nomadland” wishes to be settled — wants not necessarily to domesticate its heroine, but at least to bend her journey into a more-or-less predictable arc. At the same time, and in a fine Emersonian spirit, the movie rebels against its own conventional impulses, gravitating toward an idea of experience that is more complicated, more open-ended, more contradictory than what most American movies are willing to permit.

Zhao’s vision of the West includes breathtaking rock formations, ancient forests and wide desert vistas — and also iced-over parking lots, litter-strewn campsites and cavernous, soulless workplaces. Against the backdrop of the Badlands or an Amazon fulfillment center, an individual can shrink down to almost nothing. The nomad existence is at once an acknowledgment of human impermanence and a protest against it.

Fern and her friends are united as much by the experience of loss as by the spirit of adventure. So many of the stories they share are tinged with grief. It’s hard to describe the mixture of sadness, wonder and gratitude that you feel in their company — in Fern’s company, and through her eyes and ears. It’s like discovering a new country, one you may want to visit more than once.

Nomadland
Rated R. Living rough, and talking that way too. Running time: 1 hour 48 minutes. In theaters and on Hulu. Please consult the guidelines outlined by the Centers for Disease Control and Prevention before watching movies inside theaters.