LONDON — “Nomadland,” Chloé Zhao’s film about a woman forced to join the rising numbers of Americans living out of vans as they search for work, was the big winner at the EE British Academy Film Awards in London on Sunday.

It was named best film at Britain’s equivalent of the Oscars, better known as the BAFTAs, beating the likes of Aaron Sorkin’s “The Trial of the Chicago 7” and the much-hyped “Promising Young Woman,” starring Carey Mulligan.

Zhao was also named best director, while Frances McDormand, the star of “Nomadland,” won best actress. The film, which has been heavily praised by British critics for its “delicate, incisive portrait of a life lived on the road,” also took the award for best cinematography. 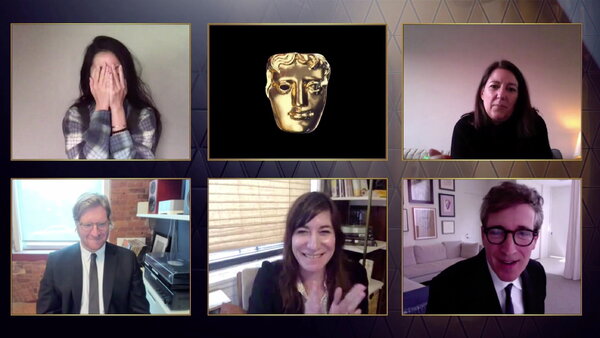 Zhao referred to her time studying in an English seaside town when accepting the best director award. “Wow, I think I just made my teacher at Brighton College really proud,” she said, to laughter from the virtual audience.

But she dedicated her awards haul to the nomadic Americans, middle-aged and older, who participated in the film. “Thank you for showing us that aging is a beautiful part of life,” Zhao said. “How we treat our elders says a lot about who we are as a society,” she added, “and we need to do better.”

This year’s BAFTAs were handed out at the Royal Albert Hall in London, although without the usual glamorous audience. Instead, nominees attended via video link, some sitting in their living rooms.

This year’s nominees had been notable for their diversity, in stark contrast to last year’s awards when no people of color were nominated in the main acting categories, and no women were nominated for best director, prompting a social media outcry.

In response, BAFTA made a host of rule changes, including requiring its members to undergo unconscious bias training before voting and involving juries in several categories.

The diverse nominations did not always translate to wins for actors of color. Anthony Hopkins won best actor for “The Father,” where he plays a man struggling with dementia, beating the likes of Riz Ahmed for his portrayal of a musician losing his hearing in “Sound of Metal,” and Chadwick Boseman for his starring role in “Ma Rainey’s Black Bottom.”

But Daniel Kaluuya was named best supporting actor for his role as Fred Hampton, the chairman of the Illinois Black Panther Party, in “Judas and the Black Messiah,” repeating his success at the Golden Globes. Yuh-Jung Youn, the veteran Korean actress, won best supporting actress for her role in “Minari.”

British people “are known as very snobbish” Youn said in her acceptance speech, saying the award meant more because of that.

The success of “Nomadland” is likely to increase hype around the film ahead of this year’s Oscars, scheduled for April 25, where it is nominated for six awards.

The BAFTAs are normally seen as a bellwether for the Academy Awards because there is some overlap between the 7,000-strong membership of the British Academy of Film and Television Arts, which organizes the BAFTAs, and the members of the Academy of Motion Picture Arts and Sciences.

Although four of the movies contending for the best picture Oscar — “Judas and the Black Messiah,” “Mank,” “Minari” and “Sound of Metal” — were not nominated in the BAFTAs best film category.