‘Now and Then’ at 25: Girlhood Finally Taken Seriously

When “Now and Then” was released in 1995, it had the makings of a hit: an A-list cast, a coming-of-age narrative about an unbreakable sisterhood, a nostalgic filter and an underlying mystery. At the time, it was sidelined, panned by critics and largely forgotten. That hasn’t stopped it from gaining a cult following in the 25 years since, becoming a touchstone for girls yearning to be seen.

Even in the ’90s, a movie that focused on the power of female friendships wasn’t exactly reinventing the wheel — “Thelma and Louise,” “The First Wives Club” and “Romy and Michele’s High School Reunion” were just a few of the films exploring this theme. But only “Now and Then” examined such friendships while also giving the complexities of girlhood a weight that coming-of-age films typically neglected.

Written by I. Marlene King and directed by Lesli Linka Glatter, “Now and Then” followed four preteens in Indiana grappling with friendship, puberty and grief during a life-changing summer in 1970. Samantha (Gaby Hoffmann) is a loner fascinated by the supernatural. Teeny (Thora Birch) yearns for stardom. Roberta (Christina Ricci) is a rebellious tomboy. And Crissy (Ashleigh Aston Moore) is a naïve prude who abhors cursing. They bond over cemetery séances, games of Red Rover and the mystery of what happened to a boy named Dear Johnny.

In the “now” of 1991 (when the movie actually begins), the four — remembering their childhood vow to always be there for one another — reunite in their hometown, where Chrissy is preparing to give birth. It’s been a decade since they’ve been together, and they’re in drastically different places: Samantha (now played by Demi Moore) is a depressed sci-fi author and Teeny (Melanie Griffith) is a movie star, while Roberta (Rosie O’Donnell), a gynecologist, and Chrissy (Rita Wilson), a housewife, never left. 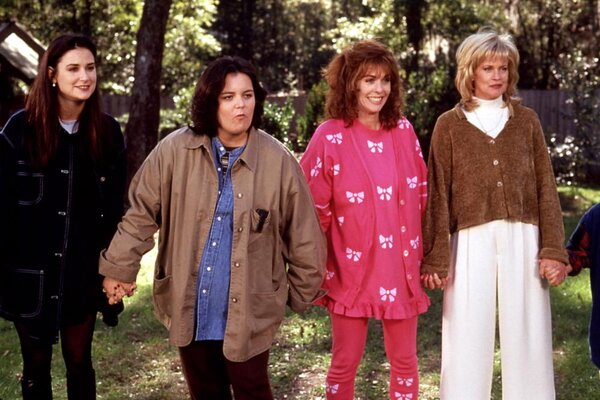 Released in October 1995, “Now and Then” was a box office success, earning $37.5 million worldwide on a budget of $12 million. But it was largely dismissed by critics. Roger Ebert labeled it a “gimmicky sitcom,” and The New York Times called it “a little dull and much too predictable.” Reviewers generally considered the star-studded cast of adults to be an unnecessary addition.

“Now and Then” was also flooded with comparisons to — and ultimately overshadowed by — “Stand By Me,” the 1986 coming-of-age drama about four boys. Both films were summertime retrospectives about close-knit friends during a transitional period in their lives who were faced with the realities of impending adulthood. But the earlier film was nominated for two Golden Globes and an Oscar, while “Now and Then” was snubbed and viewed as derivative. With the exceptions of “The Baby-Sitters Club” (also 1995), which glossed over heavier subject matters, and “My Girl” (1991), which wasn’t centered on female friendship, few narratives at the time focused on girlhood. It was as if girls were supposed to see themselves through boys’ eyes, not their own.

But thanks to a variety of factors — including its stars, each with their own followings, and repeated airings on cable TV — the film became a sleepover staple and won over new audiences through the years. When fans rediscovered it was on Netflix (it’s since left but can be seen on Amazon Prime and iTunes), a Twitter frenzy broke out.

In the way that “Sex and the City” devotees identified as a Samantha or a Charlotte, viewers saw their personalities echoed in the foursome — for instance, the girly Teeny or tomboy Roberta. For these viewers, the flashback sequences make it a quintessential summer film, an era-defining time capsule when Nancy Sinatra boots, culottes and breezy bike rides were common, and the Archies’ “Sugar Sugar” and Tony Orlando’s “Knock Three Times” were hits.

More important, “Now and Then” showed tween girls as fully realized characters who weren’t written off or secondary. Tackling death and grief, along with budding sexuality gave their stories weight when narratives about female adolescence were often surface-level.

Take the search for Dear Johnny. It proves to be a powerful force: a distraction for Sam, whose parents are splitting up; a connection for Teeny, who feels abandoned by her absent country-club parents; an adventure for a sheltered Chrissy; and a way for Roberta to confront her mother’s death. It’s this dark journey to uncover the town’s hidden mystery about what happened to Dear Johnny that helps the friends save one another and discover themselves.

What also made “Now and Then” a singular force is the awkward preteen moments that often remain unspoken between friends and are rarely shown onscreen. These inseparable girls can tell each other about the pudding-filled balloons they wear as they eagerly await developing breasts because “Jell-O is too jiggly” or that you can’t actually get pregnant from a French kiss. In some ways, the movie can be seen as a blueprint for the tender, cringeworthy moments between best friends more than two decades later in “Lady Bird” (bingeing on Communion crackers while comparing notes on masturbating) or the Netflix series “Never Have I Ever” (making awkward TikTok videos).

Though in the “now” of “Now and Then,” the friends’ reconciliation initially reveals cracks in their relationships. After the birth of Chrissy’s baby, they find common ground reminiscing about the summer of 1970 in their old treehouse. It’s an all-too-familiar feeling of reuniting with childhood friends and instantly realizing you’re clinging to what connected you in the past and struggling to relate in the present.

But the once-close friends yearn to be reunited with their former preteen selves as well, and opening up to one another is a dose of nostalgia they need. In doing so, for instance, Samantha can finally face that she’s spent years alone because she pushes people away. And it extends to reality: Sometimes being with the people you knew during your formative years can help you admit uncomfortable truths that you’ve avoided. Because even after any time apart, they still know you best.

Years later, the film laid the groundwork for “Pretty Little Liars,” an ABC Family series that followed four inseparable friends and included murder mysteries and clandestine meetings in cemeteries. King, the showrunner of that series, reunited with Glatter, who directed the pilot and finales for the first two seasons. Together they “really wanted it to be ‘Now and Then’ meets ‘Twin Peaks’ for teenage girls,” King told Vulture.

The success of “Pretty Little Liars” also renewed interest in “Now and Then.” During the third season of the show, King was set to work on a TV version of the movie for ABC Family, though it never got off the ground. “They wanted to change it so the ‘now’ was present day and the ‘then’ would be the ’90s,” King told Entertainment Weekly. Moving the timeline from the 1970s “ruins how special the movie is,” she said.

In 2020, the influence of “Now and Then” can be detected in pop culture in other ways. Without it, it’s possible that “Booksmart,” “Eighth Grade” and “Lady Bird” might not have seen critical success. Further, coming-of-age movies for girls now even seem like a popular trope. At its core, “Now and Then” was about the intensity of female friendship and the discomfort of growing up — realities that we all know but were finally acknowledged onscreen.