Pamela Tiffin, the bouffant-haired brunette model turned actress who leapt to movie stardom at 19 in a Tennessee Williams drama and a Billy Wilder comedy, then ran away to make Italian movies and retired from acting before her 32d birthday, died on Wednesday at a hospital in Manhattan. She was 78.

The death was announced in a family statement to The Hollywood Reporter.

Ms. Tiffin began her Hollywood movie career in two very different films. In “Summer and Smoke” (1961), based on the Williams play about a spinster (Geraldine Page) and her love for a local doctor (Laurence Harvey), she played the innocent and much younger woman who steals him away.

That same year she starred as a the perky daughter of a Coca-Cola executive in Mr. Wilder’s political comedy “One, Two, Three.” Her character travels to Berlin and marries a sexy young Communist (Horst Buchholz) — very much against the wishes of her corporate watchdog (James Cagney).

But not long after making a 1965 film with Marcello Mastroianni, she largely abandoned Hollywood to star in Italian films. And in 1974, when she was barely in her 30s, she retired from acting altogether. That was not what movie-industry experts had predicted.

Interviewed by The Daily News of New York in December 1961, Mr. Wilder called her “the greatest film discovery since Audrey Hepburn.” In the same article, Ms. Tiffin told the journalist Joe Hyams why she was beginning to prefer acting to her old career.

“A model sells herself, but an actress sells the characters she plays,” she said. “I was pretty bored with myself and my face and body.”

Pamela Tiffin Wonso was born on Oct. 13, 1942, in Oklahoma City, the daughter of Stanley Wonso, an architect, and Grace Irene (Tiffin) Wonso. She grew up in Oak Lawn, Ill., a Chicago suburb, and began modeling — mostly in print advertisements and runway shows — when she was 13.

Three years later, she and her mother moved to New York City, where Pamela attended Hunter College between modeling assignments. There are two versions of her discovery by Hollywood, and both appear to be true.

On a vacation trip to Los Angeles, she was spotted having lunch with a friend in the Paramount Studios commissary and was soon meeting with the producer Hal Wallis. Mr. Wallis was almost finished casting his newest project, “Summer and Smoke.”

But Mr. Wilder, with “One, Two, Three” coming up on his calendar, was already searching for her. He’d seen a lingerie ad in The New York Times Magazine; the photographer was Bert Stern, and the model, wearing only a slip, turned out to be Ms. Tiffin. In a 1962 photo essay in Esquire magazine, Mr. Stern recalled the shoot and called her “the movies’ hottest new female star.” 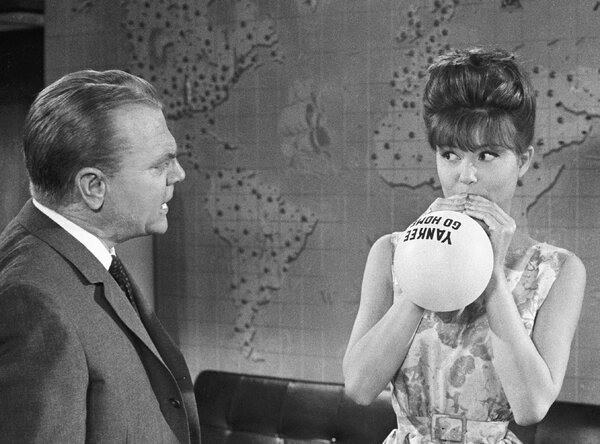 After her two star-making film roles, Ms. Tiffin’s third film was “State Fair” (1962), a remake of the 1945 Rodgers and Hammerstein movie musical (her singing voice was dubbed), as a farmer’s enthusiastic teenage daughter looking for romance between the pie-baking contests and the livestock shows.

Ms. Tiffin made two dozen films in the 1960s and the first half of the ’70s. She remained visible and marketable — playing a novice flight attendant in the romantic comedy “Come Fly With Me” (1963) and a rich man’s flirtatious daughter in “Harper” (1966), a mystery starring Paul Newman.

At the same time, she was becoming known for movies aimed at teenage audiences, including “For Those Who Think Young” and “The Lively Set,” both released in 1964. James Darren was her co-star in both.

Her sole appearance on Broadway was in a revival of the Kaufman and Ferber comedy “Dinner at Eight” (1966). She played Kitty Packard, the flashy and most obviously out-of-place dinner guest, played by Jean Harlow in the 1933 film.

The year before, she had been cast as Marcello Mastroianni’s wife in “Oggi, Domani, Dopodomani” (1965), a comedy about a man trying to sell his wife to a harem. After great reluctance and considerable argument, she agreed to become blond for the role.

She found that she liked the new look, and she kept it as she began making films in Italy. She appeared in at least a dozen, including “The Archangel” (1969), a crime comedy with Vittorio Gassman, and “The Fifth Cord” (1971), a crime thriller with Franco Nero. After a decade and a half in retirement she made her final screen appearance in “Quattro Storie di Donne” (1989), an Italian mini-series.

Her last American film had been “Viva Max” (1969), a comedy about a 20th-century Mexican general who wants to recapture the Alamo. Parts of it were filmed in Rome, for her convenience.

In 1962, Ms. Tiffin married Clay Felker, then an editor at Esquire magazine. A year later he became the founding editor of New York, The Herald Tribune’s Sunday supplement, which later became New York magazine. He edited the magazine until 1977, while the marriage, not as long-lived, ended in divorce in 1969, after a long separation.

“We still love each other,” Ms. Tiffin told Earl Wilson, the syndicated columnist. “We still have dinner. But life, it seems, is not a Doris Day movie.”

In her memoir, “Daring: My Passages” (2014), the author Gail Sheehy, who became Mr. Felker’s next wife, reprinted a particularly civilized post-separation note from Ms. Tiffin.

“I hear that you have stopped seeing Gail Sheehy,” she wrote. “Don’t be foolish. She is a woman of fine character and great talent. Be good to her.”

In 1974, Ms. Tiffin married Edmondo Danon, an Italian philosopher and professor who is the son of the film producer and screenwriter Marcello Danon. He survives her, as do two daughters, Echo Danon and Aurora Danon.

Ms. Tiffin insisted that she had never been interested in an acting career. It took an East Coast filmmaker multiple tries to persuade her to play a miller’s daughter in a 1960 short about Colonial Williamsburg — her real screen debut. She did study acting, with Stella Adler, but only after her film career had begun.

There was one aversion she never got over, though. Acting for the small screen was not for her, according to Tom Lisanti’s book “Pamela Tiffin: Hollywood to Rome, 1961-1974” (2015). After filming an episode of “The Fugitive” in 1963, she said: “I’m slow in life. I take time to read. I love long lunches” — which led her to conclude, “I think I’m too slow for television.”