Parasite is an inspired tall tale about society’s lower depths

From the start of Bong Joon-ho’s Parasite, we know who the parasites are – or at least we think we do. The opening scene introduces us to a family of ne’er-do-wells, the Kims, scuttling like cockroaches around their cluttered basement apartment: they hold their mobile phones aloft, hoping to find the spot where they can steal the Wi-Fi from a nearby cafe.

As an image of poverty, this is completely up to date – and yet the absurd spatial logic of the gag harks back to the slapstick of the silent era, where the clowns were typically underdogs who found ingenious ways to do more with less. 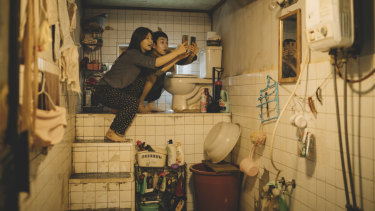 Bong is comparably resourceful on his own behalf, combining many storytelling traditions into a style all of his own. A worthy winner of the Palme D’or at this year’s Cannes film festival, the inspired Parasite can’t precisely be labelled a comedy, a thriller, nor a socially conscious drama about the class divide in South Korea, although it contains elements of all three.

At a pinch, you might call it a satiric fable, or a tall tale: it also resembles a laboratory experiment, following a given set of postulates through to the bitter end.

The film is a companion piece to Bong’s 2006 smash hit The Host (host and parasite, get it?), which saw a similarly down-and-out family battling a monster from the deep. This time, however, the family is the monster – a four-headed beast that operates as a single entity and shows little mercy to outsiders.

Looking greyer than previously but no more dignified, The Host’s star Song Kang-ho returns here as Ki-taek, the nominal head of the Kim household, whose life has been one failed business venture after another.

The plan that turns the family’s fortunes around is hatched by Ki-taek’s college-age son Ki-woo (Choi Woo-shik) at the expense of a much wealthier family, the Parks. Starting out as tutor to their teenage daughter (Jung Ji-so), Ki-woo soon finds pretexts to move his father, mother (Jang Hye-jin) and sister (Park So-dam) into the Park household, without letting on that the four of them are related. 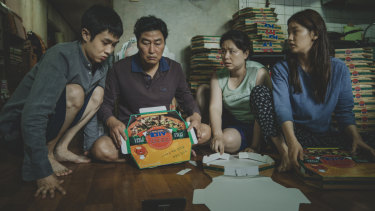 The Kims hatch an ingenious plan.

However ruthless the family's machinations, you have to admire the sheer resourcefulness of the scam. Ki-woo resembles a director, getting his co-conspirators to rehearse their parts (and discouraging his father from a natural tendency to overplay). His sister’s more visual talents come in handy for forging documents, as well as letting her pose as an imperious “art therapist” to the Parks’ precocious young son (Jung Hyun-joon).

“It’s very metaphorical,” Ki-woo likes to say when he wants to sound intelligent. Of course, the joke is double-edged: everything here is metaphorical, or as much as you want it to be. Bong treats the idea of upper and lower classes as literally as possible – the Parks live at the top of a hill, the Kims at the bottom of one – precisely so more figurative meanings can be read. 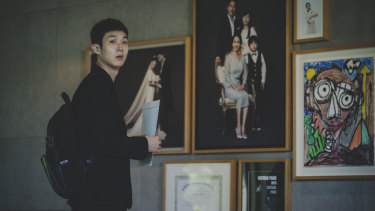 Choi Woo-shik’s character encounters another world when he lands a job with the Parks.Credit:Madman

The two families are opposites and mirrors of each other, a form of patterning that is echoed variously through two different flights of steps, for instance, or two windows for the characters to gaze out of each residence.

Just as typical of Bong is a surrealistic sense that the plot has been patched together from an unlikely collection of bits and pieces. A large rock introduced at the outset plays a significant role, though not in the way we necessarily expect; so too do peach fuzz, the Boy Scouts, and the smell of wet fabric. 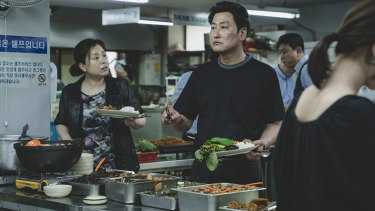 As always, Bong’s formal choices are close to impeccable: he’s the master of making an image feel sinister by holding it a beat too long, or using lateral tracking shots to suggest how his characters are propelled by drives rather than by psychology in any usual sense.

That he never shirks his responsibilities as an entertainer is part of what makes his work so disquieting: we are drawn into the story without being guaranteed a happy ending, or even a moderately consoling one. But while he may be a cynic, he’s no misanthrope, nor is he lacking in warmth. At least, there’s no doubt that he likes the Kims – which is precisely why he has so few qualms about showing them at their worst.