Renée Zellweger Will Be Back in a Moment

BEVERLY HILLS, Calif. — “We will start this interview at some point,” I insisted to Renée Zellweger.

It was mid-August, and I had gone to the Beverly Wilshire Hotel to ask Zellweger about “Judy,” the new drama that casts her as Judy Garland in the last year of her life, when the singer-actress was at her most down and out. It’s a transformative role played with so much gusto that the 50-year-old Zellweger will be hard to beat for this year’s best-actress Oscar, a major coup considering her recent six-year break from the screen.

But it took us a while to get to all that. First, there was the matter of coaxing Zellweger to the interview in the first place: As a publicist kept emailing me to push her arrival back, our lunch date crept closer to happy hour. I wondered whether Zellweger, who’s sometimes had a rough go of it in the media, might be stalling for time.

For nearly two hours in the hotel lobby, I watched a series of well-dressed women and underdressed men emerge from the elevator, and then Zellweger appeared, small and inconspicuous in workout clothes, her blond hair tucked beneath a weathered Texas Longhorns ball cap. “Thank you for sticking around,” she said shyly. “Everything kept spilling over.”

Zellweger told me she was getting reacclimated to the schedule of stardom, including a photo shoot, endless dress fittings, film-festival appearances, and our interview. If “Judy” goes the distance this award season, she’ll have to do a lot of talking about herself — and that’s fine, she supposes, but isn’t it more fun to have a conversation about something else?

I think that’s why she seized on a bit of small talk offered as we walked to the restaurant: My boyfriend had moved away that morning, and we were about to embark on a long-distance relationship. Suddenly, Zellweger was the one grilling me: What did he do for a living, how long had we been dating, and wasn’t it Rilke who once said that love is being the guardian of one another’s solitude? 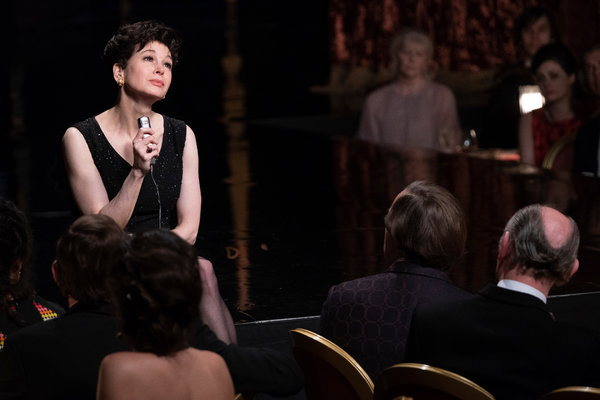 “It’s going to be fine, I know it!” she said, her squeaky, Texas-accented voice now so determined that it brought to mind old-fashioned words like “pluck” and “moxie.” Forget all the fears I might be harboring, she told me: “People are cynical and they’ll say this kind of thing doesn’t work and I totally disagree. Look at Kyra Sedgwick and Kevin Bacon, for cryin’ out loud!”

She said the distance would teach us never to take each other for granted, and recommended meditation and frequent FaceTime sessions. It was all so compelling that after 20 minutes of earnestly proffered advice, I had to remind Zellweger that she was the one meant to be answering questions today.

Her face fell just a bit. “First of all, are you starving?” she asked, coolly opening the menu. “You must be, honey.” The waiter came over and Zellweger placed an order for me: “He’ll have a triple martini,” she said, cackling.

ONCE ZELLWEGER RESIGNED herself to the interview, she started to enjoy it. “Judy” happened much the same way: The director Rupert Goold coaxed Zellweger carefully toward the project, aware that an early offer might prove too daunting. “Someone was asking, when was that moment you knew you were in?” Zellweger told me. “And I don’t think it ever arrived!”

She was sent the script in 2017. “At first, I didn’t understand why they thought of me for it,” Zellweger said. The movie would require a great deal of live singing, because it follows a near-destitute Garland after she accepts a five-week engagement to warble at a London nightspot, and despite earning an Oscar nomination for the musical “Chicago,” Zellweger didn’t consider herself much of a vocalist. 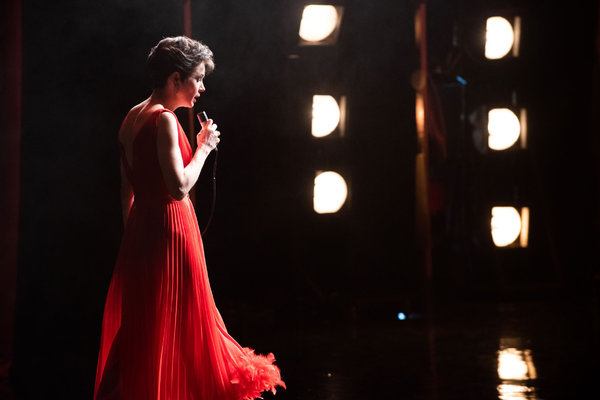 But Goold felt that the vulnerability Zellweger showed in “Jerry Maguire” and the chutzpah that won her an Academy Award for “Cold Mountain” made her exactly right for the role.

“Garland had such incredible emotional immediacy,” Goold told me by phone. “You feel like you’re getting a spirit that has this innate innocence and hopefulness in it, and I wanted someone who had that kind of fragility.” He also said that Zellweger’s own Hollywood experience, which has drawn scrutiny about her romances and tabloid speculation about cosmetic surgery, could help inform a lead character who must constantly fight damaging rumors.

So Zellweger began to explore. Since Goold insisted on no lip-syncing, she booked studio time and hired a singing coach to see if Garland’s distinctive vocal stylings were within reach. She worked with a choreographer and costumer to channel Garland’s hunched, puttering posture. And she went down a rabbit hole reading biographies, watching old clips, and scanning Garland fan forums for any useful detail.

But whenever Zellweger caught herself telling me about these things for too long, she became self-conscious. “How is that a job? What fun!” she said, over and over.

The most dramatic sequences in “Judy” come whenever Garland is forced to sing despite a voice ravaged by time and addiction. Goold leaned into that suspense: “I told Renée, ‘I’m going to structure the script so that it’s not only building up to “Can Judy Garland deliver what she needs to in this moment?” but also, “Can Renée Zellweger?”’”

She performed those numbers live in front of an audience, and Zellweger recalls the scenes now with the excitement of someone who went skydiving and didn’t die. “I was elated. I was so high. Talk about things you’ve never done before!” she said. “I didn’t allow myself to think about it too much — it was in the back of my mind, terrifying, and I kept pushing it back, back, back. Luckily, it was such a whirlwind that I didn’t have time to pause and think, ‘I’d rather not do that thing tomorrow.’”

Still, Zellweger has become wary of projects that ask her to take on too much without the time to properly metabolize it all. Garland was exploited by a Hollywood machine that rarely allowed her time to rest, and Zellweger said she understood what it’s like to reach “a certain place where you just don’t know if your skin is thick enough, and then having to go anyway.”

In 2010, after working nearly nonstop for her entire film career, Zellweger withdrew from Hollywood for a hiatus that lasted six years, until she re-emerged in the sequel “Bridget Jones’s Baby.” “I was lying to myself, and I don’t know why,” she said. “I didn’t see the exhaustion side of it. There was a moment where I stopped recognizing that I had to take care of myself.”

She doesn’t regret having taken on several major projects per year, but all that time off helped get her priorities in order.

“Instead of saying, ‘Boy, I sure hope I can make that special person’s birthday party,’ I needed to say, ‘I’m going to the birthday party,’ and I didn’t feel like I had the right to make that decision because of the blessing of this work,” Zellweger said.

Freed from that duty, Zellweger entered therapy, traveled, took classes at the University of California, Los Angeles, and even wrote a pilot for Lifetime (the channel ultimately passed): “I took time off so I wasn’t regurgitating the same old emotional experiences to tell stories. I lived some new ones, and all of it is informative.”

And without that perspective, she couldn’t have played Judy Garland. “It made me appreciate my little bit of experience with having to navigate your way around a public persona that’s a ball hog in your life,” she said.

WEEKS LATER, I went to an after-party for “Judy” at the Toronto International Film Festival. The movie had premiered that night to rapturous tweets and a standing ovation, and when Zellweger took the stage at the theater, she cried. Everybody at the after-party just down the street was eager to offer their congratulations, but an hour later, the crowded soiree still lacked its star.

“Where is Renée?” I heard a publicist ask. “Does anyone have eyes on her?”

Finally, it was confirmed: Renée was about to enter the building. I caught Zellweger walking very deliberately up the stairs in a powder-blue dress and sky-high white heels. Flanked by two representatives, she was lost in focus, as though willing herself to enter the first of many parties this season where she would be the center of attention.

Then she looked up and squealed. “I’m so excited to see you again!” she said, rushing up the stairs to pepper me with questions. Would I see my boyfriend soon? Oh, next week? How wonderful! “This is a very special time for him,” she told a publicist.

The publicist tried to usher her into the party as I asked her about the standing ovation. Zellweger steadfastly resisted both of us.

“I heard the premiere went amazing,” I said.

“Not as amazing as you seeing your boyfriend next week!” she replied, jabbing a finger into my chest.

It went on like that until it couldn’t anymore. After all the work she had put into this role, she had just gotten a three-minute standing ovation. What did that feel like?

“I don’t know how to take it,” she finally said.

How to take what? That kind of adoration?

“Yeah,” she said, scrunching up her face. “What do you say to that? ‘Congrats on being lucky?’”