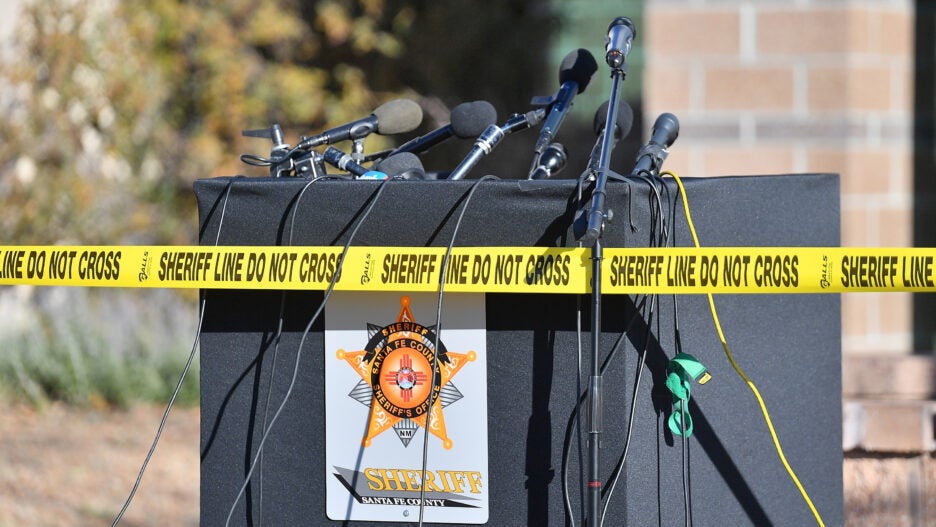 A “live” round was used in the gun that killed “Rust” cinematographer Halyna Hutchins, the Santa Fe Sheriff’s Department and the Santa Fe County District Attorney said in a press conference Wednesday.

A lead projectile was recovered from director Joel Souza’s shoulder, the sheriff said in the conference. A mix of live rounds along with dummy cartridges and blanks were recovered from the set.

The district attorney also added that it was too early to determine whether charges would be filed but that no one has been ruled out to face charges at this point.

Hutchins died Thursday after a gun held by “Rust” actor and producer Baldwin discharged, killing Hutchins and injuring the film’s director Joel Souza. A pair of search warrants from authorities revealed that the film’s assistant director, Dave Halls, had grabbed a gun from a table laid out by armorer Hannah Gutierrez and yelled “cold gun” prior to handing it to Baldwin. The warrants also detailed that Baldwin was rehearsing a scene in which he was “pointing the revolver towards the camera lens” when the firearm discharged.

They added Wednesday that Baldwin, Halls and Gutierrez had all given statements to authorities and were cooperating with the investigation.

While speaking to police last Friday, Souza recalled standing over the shoulder of his cinematographer, Hutchins, while Baldwin was sitting on a wooden church pew and practiced cross-drawing his weapon, only to then hear what sounded “like a whip and then loud pop.” Souza then remembered Hutchins complaining about a pain in her stomach, grabbing her midsection and then stumbling backwards as she was assisted to the ground.

It also confirmed, as previously reported, that several members of the camera crew had walked off the set earlier that day after complaining about housing and payment and that a new crew had to be found to help film the movie. Reid Russel, whom the warrant identifies as a cameraman who was standing next to Hutchins and Souza as the gun discharged, said that the crew wrote a letter to the production over the disagreements and that after stepping out for five minutes after returning from lunch, the team was already in possession of the firearm preparing for the scene. He was unsure if it had been checked again in that time.