Sacha Baron Cohen Duped Them. Here’s What They Did Next.

What differentiates Sacha Baron Cohen, a master of the “Gotcha,” from your run-of-the-mill prankster is his knack for catching notable names in compromising moments.

Now it’s Rudolph W. Giuliani who has been filmed with his hand down his pants after an interview with an actress posing as conservative TV news reporter (Giuliani has said he was tucking in his shirt).

The scene takes place in Baron Cohen’s new movie, “Borat Subsequent Moviefilm,” out Friday. But Baron Cohen has for years been posing as outlandish fictional characters (Borat is a moronic, mustachioed Kazakh journalist) to lure the unsuspecting into ridiculous, potentially embarrassing situations.

Of course, the charades are not always successful (interviews with Donald J. Trump before he was president and Bernie Sanders have both fallen flat). But other efforts have resulted in a resignation, lawsuits and, in one case, by Baron Cohen’s telling, trouble in the marriage of Pamela Anderson and Kid Rock.

In 2018, Baron Cohen persuaded Roy S. Moore, a former Republican Senate candidate from Alabama, to grant him an interview for what he claimed was an Israeli television network, but which was actually his Showtime satire series, “Who Is America?” Baron Cohen posed as an Israeli antiterrorism expert before whipping out a device he claimed was a pedophile detector, which began chirping when he waved it in front of Moore. (Moore had been accused by several women during his unsuccessful Senate campaign of making sexual advances toward them when they were teenagers and he was in his 30s.) Moore became angry — “Maybe Israeli technology hasn’t developed properly,” he said — and walked out of the interview.

Moore sued Baron Cohen, Showtime and CBS for $95 million in damages for defamation, fraud and intentional infliction of emotional distress. He argued that his signature on the release was obtained through fraud and was not valid. As of this month, the suit is still pending. But as Baron Cohen’s previous track record in court demonstrates, it can be tough to win a lawsuit against him — even if the assertions are true. (Experts have said that subjects who sign a release before the interview without reading the fine print — as Moore did — have little legal ground to stand on.)

The former Arizona sheriff who was pardoned by President Trump in 2017 told Baron Cohen, who was posing a Finnish YouTube personality in hipster glasses and a Hawaiian shirt, that he would not be surprised if Trump had taken part in a “golden shower” (an unproven claim from the 2016 Trump dossier that contained salacious allegations about the president’s ties to Russia).

The conversation stayed raunchy, but unlike many of Baron Cohen’s targets, Arpaio stayed for the entire interview. He said he didn’t catch on to Baron Cohen’s sexual innuendos in real time. “I thought I handled myself good,” he told The Arizona Republic after the interview aired. “But it sure didn’t look good.”

In 2018, Jason Spencer, a Republican state representative from Georgia, took part in what Spencer believed was antiterrorism training. Baron Cohen, playing an Israeli antiterrorism expert, convinced Spencer to drop his pants, yell a racial slur, and more, under the guise of learning effective tactics to ward off a terrorist.

Spencer apologized, though he initially resisted bipartisan calls to resign and said he intended to finish out the final five months of his term. But, two days later, he reversed course and stepped down — the first real-life consequence of Baron Cohen’s “Who Is America?” show. (Spencer threatened legal action, but did not ultimately pursue a case.)

Baron Cohen, in character as the Israeli antiterrorism expert Erran Morad, convinced the former vice president to grant him an interview in 2018. He asked Cheney to sign a “waterboarding kit,” which was an empty plastic jug. “That’s the first time I’ve ever signed a waterboard,” Cheney told Baron Cohen’s character. “Very valuable.” (Baron Cohen listed the jug on eBay after the show aired, where bidding went as high as $3,801, though it was unclear if it was sold.) Cheney never publicly reacted to the interview. 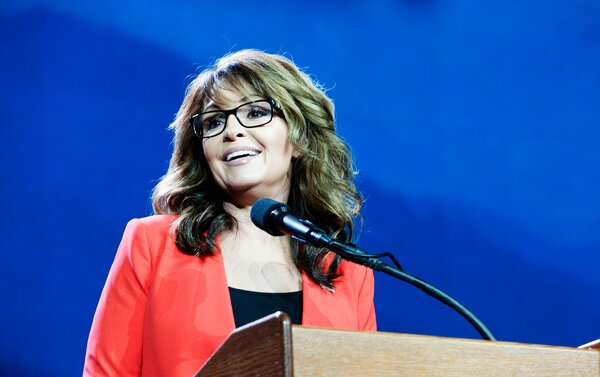 Baron Cohen disguised himself as a veteran who used a mobility scooter to interview Sarah Palin, the former vice-presidential candidate and governor of Alaska, in 2018.

Palin wrote in a Facebook post criticizing Baron Cohen for the stunt that he told her he was a disabled veteran and that she believed the interview was for a “legit Showtime historical documentary.” But she said that the interview was filled with “Hollywoodism’s disrespect and sarcasm” and that she walked out. She also said the production team intentionally dropped her and her daughter off at the incorrect Washington, D.C. airport after the interview, which caused them to miss their flights home to Alaska.

Exactly what happened during the interview is unclear, as the episode was never aired — Baron Cohen told The Daily Beast that “Just like her candidacy for vice president, [Palin] wasn’t good enough to make the show.”

In 2018, Baron Cohen, again disguised as the Israeli antiterrorism expert Erran Morad, persuaded Daniel Roberts, a prominent gun rights activist, to bite on a sex toy he was wearing. Roberts was led to believe the stunt was part of an antiterrorism training exercise.

Roberts said after the episode aired that he had no idea that he had been duped and threatened to pursue legal action, though he did not ultimately. (He told The New York Times that he did not remember whether he had signed a release before the segment, but that it was “highly likely.”)