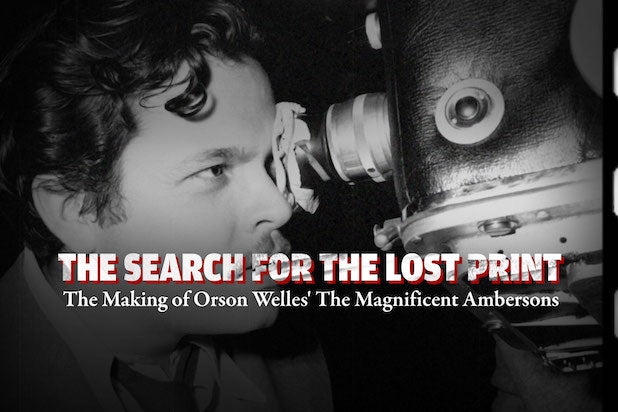 One of the biggest lost treasures of cinema history is the missing, destroyed footage of Orson Welles’ follow-up to “Citizen Kane,” “The Magnificent Ambersons.” And Turner Classic Movies is now working on a documentary about the search for that lost footage.

TCM is teaming with filmmaker Joshua Grossberg, who is leading a search to Brazil to locate the missing reels of the 1942 film “The Magnificent Ambersons” in the hopes of restoring the film for the big screen. TCM will sponsor the latest leg of Grossberg’s search and produce a documentary titled “The Search for the Lost Print: The making of Orson Welles’ ‘The Magnificent Ambersons” about the 25-year process Grossberg has already endured to attempt to find it.

Film historians know the story well, but after disastrous test screenings of “The Magnificent Ambersons,” the film studio RKO cut 43 minutes from Welles’ second feature and tacked on a new, more optimistic ending. The original, excised footage was then melted down for its nitrate for use in World War II and has been lost ever since. Welles was once quoted as saying that “they destroyed ‘Ambersons’ and it destroyed me,” and he even attested that the film would’ve been better than “Citizen Kane” had it made it to the screen as he intended. And it in part led Welles to break away from Hollywood and forge a path as a more independent storyteller and director throughout his career. The film is considered a classic to this day, but that lost potential has tantalized cinephiles ever since.

“The Search for the Lost Print” will include production photos and first-hand accounts from those who viewed it and chronicle the story of Grossberg’s search as well as discuss Welles’ exile from Hollywood after the events.

Grossberg’s return trip to Brazil will begin in fall 2021 and see him renew his search for the lost print as well as interview key players in this fascinating tale. The film will then premiere on TCM in July 2022 in honor of the film’s 80th anniversary. And if all goes well and the print is found and in viable condition, Grossberg and TCM will restore “The Magnificent Ambersons” to premiere alongside the documentary’s release.

Joseph Schroeder and Gary Greenblatt are producing the film for Grossberg’s production banner, Under the Dome Ltd.

“We know it’s a long shot but if these guys are able to find Orson Welles’ version of the film it would be one of the greatest discoveries in the history of cinema,” Charlie Tabesh, ‎senior vice president, programming and content strategy for Turner Classic Movies said in a statement. “It’s too important not to try.”

Though long thought to be impossible, Grossberg got a lead on the missing “Ambersons” footage back in the mid-1990s when a film archivist working for a Brazilian film distributor claimed to have seen the 1960s canisters containing the 131-minute version of the film.

What’s more, the silent masterpiece “Metropolis” was long considered to have footage that was forever lost to time, but historians did manage to track down much of the missing material and restored it to its former glory in 2008 after discovering it in 2008 in a museum in Argentina. Morgan Neville and Peter Bogdanovich also led the restoration and completion of another of Welles’ final, unfinished films, “The Other Side of the Wind” from 2018.

“Considering the missing full-length version of Fritz Lang’s ‘Metropolis’ was discovered in an Argentine museum in 2008, it’s entirely possible the lost print of ‘Ambersons’ survives somewhere in Brazil,” Grossberg said. “To finally be able to track down the leads I developed is exciting and I’m grateful to TCM for their support.”