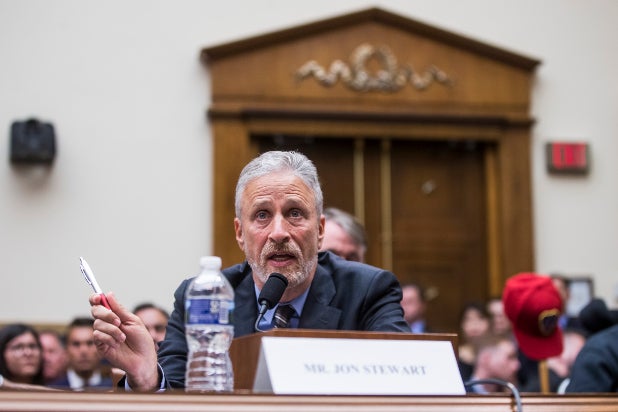 After “The Daily Show” host Jon Stewart on Tuesday helped announce legislation to aid military veterans who were poisoned by dangerous toxic fires called “burn pits,” a new documentary is in the works about the effects of those exposed to the fumes.

The feature documentary “The Burn Pits” will be directed by Zara Hayes (“Dian Fossey: Secrets in the Mist,” “The Battle of the Sexes”) and comes from “40 Years a Prisoner” producer Confluential Films.

Burn pits were regularly used by the U.S. military during the Iraq and Afghanistan wars to dispose of human waste, chemicals, munitions and Styrofoam. An estimated 3.5 million veterans could have been exposed to the fumes, which have been linked to cancers and respiratory diseases. Thus far, the VA has denied many veterans’ benefits, even as vets suffer from diseases linked to burn pits exposure.

The military no longer uses burn pits, but as of March 2019, a report from the Department of Defense noted that there were still nine active burn pits remaining.

On Tuesday, Stewart and activist John Feal worked with senators Kirsten Gillibrand and Marco Rubio in proposing burn pits legislation. They are seeking to secure benefits for sick, active and retired military personnel who have been exposed to burn pits and other toxins while on active duty. This effort follows Feal and Stewart’s work to champion 9/11 first responders through the 9/11 Victims Compensation Fund.

One of the subjects of the documentary “The Burn Pits” is Rosie Torres and her husband Leroy, who is a victim of the burn pits. Rosie Torres is the executive director of a non-profit called Burn Pits 360 that is working to improve post-deployment health outcomes for current and former military personnel.

“More than 3 million service members could have been exposed to toxic burn pits, yet the VA continues to deny them healthcare and compensation by placing the burden of proof on veterans suffering from rare cancers, lung diseases and respiratory illnesses,” Leroy Torres said. “The untold story of how we got here is an American tragedy. It’s time we recognize these injuries as a true cost of war and I’m thrilled to support Zara and the Confluential team in shining a light on our fight to audiences throughout the world.”

“Some stories make their way into your life and demand that you tell them. For me, this is one of them. Rosie and Leroy’s story needs to be known, and I’m honored that they’ve entrusted us to join them on their journey to seek justice for millions of veterans affected by Burn Pits,” director Hayes said.

“This is exactly the sort of important story that Confluential Films wants to be a part of telling. When you dig just a little below the surface of this one, you start to see the tragedy of it, and it’s a story that we feel is important for the world to understand the human toll. We’re thrilled to be able to support Zara and Rosie in bringing this story to light,” Tommy Oliver, founder and CEO of Confluential, said in a statement.

Oliver and Joel M. Gonzales are producing for Confluential Films, alongside Jonathan A. Stewart and Hayes, who is also directing.