The Cannes Film Festival Is Back, Lavish and Maskless (Despite the Rules)

CANNES, France — Maggie Gyllenhaal’s eyes widened. It had been 15 months since the actress was last in a movie theater, a pandemic-era streak she broke Tuesday night at the splashy Cannes Film Festival premiere of “Annette,” a new musical starring Adam Driver and Marion Cotillard.

“It was great, but it was also kind of a shock,” Gyllenhaal told me afterward at the festival’s opening-night dinner. As a member of the jury that awards the prestigious Palme d’Or, Gyllenhaal has a full slate of premieres to attend over the next two weeks. Still, after the pandemic kept the movie industry’s in-person revelry to a minimum, getting reacclimated to all that glitz and glamour may take some time.

“The premiere was like a trial by fire, especially the red-carpet stuff,” Gyllenhaal said. “I haven’t done anything like that in so long. I forgot how intense it is!”

If Cannes has retained its ability to overwhelm, that’s a significant win for this most maximal of film festivals, which returned to the Croisette this week after a two-year break. The last edition, held in 2019, launched Quentin Tarantino’s “Once Upon a Time … in Hollywood” and awarded the Palme d’Or to Bong Joon Ho’s “Parasite,” so expectations were sky-high for the follow-up event. The pandemic scuttled most of those plans.

Though many film festivals went virtual over the past year, Cannes opted to cancel: Without all the marathon-length red carpets, near-endless standing ovations, and bustling beach parties, what would be the point? Instead, many of the films that were originally intended for the 2020 edition, like Wes Anderson’s starry “The French Dispatch,” were delayed for a proper debut on the Croisette this year. 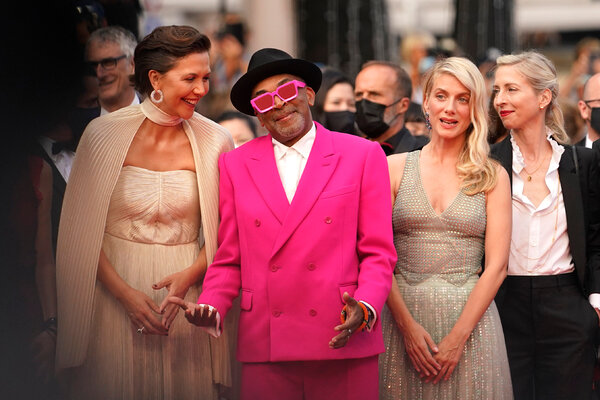 So is it the same old Cannes? Well, yes and no. The opening-night ceremony was as lavish as ever, attracting boldfaced names like the jury president Spike Lee (clad in a Pepto Bismol pink suit from Louis Vuitton); Jodie Foster, who received an honorary Palme d’Or during the evening; and the actresses Jessica Chastain and Helen Mirren. To watch all the celebrities swan down the red carpet in their tuxedos and couture, you would think Cannes picked up right where it left off.

But at the top of the steps of the Palais des Festivals, where the ceremony was held, the Cannes director, Thierry Frémaux, eschewed his usual habit of greeting the talent with a kiss on the cheek, a small but telling concession to the continuing pandemic. Though France has begun easing restrictions as the country ramps up its vaccination rate, concerns about the Delta variant have still made many festivalgoers uneasy.

The pandemic protocol here is wildly inconsistent: Vaccinated visitors from the European Union can move about freely, but American citizens must be tested for the coronavirus every 48 hours, regardless of vaccination status. To attend a news conference, you have to show a negative test result, though getting into the movies themselves is far easier: The theaters simply ask audiences to mask up while inside, regardless of vaccination status.

Enforcing that rule is another matter entirely. Before the start of “Annette” — an esoteric musical with songs from the band Sparks — three-fourths of the moviegoers around me had removed their masks, and the ushers simply shrugged. (There’s a reason the French gave us the phrase “laissez-faire.”) After the movie ended, as the standing ovation went into its fifth minute, Driver and his director, Leos Carax, both lit up cigarettes inside the theater.

Attendees were then taken to crowded shuttle buses and transported to the opening-night dinner at Palm Beach, which got underway after midnight. Instead of the bustling dance parties that usually end each evening in Cannes, the festival has encouraged a switch to dinners, which are ostensibly more spread apart, civilized and Covid-safe.

But in practice, all that up-close hobnobbing is still the same, even if it doesn’t happen on a dance floor. As I entered, Mirren was leaning over a banquette to greet Gyllenhaal; later, Mirren and her husband, Taylor Hackford, plopped down next to Andie MacDowell. At a table nearby, Foster chatted in fluent French with a slew of well-wishers, while Bong embraced his “Parasite” lead Song Kang Ho, who is also serving on this year’s Cannes jury.

The director Pedro Almodóvar spent most of the night in deep conversation with Chastain, though he and I spoke long enough for Almodóvar to praise Driver’s committed performance in “Annette” — “He always takes such risks!” — and to promise that his next film, the Penélope Cruz drama “Parallel Mothers,” would be out stateside in December. “You will see it soon,” he said — though not at Cannes, where his last movie, “Pain and Glory,” premiered.

On my way back to the hotel, I stopped by the “Annette” after-party. Though Driver had beat a hasty retreat after the film’s premiere (he caught a flight back to Cleveland to shoot Noah Baumbach’s “White Noise”), the room was full of drunken revelers anyway.

As they shouted over the music and clinked champagne glasses, I realized that while Gyllenhaal was still adjusting to the full-on crush of Cannes, plenty of people here needed no such grace period. After a year and a half of Zoom and sweatpants, these film professionals were all too eager to get back to the business of pleasure.

At 2:30 in the morning, as the party spilled out into the street, they gave each other the kisses on the cheek that Fremaux had forgone. Some even cast about for their next move, eager to keep the good times going. “Where can we get food this late?” one American film executive asked his friend. He added brightly: “I would kill for chicken nuggets!”