The Long and Winding Road to ‘Yesterday,’ a Film Full of Beatles Music

The premise of the comedy “Yesterday” is surreal and yet tantalizingly simple: What if you woke up to discover you were the only person who still remembered the music of the Beatles? And what if you used this knowledge to recreate these songs for a world that had never heard of this uniquely famous and ubiquitous rock group, propelling yourself to superstardom in the process?

Even if you had tried to make “Yesterday” before its screenwriter, Richard Curtis, and its director, Danny Boyle, got to it, you’d have encountered a massive, yellow submarine-sized obstacle: the characters in your movie would need to perform numerous Beatles songs — enduring hits like “Help!,” “Let It Be” and “The Long and Winding Road” — that have been revered for more than half a century, and that are among the most fastidiously protected assets in popular music.

“Yesterday,” which opens Friday, is not a biography of the Fab Four; it is a fanciful tribute to their work and its lasting power, and while it burnishes their reputation, it also a project that helps new versions of their music reach audiences that have become overly accustomed to the original recordings.

It might have been easier if love was all the filmmakers needed to gain access to the Beatles’ catalog. But it would take a lengthy and careful courtship — and yes, a little hand-holding — for them to obtain these crucial permissions and complete their cinematic tribute to a cherished band.

The story that “Yesterday” tells is essentially “a prism though which to see something that we love, which is pop music, and the music of the Beatles especially,” said Boyle, the Academy Award-winning director of “Slumdog Millionaire.”

Curtis, the screenwriter of “Love Actually” “and “Four Weddings and a Funeral,” said that the Beatles’ songs have become a universal constant of modern life — to the point where he has seen one of his young sons sing “We Can Work It Out” in a school play about the Battle of Hastings.

Beatles songs “have become quintessential expressions for another generation,” Curtis said, adding that the new film was a story “about how music spreads, and how the particular magic of the Beatles is irresistible.”

“Yesterday” began several years ago with a script — at one point called “Cover Version” — written by Jack Barth and Mackenzie Crook; Crook, a star of Britain’s “The Office” and the “Pirates of the Caribbean” movies, would have directed.

Early in the film’s development, its producers sought the help of Nick Angel, a longtime music supervisor for films and TV series as well as a former record-label executive with a deep roster of music industry contacts. Their concern was that the Beatles songs were so fundamental to the film that it wasn’t worth pursuing without them.

“This is like buying the underlying rights of a book to turn into a movie,” said Angel, who is an executive producer of “Yesterday.” “If you can’t get the book, you can’t get going.”

And at that preliminary stage, Angel said, “there was a fairly large degree of skepticism that either the songs wouldn’t be obtainable or they would be so astronomically expensive as to be unobtainable.”

There was no plan B without the Beatles, either; though there were other pop and rock acts with catalogs full of hits — the Rolling Stones, Prince, Elton John — none had made music that felt as all-encompassing and none were contemplated as alternatives.

“So many of those artists, you need the artists as much as the songs,” Angel said. “The Stones’ songs are brilliant, but they’re also about Jagger and Richards, whereas the Beatles songs are just incredible melody after incredible melody.” 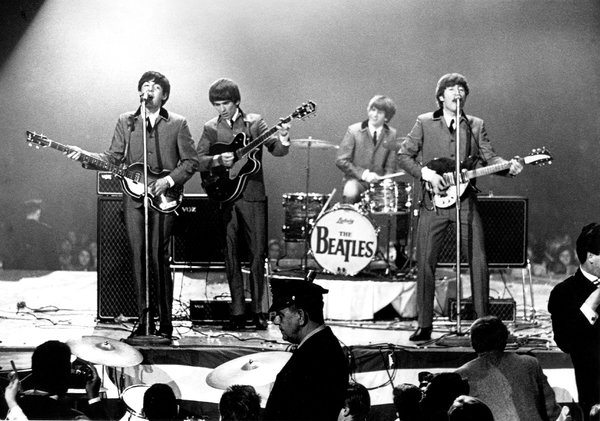 Angel and his colleagues started discussing the film with Apple Corps, the Beatles’ company, and with Sony/ATV Music Publishing, which holds the copyrights to most of the band’s songs, including those written by John Lennon and Paul McCartney. (In 2017, McCartney reached a confidential settlement with Sony/ATV after he sued to reclaim his rights to his songs.)

Nick Oakes, who is Sony/ATV’s head of sync and creative licensing in the United Kingdom, said that interest in the music of the Beatles remained strong. “We’re inundated with requests to use the Beatles’ catalog all the time, and obviously we have to be very careful about what we move forward with,” he said.

Oakes said that when the company is deciding whether to license a song for use in a movie, a video game or an advertising campaign, several criteria are considered: Who is behind the project? How prestigious is it? How big is it and how widely will it be seen?

Though these factors can seem subjective, Oakes said that each project must ultimately feel respectful of the Beatles.

Individual Beatles songs have been heard and performed in various movies over the years. But very few films in which the band was not directly involved have used whole swaths of its catalog, and those movies are not remembered all that fondly. The rogues’ gallery includes “Sgt. Pepper’s Lonely Hearts Club Band,” the dopey and much derided 1978 musical that starred the Bee Gees and Peter Frampton; and “Across the Universe,” a ’60s-era period romance directed by Julie Taymor that was a box-office misfire in 2007.

In recent years, Oakes said, Sony/ATV had been approached with other Beatles-related pitches that were ambitious in scope but “none of them really got out of the starting blocks.”

Angel said that after his earliest conversations with Apple Corps and Sony/ATV, he felt he’d heard “positive noises, that should this come to pass and get made, they would look upon it favorably.”

As he and his producers further discussed the film and met with production companies, Angel said, “We also knew that we needed to get the script worked on and developed more.”

Here, Angel turned to Curtis, who was hooked by the film’s underlying plot device but wanted to write his own screenplay. “I’m not good at working on other people’s material,” Curtis said, “but I loved that idea and I said if you just leave it at that, I’d love to have a go at writing the script.” (He shares story credit on “Yesterday” with Jack Barth.)

Curtis is a lifelong Beatles fan who, at the age of 8, once waited outside a Swedish hotel just to watch the mop-topped bandmates step onto their balcony.

In the film, a struggling singer-songwriter named Jack Malik (played by Himesh Patel) becomes the unexpected beneficiary of the Beatles’ creative output, leading him to the precipice of a life filled with fortune and adulation.

But the film is also about the feelings of fraudulence and illegitimacy that artists experience, and how these feelings are amplified by success: “You fall further when you’re found out,” Curtis said.

With Curtis came the involvement of Working Title, the British film and TV company owned by Universal, where Curtis has a production deal. Boyle, whose films include “Trainspotting,” and “28 Days Later,” became its director soon after. With each of these developments, the Beatles’ rights holders felt the film grew more credible and worthy of the band’s music, while telling a tale that glorified its work.

“It’s the message of the film that the world is a lesser place without these songs,” Oakes said.

Beyond the homage, “Yesterday” is also a commercial opportunity. The band remains one of the most successful acts of all time, but it still needs to find innovative channels to reach new listeners and new ways to present familiar songs.

“There has been a generational change,” said Tim Bevan, the co-founder and co-chair of Working Title. “My kids, they know who the Beatles are. Do they listen to them regularly? It would be a lie to say they do that. I think the opportunity to hear these great songs in a film in 2019 is a good thing.”

Bevan added, “My 15-year-old boy saw the movie and I’m used to hearing some ghastly rap coming out of his bedroom. And I wandered by that evening and I heard the dulcet tones of Paul McCartney singing. So it worked for me.”

A deal was struck between Sony/ATV and the “Yesterday” filmmakers, allowing the use of 17 Lennon-McCartney compositions. This covered scenes of Jack performing in concerts and recording sessions, as well as comedic moments when Jack can’t completely remember the lyrics to “Eleanor Rigby” or when it’s suggested to him that he record the classic anthem “Hey Jude” as “Hey Dude.”

Though publications like Billboard have estimated that the licensing fees for “Yesterday” may have cost as much as $10 million, Sony/ATV declined to comment on the financial terms of the deal. (The filmmakers also used the songs like “Here Comes the Sun,” “Something” and “While My Guitar Gently Weeps,” which were written by George Harrison and whose copyrights are owned by his Harrisongs publishing company.)

Curtis said he was given no instructions nor restrictions on which Beatles songs he could use in the screenplay, though he favored well-known tracks.“We definitely had to veer towards popularity,” Curtis said, “because a lot of the moments are, oh my God — he’s playing that?”

Boyle said he did not insist that any particular songs be included, either — that is, aside from advocating the use of “Ob-La-Di, Ob-La-Da” at the end of the movie.

“There’s a bit of reggae in it,” said Boyle, noting that his all-time favorite rock group is the Clash. “I love it when these British pop groups have their first flush of ingenuity and then they turn to reggae.”

As “Yesterday” nears its release, the filmmakers find themselves walking the same fine line they did throughout its creation. They are not seeking the formal endorsement of the Beatles, but they are hopeful that the surviving band members and the Lennon and Harrison estates see the movie as an act of affection and admiration.

“You don’t expect wild vindication or anything like that,” Boyle said. “But you have to pay your respects.”

So far, there has been some encouraging feedback. Ringo Starr said in an email, “I loved it. It’s a great premise — he’s like us but nobody knows him.” Starr added, “I thought the vibe of the movie was great and it’s really interesting — especially if you’re one of them.”

The band also gave permission for its own recording of “Hey Jude” to be played over the closing credits, the rare use of an actual Beatles track (rather than a cover version) in a movie. “That was something everyone felt would be a good and respectful thing,” said Bevan, the Working Title co-chair. “They would never have done that if they didn’t like the film.”

Curtis said he tried not to worry inordinately about what judgment the Beatles might render on “Yesterday.” But he did write to McCartney and ask for his blessing to title the film after one of his tracks.

“It’s everybody’s word but it’s his song,” Curtis said. “In the context of a Beatles movie, it fairly obviously refers to him. And he did write me back and said, ‘I think you might find ‘Scrambled Eggs’ works better” — invoking the placeholder lyrics that McCartney had used when he only had the music and no words for the song.

“It was actually a very funny name for a movie,” Curtis recalled. “But he said, ‘If you’re not willing to accept that suggestion, I suppose ‘Yesterday’ is all right.”

Dave Itzkoff is a culture reporter whose latest book, “Robin,” a biography of Robin Williams, was published in May. @ditzkoff