The Sly Superpower of ‘Hustlers’

Jennifer Lopez apologized for how she smelled. That light waft of cigarette smoke, she said, gesturing with a faux-tattooed arm. Maybe it was her, maybe it was embedded in the white couches and plush carpeting, here on the 29th floor of a midtown Manhattan high-rise. Either way, the mood was set.

It was near the end of shooting for “Hustlers,” a spiky-smart drama in which Lopez plays a Bronx single mother — “so that comes easy,” she said — and a stripper extraordinaire who masterminds a scheme to con her Wall Street clientele out of money by nearly any means necessary. A moment later, she and her co-star, Constance Wu, were filming a scene in which they cook up the MDMA-ketamine concoction they would use on their marks.

“How much?” Wu, playing a newbie named Destiny, asked. “Just a sprinkle,” Lopez, as the wily, cigarette-dangling Ramona, advised. 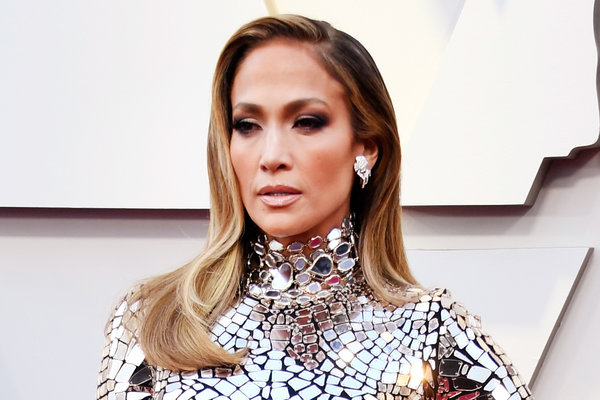 The writer-director, Lorene Scafaria, stood watching behind the camera, surrounded by sheets of aluminum foil flaked with prop drugs. It’s only the third feature she’s made, and the flashiest by far. “Hustlers” is based on a real-life tale, which appeared in New York magazine in 2015, about a crew of high-end strippers in New York who — after their customer base deflated thanks to the 2008 recession — found creative, and illegal, ways to keep business going. (They were eventually caught.)

Though the story dates back a decade, its themes — gender dynamics, economic inequality, sex, cash and female solidarity — resonate richly now. So much so that the movie is being rushed into theaters less than six months after filming ended. (It opens Sept. 13.) “Why hold back?” said Jessica Elbaum, one of the producers who immediately optioned the original article, by Jessica Pressler.

“We’re white-knuckling because of the buzz — there’s such a spotlight on this,” added Elaine Goldsmith-Thomas, Lopez’s longtime producing partner, sitting by the monitors on set with other producers (most of them women).

The gleam comes in part because of Scafaria’s savvy casting: “Hustlers” marks the big-screen debut of Cardi B, herself a former stripper from the Bronx, along with appearances by of-the-moment artists like the singer Lizzo; the actress and trans advocate Trace Lysette (“Transparent”); Lili Reinhart (“Riverdale”); and Keke Palmer (freshly announced as a host of the third hour of “Good Morning America”).

Note the absence of a leading man: There really isn’t one.

For Scafaria, 41, that was the lure of the source material. “Because it was like every good story that you ever read — but with women in it, naturally,” she said. “It wasn’t something that had to be manufactured into an all-female anything.”

Dressed in full bodycon to celebrate their first score in that Midtown high-rise, the central foursome — Wu, Lopez, Palmer and Reinhart — whooped it up for the cameras, spraying Champagne and doing a choreographed routine to Janet Jackson’s “Miss You Much.” (“Swing it, bust it, cradle it,” as Palmer described her swerving moves.) 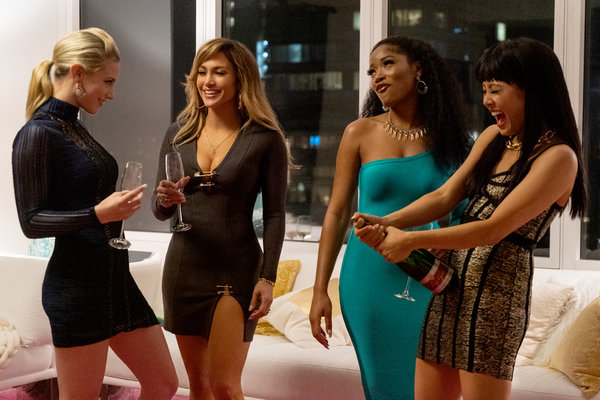 “Louder!” Lopez called to the sound techs. “Don’t be cheap!”

“We’re a family now,” she crowed in character as Ramona. “A family with money!” The stars kept dancing after the scene stopped; Scafaria jumped in, too, holding her own with the hip swivel.

Here’s the sly superpower of “Hustlers”: It’s serving us a Hollywood stripper romp, but pivoting to show that life from the women’s point of view. Witness bikini-bod JLo wrapping an adoring Wu into her fur coat on the club rooftop — the very first scene that Scafaria wrote. It plays up Mama Bear relationships in a way that felt familiar to Lopez. (“They call me Ma a lot, the people that work with me,” she noted.) But it’s also transactional, an unabashed display of wealth-envy. It’s intimate but not sexualized — focused on Wu’s female gaze. “Hustlers” has a rare vantage point, as perhaps the only high-caliber feature about strippers made by a female filmmaker.

Rarer still, it doesn’t exoticize the profession. And when it comes to the crimes the women eventually commit, there’s no sugarcoating. The opening montage, which tracks Wu through the club, echoes the Copacabana scene in “Goodfellas.” That movie was a touchstone for Scafaria, as she was making her pitch. Because, she said, when it comes to depictions of men in an underworld behaving badly, “we can name 1,000 of those characters by their first and last names. We’ve enjoyed them.”

Real-life female baddies are still so uncommon onscreen, though, that they almost seem heroic, not dangerous, by default. “There’s no doubt that people are going to think it’s a female empowerment movie,” Wu said, “because if you look at the highlight reel of the movie, it’s badassery.”

But she added, “We’re not trying to romanticize that life. Whereas in ‘Goodfellas,’ the first line is, ‘I always wanted to be a gangster.’”

The story is told through Wu’s character, who begins working at a club out of economic necessity, only to realize that stripping has its own financial hierarchy. Dancers are often at the bottom; club managers, security and D.J.s can all take a cut. The drug-and-fraud scheme that Lopez’s Ramona concocts — and the leg-up she offers as a friend — is a lifeline, especially in the wake of the recession, when the status the women have precariously reached tumbles down. The movie, said Wu, focuses on “the societal structures they have grown up in and the backgrounds that have given them very few choices of how to survive and flourish in this world.”

Authenticity mattered. Scafaria and her cast made many visits to strip clubs, and had a stripper as an expert and comfort consultant on set. “She would say little things like, ‘The guys say “please” a lot more,’” Scafaria reported. They shot in an actual club, Show Palace in Long Island City, Queens, where, after an open call, they cast several real-life dancers and a manager.

Lopez and Wu committed themselves to the moves, installing stripper poles in their homes to train. Even for Lopez, a lifelong dancer, it was jolting. “I was incredibly nervous,” she said. “I had to be up there, and I had to kind of bare myself — my soul and my physical body — in a way that I hadn’t in any other movie.”

And she was surprised at the skill and stamina required. Filming her showstopping routine over several days at the club in May, she hurt her arm, “and it still hasn’t recovered,” she added.

For Cardi B, who appears in a few memorable club moments, the film hit home. In an Instagram live message she posted immediately after a screening, she was on the verge of crying as she recalled her dancing years. “Sometimes — a lot of times — I always remember when I first started, how hard it was,” she said, dabbing at her eyes. She got customers’ attention, eventually: “I was just that bitch, oooh baby,” she said, giving the camera a meaningful glance. “But it took time for me to get there, and it took training, and it took long hard nights of dealing with” less than savory people (to paraphrase). “Like, it took a lot of my self-esteem away, but then it also built some self-esteem, because I felt so powerful at times.”

Customers, she said, tried “to hustle me any type of way. They try to hustle me out of my body.”

But the friendships she made with other women at the club, and the lessons they taught, changed her life, she told her followers. “I be feeling like nobody can hustle me anymore.”

The movie brought all that back, “like, wow,” she said, adding: “I recommend every stripper to see it. Especially if you are a New York stripper — like, you definitely will relate.”

The group scenes with Cardi B, Lizzo and the rest of the diverse cast stand out — the performers were chosen in part to showcase that real strip clubs, unlike the typical Hollywood version, have bodies of all shapes and sizes.

Wu decided not to plump up her own bikini top: “I thought, wow, could be fun, to have a strip club movie with a lead actress who is like, completely flat-chested,” she said. And she shelved her vanity. “There was a hot minute where I was like, ‘Oh my God, I should work out every day,’” she said. “But this character, she probably didn’t have the time or money to hire a personal trainer. And I want to represent her the way that her life was.”

(Cardi B, to her own dismay, did not work the pole in the movie — she couldn’t, she explained in another interview, because she had just had lipo and her boobs done — but she made the scripted lines her own.)

Those big group scenes were among the last to be shot, and for the filmmakers, most delivered on their vision — not least because the movie had fallen apart in development exactly a year prior. A victim of upheaval at a previous production company, Annapurna, it was subsequently picked up by STXfilms.

Scafaria originally came onboard as a screenwriter; as her script was sent to the likes of Martin Scorsese, she started making her own case to direct, complete with a sizzle reel, heavy on images of powerful female foursomes, to explain her concepts. “I’m so glad Scorsese said no,” Elbaum, the producer, said.

To get the movie done in the 29 days allotted for filming, Scafaria and her cinematographer, Todd Banhazl, detailed every scene and music cue, with the first half heavy on montages — by design, to convey the characters’ heady rise at the club. Scafaria felt a little bad, she admitted, “about all the fur coats and smoking in this movie.” But the pace, she added, “was always a freight train, even on paper.”

Her editor, Kayla Emter, cut as they shot; five days after they wrapped, Scafaria saw an assembled version of the movie. “I wept with relief, like genuine relief,” she said. In early July, having taken almost no days off for months, she and Emter were in a darkened editing suite in Burbank, Calif., figuring out where to put the hot-pink title credits.

The film still manages some twists: As the women’s criminal plot intensifies and then unravels, the storytelling becomes more layered (Julia Stiles plays a journalist who connects the dots).

“It gets ugly,” Lopez said of what the foursome pull off. Watching the first screening as a producer, she was suddenly put off by her own character (an amalgam, not a direct representation). “She is a beast, she’s brutal,” Lopez said. “I don’t think she ever felt bad.”

That’s a reason the movie intrigued her: “Like, be careful, these things could be glamorous and sexy — but they could also be dangerous, and they can finish you,” she said.

For Scafaria, the culture of strip clubs offers a way to explore power onscreen — the way the dancers onstage are trying to tip the balance, dollar by G-string dollar, in their favor. “I’m hoping that the conversation outside of the movie is about gender, and the economy — what it is that we provide, and what we get back. It’s not quite the fair trade,” she said.

But mostly, she added, “I just care if sex workers like it. I made the movie for sex workers. As long as they like the movie, great. If women like it, really great. And if men like it, that’s cool, too.”

Melena Ryzik is a roving culture reporter and was part of a team that won a Pulitzer Prize in 2018 for public service for reporting on workplace sexual harassment. She covered Oscar season for five years, and has also been a national correspondent in San Francisco and the mid-Atlantic states. @melenar