‘The Woman King’ and Intimate Moments Amid Epic Action

The director Gina Prince-Bythewood is known for her attention to character, but she made this historic saga of female warriors on another scale altogether.

The more Gina Prince-Bythewood learned about the Agojie army, “the more I got excited about putting this incredible culture — and us — onscreen in a way that we haven’t been able to see ourselves.”Credit…Erik Carter for The New York Times

From her debut feature, the rom-com classic “Love and Basketball,” to her most recent action hit, “The Old Guard,” Gina Prince-Bythewood is known for films with rich character introspection amid outward chaos. That touch is evident again this fall even as she widens her cinematic playing field with the fact-based battle epic “The Woman King.”

The period film follows a troop of fierce woman warriors, the Agojie, as they defend the West African kingdom of Dahomey from slave traders, domestic and foreign. Led by Viola Davis as General Nanisca, the women live in their own corner of the palace of King Ghezo (John Boyega) in a man-free enclave as they hone their combat skills. Into this environment, Nawi (newcomer Thuso Mbedu), a young girl unceremoniously dumped at the palace, begins training alongside more experienced soldiers played by Lashana Lynch and Sheila Atim.

In a video interview, Prince-Bythewood explained how she went about tackling what would be, logistically, her biggest film yet. These are edited excerpts from that conversation.

Tell me about how the scale of this movie was different from things you’ve done before.

When I met with Viola and Cathy [Schulman, a producer] to get the job, I said to them, I felt all my work until this point led me to be able to tell this story the right way and give it the epic scale it deserved, to do the action the right way, to showcase these women in the way they deserve to be showcased, given all the things I’ve learned, not only on “The Old Guard” with action but just in storytelling. Do you care about the characters? Do they feel real to you? That’s where every really good movie starts. 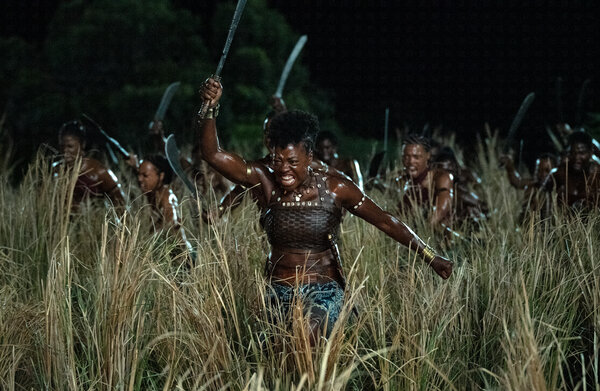 How did this production come to you?

About five years ago, I read that Viola Davis was going to do a film about female warriors, and I said to myself, “Why didn’t they come to me for that?” [Laughs] But then they did; they had come to me as a writer-director, but the script had to be written. I think I was on “Silver & Black” [a superhero project that was ultimately canceled], so I couldn’t take on the writing, but I said, “Please come back to me when you have a script.” You say that a lot, but I really did mean it.

And then they came back to me with the script [credited to Dana Stevens from a story by Stevens and Maria Bello]. At that point, “Black Panther” had come out, and I remember reading that the Dora Milaje in “Black Panther” were based on real-life warrior women. People were calling them Black Amazons, and they actually had a real name, which was Agojie — that’s when I first heard about them. As soon as I read the script, I knew in five pages that I had to do this movie. It was just excitement, excitement, excitement, because the story was entrenched in truth and a specific war that happened at a specific time, then led to a bigger war against colonizers. The more I learned about them, the more I got excited about putting this incredible culture — and us — onscreen in a way that we haven’t been able to see ourselves.

I’m glad you mentioned the Dora Milaje before I did, because you’re definitely going to hear comparisons to them. How do you take that?

Based on “The Secret Life of Bees” and “Love and Basketball,” you like introspective character moments, especially with women. How did you achieve such moments within the scale and spectacle of “The Woman King”?

I feel like the intimate moments were as important as the big set pieces. Set pieces and action do not matter if you don’t care about the characters. So I love to take the time to allow an audience to understand who people are, where they come from, their relationships with others. The sisterhood of this film was so important, the humanity of these women was so important: I wanted to take the time to establish that so when you see Viola fighting in the Oyo battle, you care. You’ve got to invest that time. I love doing action, but I love doing two people in a scene. [Lynch’s character] Ezogie braiding [Nawi’s] hair and talking to her about, “You’re more powerful than you even know” — I get off doing that scene equally as I do doing a big battle scene.

Do you find that action surrounding such internal scenes can threaten to overpower them?

Great action magnifies who a character is. You can tell so much story within an action scene. But you’ve got to know who Ezogie is from the outset and the way she fights. That was fun to create: What is your fighting style, and what does that say about your character? To be able to do that with the actors, that’s all the fun stuff.

Where did you film, and what were some of the challenges of being on location?

We shot in South Africa, the majority in Cape Town. We built our entire palace there. But the first two weeks of filming was in KwaZulu-Natal, where we shot a lot of the deep jungle stuff. That was incredible to be in that environment; that’s also where Thuso is from, so the fact that her first movie she got to shoot where she was born and raised was amazing for her.

When we got back to Cape Town, Omicron hit us, and that was really tough because we had to shut down for a couple weeks. Scariest thing, we were three weeks into shooting. I didn’t know if we were going to come back. Was Omicron going to keep doing this, or was it going to plateau?

Was your fear that you’d have to scrap the film altogether, or just delay it?

I thought we were going to have to scrap it.

Sticking with South Africa, let’s talk about Thuso. You said this was her first film. What did she bring to the film that you had to have?

She can go toe-to-toe with Viola Davis! Like, who can do that? She did that. Thuso’s so smart about character, she pays attention to everything — detail is so important to her. She’s so passionate and so good. I loved just watching her in scenes.

Let’s talk about the fight scenes. The actors did some of their own fighting and stunts in a battle-heavy movie.

To each one of them, including Viola, I had to look [them] in the eye and [say], “You’re going to do your own fighting and stunts. Are you willing to do everything you have to to embody these characters?” And everyone said yes. But it’s one thing to say yes, it’s another to really do it, and I’m talking months of work. You have to have an incredible mind-set to do that. The beauty of it is that type of training is part of the rehearsal process. It helps you build character, it helps bond them. But they have such great pride now when they get to see what they did. I mean, that’s really them fighting.

It amazes me that there’s this narrative that women aren’t warriors, aren’t tough. These women put themselves through so much to be able to do what they did on set, and in an action film, you should never get injured, but you will get hurt at some point — a stray punch or you land wrong — and all of these women got hurt and would not stop. I love it, because I’m an athlete, and to see that from them was really beautiful.

Another thing I think that’s going to be immediately appreciated and a fact that kept coming into my head is: Little girls are going to see all these natural hairstyles, and that is huge.

Sheila is the one that said she wishes her 12-year-old self had this film. And, yeah, that’s the thing we’re most excited about: How can this change the way that we see ourselves, especially little girls? Do you get to now grow up and see yourself heroically, and can you take that in for yourself? I’m really hoping that for this film.