Segment was broadcast from sports bar in Lyon, France 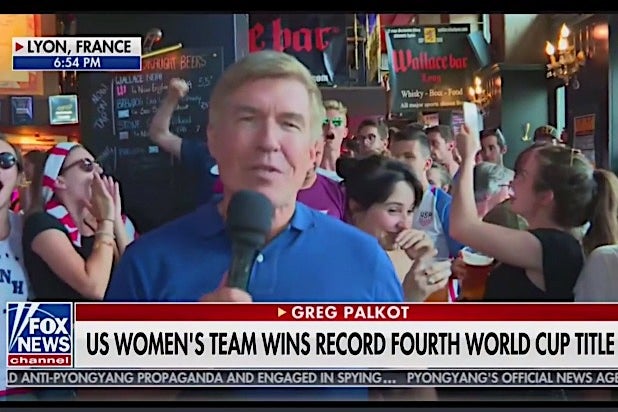 Following the U.S. Women’s Soccer team’s victory in the FIFA World Cup on Sunday, a Fox News segment from a sports bar in France took an expletive-filled turn after American fans can be seen and heard chanting “f— Trump” in the background.

The segment from Fox News reporter Greg Palkot was broadcast live from a sports bar in Lyon, France, where the final match between the U.S. and the Netherlands took place. While Palkot was explaining how an outdoor broadcast of the match was cancelled for security reasons, one of the fans near the camera started the chant against the president.

Later, while Palkot interviewed fans at the bar, some yelled “U.S.A. Democrats” and “Get that racist out of the White House!”

Donald Trump became part of the discussion surrounding the U.S. soccer team after captain Megan Rapinoe said she would not go “to the f–ing White House” if the team won the World Cup. President Trump was swift to respond in a series of tweets.

“I am a big fan of the American Team, and Women’s Soccer, but Megan should WIN first before she TALKS! Finish the job! We haven’t yet invited Megan or the team, but I am now inviting the TEAM, win or lose. Megan should never disrespect our Country, the White House, or our Flag, especially since so much has been done for her & the team,” the president wrote in part.

“I think that I’m particularly and uniquely and very deeply American,” Rapinoe told ESPN Wednesday. “If we want to talk about the ideals that we stand for, all the songs and the anthem and sort of what we were founded on, I think I’m extremely American.”