Vanessa Kirby Has Been Waiting for a Role That Scares Her

LONDON — Vanessa Kirby has never given birth, but after shooting her first lead movie role in “Pieces of a Woman,” she kind of feels like she has.

“Whenever I see a pregnant woman now, or someone’s telling me that they’ve just given birth, I smile,” she said in a recent video chat. “I feel with them.”

The two full days she spent shooting a searing scene for the film could explain this psychic confusion, as could the thorough way Kirby, 32, immersed herself in the role.

In “Pieces of a Woman,” which debuts Jan. 7 on Netflix after a limited theatrical release in December, Kirby plays Martha, a pregnant woman whose home birth goes horribly wrong.

This pivotal event at the beginning of the film plays out in a 24-minute, single-take scene that starts with Martha’s first contractions and ends in tragedy. The camera follows Martha, her partner Sean (Shia LaBeouf) and a midwife, Eva (Molly Parker), around the couple’s apartment, condensing the agonies of labor into under half an hour.

In September, the film premiered at the Venice Film Festival, where Kirby won the best actress award, and began to be talked about as an Oscar contender.

Kirby said she wanted to portray Martha’s labor as authentically as possible. “That was terrifying, because I didn’t want to let women down,” she added.

So she got down to research. Watching many onscreen depictions of birth left Kirby no closer to understanding the experience, she said, since they were so censored and sanitized.

“Then I was even more scared, because I realized that I had a responsibility to show birth as it is, not as it’s even edited in documentaries,” Kirby said.

She talked to women who had given birth and women who’d had miscarriages, as well as midwives and obstetrician-gynecologists at a London hospital. While she was there, a woman arrived having contractions, and agreed to let Kirby observe the birth.

The experience of watching that six hour labor “changed me so profoundly,” Kirby said. “Every second of what was happening to her, I just absorbed.” 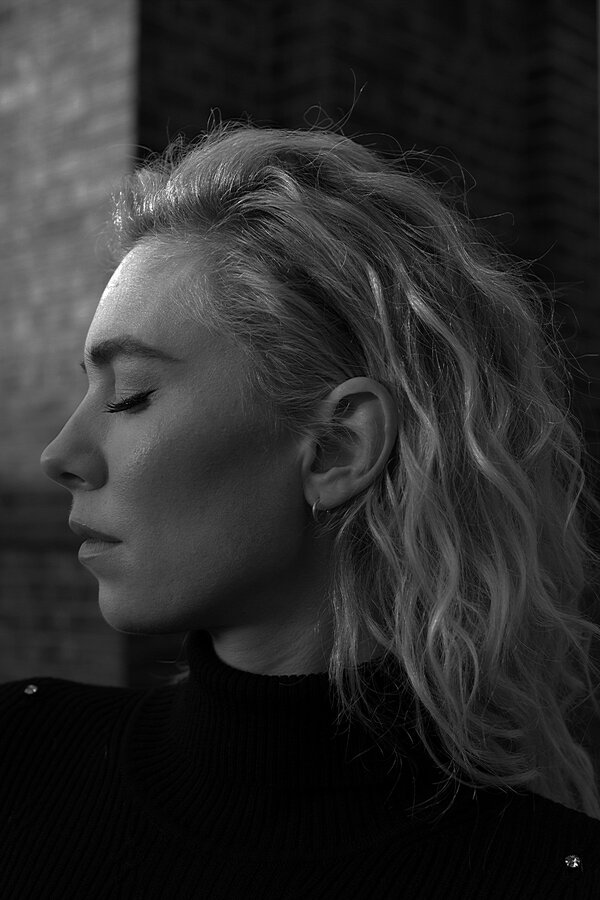 And she began to understand how to play Martha. The woman in the hospital went into a primal, animal-like state, Kirby said. “Her body was taking over and doing it, so that helped me so much for the scene,” she added.

Over two days, that long take was shot six times. In a phone interview, the director, Kornel Mundruczo, who also works in theater and opera, said that preparing it was like getting a stunt scene ready: “Lots of planning, but you don’t know what’s actually going to happen.”

In the end, each take was different, Kirby said: Martha and Sean’s conversations shifted, the way Martha’s body reacted to the contractions was distinctive each time.

“It was, I think, probably the best career experience I’ve ever had,” Kirby said of those two days of shooting. Inspired by the labor she’d observed, she tried to think as little as possible, she said, and not judge what her body was doing in the scene.

After a decade of work, “Pieces of a Woman” is Kirby’s first time leading a feature film, and it is a bold and memorable role that shows her flexing her acting muscles. Mundruczo said he needed an actor at Kirby’s exact career point: “Where all of the skills are already there, but the fear is not,” he said. “When you are very established, you are more and more careful.”

Kirby has been honing those skills since she was a teenager. She grew up in a wealthy, West London suburb, where she attended a private, all girls’ school and escaped the social pressures of teenage life onstage, in plays and youth drama clubs.

“Every time I walked into that space, I suddenly felt not judged at all, I just felt accepted,” Kirby said. “You didn’t have to be anything, or do anything right.”

After graduating from college, where she studied English literature, Kirby was accepted to the prestigious London Academy of Music & Dramatic Art in 2009. A few months before term began, though, she was offered three stage roles by David Thacker, a former director-in-residence at the Royal Shakespeare Company, who was then the artistic director of the Octagon Theater in Bolton, a town in northern England.

Come to Bolton, he told her, and you will learn more from these roles — which included Helena in “A Midsummer Night’s Dream” and Ann Deever in “All My Sons” — than you will in three years of drama school. Kirby agreed, and now describes that season as her training.

“I learned everything there,” she said. Working with Thacker taught her to trust herself, to find her own way as an actor, rather than waiting for other people to tell her what to do, she said.

Kirby has been working steadily ever since, with lead roles in the West End, as well as high profile supporting roles in films and British TV costume dramas. She starred as Princess Margaret in the first two seasons of “The Crown,” a performance that earned her a BAFTA award. Her Margaret fizzes with restless energy, an ideal foil for Claire Foy’s restrained Queen Elizabeth.

In 2018’s “Mission Impossible — Fallout,” she played the White Widow, a glamorous black-market broker who carries a knife in her garter, and knows how to use it. She is slated to appear in two further “Mission Impossible” sequels.

Even as these supporting roles brought her critical praise and awards, Kirby wasn’t in a hurry to find her first onscreen lead role, she said. She’s played many complex characters onstage: women like Rosalind, the fiercely intelligent heroine of Shakespeare’s “As You Like It.” She was holding out for an onscreen lead in whom she could feel some of Rosalind’s “magic,” she said, which made performing “like flying when you step onstage.”

“I could never find those roles at all onscreen,” she said. So she waited, using her smaller parts as opportunities to observe and learn, asking Anthony Hopkins about his craft when they worked together on the British TV drama “The Dresser,” and watching how generous Rachel McAdams was onset for the film “About Time,” she said.

It’s fitting, given Kirby’s theatrical background, that “Pieces of a Woman” started life as a play, written by Kata Weber, Mundruczo’s partner, who drew on the couple’s own experience of losing a child. The play “Pieces of a Woman,” which is set in Poland, consists of only two scenes: the birth, and an explosive dinner with Martha’s family that occurs about halfway through the film adaptation. Its 2018 premiere, directed by Mundruczo at the TR Warszawa theater in Warsaw, was a hit, and the production is still in the company’s repertoire.

Around the time Mundruczo turned 40, five years ago, he started wanting a bigger audience for his work, he said, so he switched from working in German, Hungarian and Polish; “Pieces of a Woman” is his first English language film. In adapting the play for the big screen, Mundruczo set it in Boston, he said, because he felt the city’s Irish Catholic culture mirrored Poland’s conservative social landscape.

The loss of a pregnancy is rarely featured in onscreen entertainment. Mundruczo said he hopes watching Martha’s experiences will encourage “people to be brave enough to have their own answer for any loss,” he said.

In recent months, the model Chrissy Teigen and Meghan, Duchess of Sussex, (writing in The New York Times), have shared stories of their experiences with pregnancy loss. Kirby said that, while researching for the role before filming, she found that women who had experienced one were “actually really relieved to talk about it,” and appreciated that someone wanted to understand.

“Pieces of a Woman” was shot over just 29 days last winter, but Kirby said it took months for her to shake off the experience of playing Martha. “I knew my job was to feel it, to feel what she felt,” she said. Carrying that degree of empathy was “really difficult and disturbing,” she said, but added that the privilege of spending time inside another’s experience is what she loves about her work.

Kirby’s next project will see her co-starring as Tallie, one of two farmers’ wives who fall in love in the United States in the 19th-century in “The World To Come,” a meditative drama from the Norwegian filmmaker Mona Fastvold slated for theatrical release next month.

And after that? Kirby said she was reading scripts, on the hunt for the next role that will scare her. She’s looking for an “untold story about women,” she said, that will feel as urgent to tell as Martha and Tallie’s did.

“What’s that expression?” she said. “Feel the fear, and do it anyway.”