The boss of the UK’s third largest cinema chain has a simple solution to the industry’s Covid-19 crisis. “We will survive, we just need movies,” says Tim Richards, chief executive of Vue.

The postponement last week of the latest James Bond film release triggered an existential crisis in British cinema that means by Friday a fifth of cinemas across the UK will either be closed or operating on weekend-only hours.

Vue, with its 91 sites, was banking on the Bond film too, until its November release was pulled last Friday and shunted into April. This triggered an industry meltdown as the UK’s biggest chain, Cineworld, said it would temporarily shut its 127 British cinemas from Thursday and Odeon announced that a quarter of its 120 sites would operate at weekends only.

“We are still looking at all options and I think Friday’s news was a surprise, it did catch us off guard,” says Richards. “We re-opened on the basis that we were going to be getting movies that then didn’t arrive. There are a lot of players that do not have the size and scale Vue does that will not survive.”

The financial situation of some key players is precarious. Odeon and Cineworld have particularly stretched balance sheets after debt-fuelled acquisition sprees in recent years, having banked on the continued success of the cinema business which hit an all-time global box office of record of $42bn (£32.5bn) last year.

Their problem is that Hollywood studios and film distributors remain unconvinced movie-goers are ready to return en masse in a world of Covid restrictions. Studios are not willing to risk having their big budget films fail at the box office, while cinema owners cannot prove there are big audiences waiting to return without fresh hits to attract them. The short term outlook is dire: the UK box office is unlikely to hit £400m this year, down from £1.25bn last year, the smallest take since the mid-1990s. 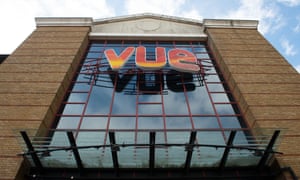 The list of blockbusters that have had their 2020, or even 2021, premiere delayed continues to grow and includes Jurassic World: Dominion, Disney’s Black Widow and The Eternals, Universal’s latest Fast & The Furious film F9, Top Gun: Maverick, Venom: Let there be Carnage, A Quiet Place 2 and Dune.

However, the situation hasn’t been helped by the perceived underperformance of Christopher Nolan’s Tenet. It is the first Hollywood blockbuster to be released since March and has been viewed as a litmus test by the industry, but has underperformed in the key US market on its way to a global take of more than $300m.

Richards argues that in reality Tenet has proved that audiences are ready to return. “Tenet right now has delivered over $300m worldwide and the overwhelming majority of that has been from international (non-US) markets. In the UK it will deliver 80% to 90% of the box office of Nolan’s last film Interstellar, despite everything. I think that audiences are warmed up again, they are comfortable going back to the cinema with the measures in place, that is why it is unfortunate that a film like Bond had to move.”

Last weekend the UK box office enjoyed its best performance since theatres re-opened in July, with the top 10 films taking just over £2m despite a dearth of new fare, although that is about a tenth of a typical weekend last year. Beyond the big players, Richards says if the government, landlords and movie studios don’t come together to support cinema owners, it is the future of the hundreds of small independent and regional cinemas he fears will be forced to shut for good. The main national chains, including the big three and the Everyman and Curzon brands, account for about 300 of the 840 cinema sites across the UK.

But while some smaller players have already closed, it is not all doom and gloom. “It is tough but with smaller players a lot of us have had to be quite creative anyway because we don’t have that scale,” says Preston Benson, founder of Really Local Group, which has opened its first cinema in Catford Mews in south London.

“For me, being totally reliant on Hollywood as my single source of driver for footfall, that is a risky proposition. There are a lot of really good independent films out there right now – Rocks, an east London coming of age story we have been doing selling out shows on – is a perfect film for Catford Mews. There is a long list of independent movies we are going to be showing over the next three months that we think we are going to have a good run with. We are feeling optimistic.”

However, with cinemas closed or struggling Hollywood studios have taken the opportunity presented by the pandemic to test bypassing the big screen and pushing films straight to fans at home. Richards is emphatic that these limited tests, the two most notable being Disney’s Mulan which moved to streaming service Disney+ and Universal’s Trolls World Tour, do not mark the start of a major threat to the long term viability of cinema.

“Unequivocally 100% no,” he says. “Movies are being delayed, time-shifted, not moved [to digital release]. Pre-Covid this was not a business that was struggling, it was breaking records. The cinema exhibition business is a sound industry. There is no issue here about the survival of the industry. There is just an issue in terms of who is going to survive.”