Aaron Sorkin’s Netflix film dramatizes the notorious 1969 political trial with many players. Use this guide to understand the people and the issues at stake. 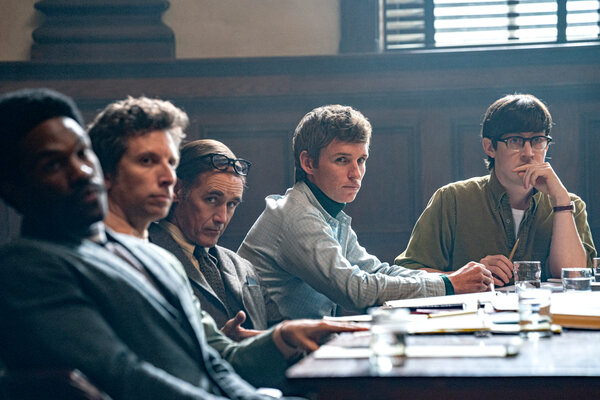 Scores of protesters in streets across the country. A looming presidential election. Violent stand-offs between law enforcement and the citizens they had sworn to protect. And, amid the prospects of political and cultural change, a chilling and inescapable backdrop: thousands upon thousands of Americans dead.

The summer of 2020 was, by any stretch, a historic one. But for some it’s a season that feels remarkably like the summer of 1968.

Instead of President Trump, it was Lyndon B. Johnson, succeeded by Richard M. Nixon. The tragedy that cost American lives was not a pandemic but the war in Vietnam. Racism was central to the protests — the Rev. Dr. Martin Luther King Jr. had been assassinated just months earlier — but so were a relentless draft and demands for peace.

In late August, tensions culminated in Chicago, in the shadow of the Democratic National Convention. The National Guard, U.S. Army troops and 12,000 Chicago police officers were mobilized against 10,000 demonstrators. (Who, yes, were called “outside agitators” then, too.) “Everything since Chicago,” the New York Times journalist Tom Wicker wrote one year later, “has had a new intensity — that of polarization, of confrontation, of antagonism and fear.”

Seven organizers — give or take — emerged as leaders whom the federal justice system could indict. Their contentious slog through the courts is dramatized in Aaron Sorkin’s “The Trial of the Chicago 7,” which began streaming Friday on Netflix. Sorkin, who wrote and directed the film, stayed relatively close to the facts of the case — tongue-twisting Sorkinese aside — and pulled some of the dialogue straight from courtroom transcripts. But for everything that doesn’t fit in two hours on screen, here’s what to know about the case and its defendants.

Who were the Chicago 7?

Demonstrators at the convention were not a monolith, but a collection of several factions: among them, the Youth International Party, or Yippies; Students for a Democratic Society; and the National Mobilization Committee to End the War in Vietnam. All were focused, at least in part, on pacifism and ending the war.

The Chicago 7 were prominent faces in the various groups. Abbie Hoffman and Jerry Rubin (in the film, Sacha Baron Cohen and Jeremy Strong) were founders of the Yippies — a party which, like its leaders, had a flair for the theatrical. At one point in the trial, Hoffman and Rubin showed up sporting judicial robes matching those of the judge, Julius Hoffman (Frank Langella). The two Hoffmans were not related, which did not stop the defendant from calling the judge his “illegitimate father” in court.

David Dellinger (John Carroll Lynch) led the National Mobilization Committee and was two decades older than Hoffman, the next eldest defendant. At the trial, The Times wrote in Dellinger’s obituary in 2004, he “loomed over his co-defendants in age, experience, heft and gravitas.”

Tom Hayden (Eddie Redmayne) and Rennie Davis (Alex Sharp) were in charge of the National Mobilization Committee’s Chicago office, and both were former leaders of the Students for a Democratic Society. Hayden was an established organizer of student protests, including the occupation of campus buildings at Columbia University. Davis, the only defendant other than Hoffman to testify, offered a powerful account in court of his experience in Grant Park during the week of the convention, when multiple officers beat him to the point of losing consciousness.

Lee Weiner (Noah Robbins) and John Froines (Danny Flaherty) were both academics: Froines was a chemistry professor at the University of Oregon, Weiner a research assistant in the sociology department at Northwestern University. They were involved in the National Mobilization Committee, but unlike the others, neither was a leader of any group. And also unlike the others: Both were cleared of all charges against them at the end of the trial.

How did the Chicago 8 become 7?

Bobby Seale (Yahya Abdul-Mateen II), a founder of the Black Panther Party, was the final — and most puzzling — defendant. He had never met some of the seven before the trial, even though all eight had been accused of conspiring with each other to incite a riot.

Seale and Judge Hoffman were continuously at odds during the trial. Seale’s lawyer, Charles Garry, was stuck in California for health reasons and unable to travel. Seale repeatedly asked to represent himself and was repeatedly refused by the judge (whom he subsequently called a “pig,” “fascist” and “racist”).

After weeks of bickering, Judge Hoffman ordered federal marshals to bind and gag Seale during his appearances, a visual that stunned the country. He eventually declared a mistrial in Seale’s case, leaving seven defendants — and sentenced Seale to four years in prison for 16 counts of contempt.

How did the trial unfold?

Sorkin didn’t have to do much to spice up the story. The trial, which began in the fall of 1969 and lasted nearly five months, was defined by dramatics on all sides. The defendants — and their lawyers, William Kunstler (Mark Rylance) and Leonard Weinglass (Ben Shenkman) — openly defied Judge Hoffman in his courtroom. (Collectively, the lawyers and their clients were convicted of more than 150 counts of contempt.) Squabbles over procedure were constant, and the judge himself, according to the Federal Judicial Center, made few attempts to disguise his bias against the defense.

None of this helped the defendants, who were facing unprecedented charges: They were the first to be prosecuted under the Anti-Riot Act, a provision of the Civil Rights Act of 1968. They stood accused of conspiring to incite a riot, and six (Seale included) were charged with crossing state lines with the intent of inciting a riot. The final two, Weiner and Froines, were instead accused — and later cleared — of teaching others how to make explosives.

The defense’s stance was that the case was more of a political trial than a criminal one. Still, five defendants — Hoffman, Rubin, Dellinger, Hayden and Davis — though acquitted of conspiracy, were found guilty of the riot charge relating to interstate travel. Judge Hoffman imposed the maximum sentence of five years each — a ruling that became irrelevant in 1972, when an appeals court unanimously overturned the riot convictions.

In the years after the trial, most of the defendants continued on paths of activism: Hayden won a seat in the California Legislature, Hoffman gave lectures and wrote several books, and Weiner joined the Anti-Defamation League as a political consultant. Kunstler became known for defending leftist causes and unpopular clients.

But for most, the convention protests remained the most memorable part of their legacy. The demonstrators they led, and the law enforcement they clashed with, Wicker wrote, “tore the rubber masks of affluence and power and security off American society and gave the nation a new view of itself — challenged and unsure, contorted and afraid, in contention for its own soul.”