What's New on DVD in January: 'The Swimmer,' 'Martin Eden,' 'Welcome to Chechnya,' and More

Cold weather and/or the pandemic have you staying in? Alonso Duralde’s monthly column spotlights the best new releases on DVD and Blu-ray 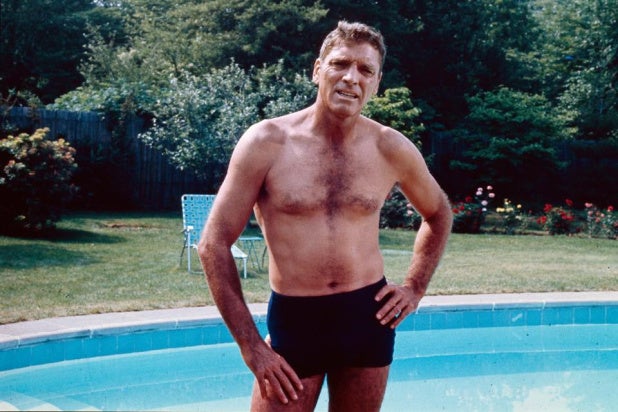 Slated to open in theaters right when the pandemic lockdowns started, and subsequently lost in the 2020 shuffle, Cannes award-winner “The Climb” (Sony Pictures Home Entertainment) is a smart comedy you might have missed. Co-writers Michael Angelo Covino (who also directed) and Kyle Marvin star as lifelong friends Mike and Kyle who may, as it turns out, be dragging each other down. A playful and occasionally ouch-y spin on the buddy comedy, this film may well be a calling card for two up-and-coming comic talents.

Also available: Mel Gibson makes a very non-traditional Santa Claus in the dark holiday comedy “Fatman” (Saban/Paramount), but Walton Goggins steals the show as the hitman hired to dispatch St. Nick; Adam Brody stars as “The Kid Detective” (Sony Pictures Home Entertainment), whose boozy grown-up existence doesn’t quite reflect his youthful potential; “Synchronic” (Well Go USA Entertainment) stars Anthony Mackie and Jamie Dornan in a trippy (in more ways than one) sci-fi thriller; an indigenous teenager sets out to find her estranged mother in the acclaimed “Once Upon a River” (Film Movement).

Acclaimed by critics aroud the globe, “Martin Eden” (Kino Lorber) adapts the Jack London novel about the political awakening of a young worker. Luca Marinelli won Best Actor at Venice for his performance in the title role, and the film even popped up on Barack Obama’s list of the best films of 2020. Blu-ray bonuses include a Lincoln Center Q&A and commentary from film scholar Dr. Giovanna De Luca.

Also available: Burmese immigrants in Thailand face challenges and hardships in “The Road to Mandalay” (Film Movement); “Open Up to Me” (Corinth Films) follows a Finnish trans woman as she starts a new life — and pursues a potential new love — following gender confirmation surgery.

One of 2020’s best — and certainly most harrowing — documentaries was David France’s “Welcome to Chechnya” (Music Box Films Home Entertainment), in which the Oscar-nominated filmmaker (“How to Survive a Plague”) closely follows LGBTQ+ people escaping harassment and murder in Chechnya in the hopes of making it to Europe. It’s a blistering portrait of discrimination and bigotry combined with the white-knuckle suspense of getting through borders and airport checkpoints.

Also available: “Minding the Gap” (The Criterion Collection) is a moving and powerful exploration of growing up and growing apart, as seen through the friendship of three skateboarders over the course of several years; narrated by Olivia Colman, the acclaimed “Nasrin” (Virgil/Kino Lorber) is a portrait of Iranian human-rights activist and political prisoner Nasrin Sotoudeh; the infamous guitarist from W.A.S.P. documents his rise, fall, and resurgence in Antoine de Montremy’s “Mean Man: The Story of Chris Holmes” (Cleopatra); Icarus Films Home Video reissues the hypnotic “Minute Bodies: The Intimate World of F. Percy Smith,” blending Smith’s underwater footage from the early 20th century with the music of Tindersticks.

Journalists fight back against the Philipines’ oppressive regime in “A Thousand Cuts” (PBS); “The Changin’ Times of Ike White” (Kino Lorber) recounts the stranger-than-fiction saga of one of soul music’s most elusive figures; a pioneering female artist returns to the studio in “Queen of Hearts: Audrey Flack” (Film Movement), from Oscar-winner Deborah Shaffer; in “Born to Be” (Kino Lorber), viewers are taken inside America’s first hospital center devoted to transgender medical care.

“The Craft: Legacy” (Sony Pictures Home Entertainment) proves that sequels (or rebootquels or legacyquels) can be worthwhile in the hands of creative filmmakers. Writer-director Zoe Lister-Jones (“Band Aid,” the upcoming “How It Ends”) clearly loves and reveres the original cult classic without needing the feel to repeat the beats, and the results are clever and surprising. This film and the “Black Christmas” remake indicate that Blumhouse is moving in the right direction when it comes to hiring women filmmakers; now the company just needs to do a better job promoting and platforming the finished product.

Also available: The holidays may be over, but you don’t have to put away those “Toys of Terror” (Warner Bros. Home Entertainment) just yet; 4K restorations of two sleaze-tastic 1960s Mexican features, “Batwoman” and “The Panther Women” (VCI Entertainment) share double billing on a new Blu-ray release; Ryan Guzman and Kyle Gallner play hoaxters who find themselves involved in a real exorcism in “The Cleansing Hour” (Shudder/RLJE); a gamer follows an Easter egg into an intergalactic prison in the action saga “Max Cloud” (Well Go USA Entertainment), starring Scott Adkins and featuring John Hannah, Tommy Flanagan, and Lashana Lynch.

One of the most compellingly strange films to emerge from 1960s Hollywood was “The Swimmer” (Grindhouse Releasing), Frank and Eleanor Perry’s adaptation of the John Cheever story. Burt Lancaster stars as a suburbanite who decides to “swim” home across his neighbors’ pools, but over the course of the day, his well-crafted illusions about his life begin to evaporate. It’s an unsettling portrait of post-war American anomie; Burt Lancaster gives one of his greatest performances in a film that still possesses the power to shock. (The actor’s heroic demeanor has never been put to better, or more devastating, use.) Released a year before “Easy Rider” would change the American film landscape, it’s a movie that hints at the New Hollywood upheaval to come in the following decade. (And this beautiful new Deluxe Edition includes an additional CD with Marvin Hamlisch’s memorable score.)

Also available: Richard Kelly’s “Southland Tales” (Arrow Video) was dismissed upon its original release but has since been reconsidered as a prescient look at American politics — make up your own mind with this new Blu-ray, which features the film’s 145-minute theatrical version as well as the 160-minute cut that premiered at Cannes; pour yourself the brew that is true from the vessel with the pestle, and enjoy Danny Kaye as “The Court Jester” (Paramount Presents); Abderrahmane Sissako’s 2006 festival hit “Bamako” (Icarus Films Home Video) returns to DVD, remastered in HD.

The Criterion Collection’s Three Films by Luis Buñuel features a trio of masterpieces (“The Discreet Charm of the Bourgeoisie,” “The Phantom of Liberty,” “That Obscure Object of Desire”) from the legendary Spanish auteur; controversial 1930s exploitation documentary “Ingagi” (Something Weird/Kino Classics) makes its Blu-ray debut in a new 4K restoration; Park Chan-wook’s “JSA: Joint Security Area” (Arrow Video) follows an international team investigating a shooting at the border between North and South Korea; one of the best-kept cinema secrets of recent years is that the great Alan Rudolph (“Choose Me,” “The Moderns”) made a movie in 2017 — check it out, alongside one of his Oscar-nominated arthouse hits, on the new “Afterglow” / “Ray Meets Helen” (Moonstone Entertainment) double-feature disc.

The international cult anime series gets served up in a handsome box set with “Bartender”: 15th Anniversary Collector’s Edition (Shout Factory), a two-disc set (complete with coasters and drink recipes) that includes all 11 episodes. In this adaptation of Araki Joh and Kenji Nagatomo’s popular manga series, Eden Hall is a quiet bar, but it’s run by a skilled mixologist who gives his clientele the advice they need to hear, just when they need it the most. It’s an ideal binge-watch when you’re staying cozy with an adult beverage.

Also available: The legendary Glenda Jackson plays a grandmother with dementia who must nonetheless solve the mystery of her friend’s disappearance in “Elizabeth Is Missing” (PBS); humanity is doomed, but nothing stops the train in “Snowpiercer”: The Complete First Season (Warner Bros. Home Entertainment); “Doom Patrol: The Complete Second Season” (Warner Bros. Home Entertainment) continues to explore the lives and adventures of some of DC Comics’ strangest heroes.

A serial-killer case hits a little too close to home for a Finnish investigator in the import “Bordertown”: Season 1 (Kino Lorber); “Spongebob Squarepants”: The Complete Twelfth Season (Nickelodeon/Paramount) sees the beloved animated icon still living in that pineapple under the sea; the new series “Scooby-Doo! And Guess Who?”: The Complete First Season (Warner Bros. Home Entertainment) plays around with the old guest-celebrity trope from the 1970s “The New Scooby-Doo Movies,” only they keep the guest’s identity a secret; Jordan Peele is Serling up the joint again with “The Twilight Zone”: Season Two (CBS/Paramount).