In 1962, the Japanese film studio Toho released “King Kong vs. Godzilla,” an ambitious monster movie that pitted two of the most popular creatures in cinema history against each other in (supposedly) mortal combat. The movie boasted a drunken Kong; cringe-worthy brownface (with Japanese actors darkening their faces to play South Pacific “natives”); and a battle with a giant octopus — played by real octopuses.

The feature became the best attended Godzilla movie in Japan even today, reviving the franchise and setting the stage for scores of monster movies to come.

“In the late 1950s, Toho was creating all these new monsters — Mothra, Rodan — for each new film,” said William M. Tsutsui, author of “Godzilla on My Mind: Fifty Years of the King of Monsters.” “But it really was ‘King Kong vs. Godzilla’ that cemented Godzilla as the star of Toho’s monster franchise.”

Since then, the two titans have fought giant squids and oversized arachnids and all manner of mechanized beasties — but never each other. Here are two enormously popular movie stars from two countries and film industries obsessed with franchises and sequels and “versus” movies. Why did it take six decades for a rematch? That’s the question raised this month when the two finally meet up again in “Godzilla vs. Kong,” a big-budget, effects-laden feature from Warner Bros. and Legendary.

In this latest outing, Godzilla emerges from hiatus and mysteriously runs amok, leading to battles royale with Kong under the sea, aboard Navy ships and in the neon-lit streets of Hong Kong. 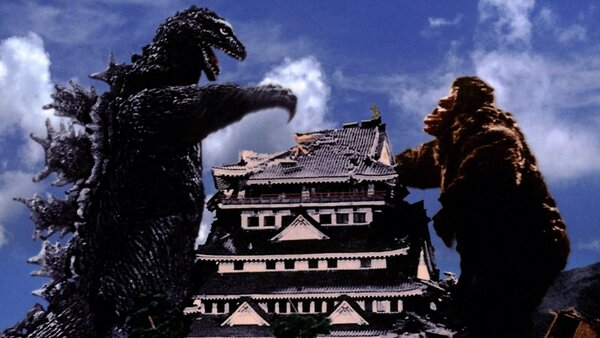 A lot has changed since 1962. Japanese actors in latex “creature suits” have been replaced by hyperrealistic C.G.I. effects; the creatures are even more enormous (since his film debut, Kong has grown from around 24 feet in 1933 to more than 300 feet today); and the fights are staged on the grandest of scales. And unlike in the first film, when Kong may or may not have been the winner — only he rises from their underwater clash, but seeing as how Godzilla is aquatic, who really knows? — this latest film promises a clear and decisive champ.

That point was crucial for the director Adam Wingard, who recalls schoolyard arguments over who would win such a showdown. “There was always the feeling that they didn’t quite get that right, that somebody had to say, look, this is who would win,” he said in a video interview. “I’m not usually a petty person, but maybe this is my way of winning the longest long-term argument in history.”

The path to “Godzilla vs. Kong” is filled with twists and turns and near-misses. When Godzilla first stomped into Japanese theaters in 1954, the monster was a hit. But a sequel the following year underperformed, and soon, other Toho creatures like Mothra and Rodan were stealing his thunder at the box office. In fact, the 1962 film was originally envisioned by Willis O’Brien, who animated the 1933 stop-motion Kong, as a matchup between the ape and Frankenstein’s monster, but concerns over rights to the Frankenstein character scuttled those plans. Toho stepped in and offered its celebrated reptile as a replacement partner, timed to the studio’s 30th anniversary.

In the first meeting, the two stars don’t start fighting each other until nearly an hour in — and even that is a halfhearted affair, with a lot of bellowing and chest beating but not a lot of brawling. “The fight scenes are intended to be humorous,” Tsutsui said. “This was when Godzilla’s makers were trying to copy pro wrestling, so they’re supposed to be funny and stagy, and didn’t have the gravitas of the Japanese movies from the ’50s, or what we’ve seen more recently from Legendary.”

The film’s ambiguous ending, with Kong rising out of the ocean, led to a popular fan theory that an alternate ending was created for Japanese audiences, with Godzilla as the winner. “If you’re selling this as Japan vs. the United States, you don’t want either side looking bad,” Tsutsui said. “But more importantly, I think they were thinking remake, ‘King Kong vs. Godzilla II,’ somewhere down the line.”

Indeed, the film’s box office success in Japan and the United States prompted several attempts at a cinematic rematch. Plans for a 1963 sequel fizzled. (In one incarnation, the two beasts work together to save a baby from a raging lava flow.) Later attempts to secure rights to RKO’s version of Kong were rebuffed, leading Toho to a 1967 coproduction with the animation studio Rankin/Bass titled “King Kong Escapes,” which featured struggles with Mechani-Kong, a robot doppelgänger, and a giant dinosaur. In the early ’90s, Toho considered a remake of the 1962 film as well as a feature pitting Godzilla against Mechani-Kong, but both went nowhere. Still, even without Kong, Godzilla thrived, becoming Toho’s most popular monster and one of the world’s longest running film franchises.

Plans for “Godzilla vs. Kong” were announced in 2015 as part of Legendary’s MonsterVerse, the multimedia franchise begun the year before with the director Gareth Edwards’s “Godzilla.” After solo outings in 2017 in “Kong: Skull Island” and “Godzilla: King of the Monsters,” the pair’s meeting was hyped as a “spectacular battle for the ages” by Legendary and Warner Bros.

Unlike the 1962 original, there’s no waiting around for the monsters to show. A third of the way in, we’ve already seen Kong use sign language, shower and scratch himself; Godzilla lay waste to a swath of Pensacola, Fla.; and the two wage a slugfest at sea, with Godzilla’s tail slicing through ships and Kong, no great shakes as a swimmer, struggling mightily out of his element. “I saw Kong in the action scenes as this sort of John McClane, ’80s action archetype, where it’s one guy with his back against the wall, and you keep throwing more and more things at him,” Wingard said.

There’s a lot to throw, from parts of buildings and fighter jets to an ax fashioned from the spike from the back of one of Godzilla’s distant ancestors. There’s even an Easter egg homage to a scene in the 1962 original, in which Kong jams a tree trunk down Godzilla’s gullet.

But the action doesn’t get too bloody, other than maybe one scene in which Kong tears the head off a flying reptile and chugs the green brains from the animal’s decapitated skull. “You never want to go to a place where you’re being grisly just to be grisly,” said Alex Garcia, who has served as a producer on all four of the MonsterVerse films. “But Godzilla’s an animal. He’s gotta eat.”

In the end, the filmmakers had to contend with expectations built up over a six-decade-long wait. Just in the past few months, impatient fans have come up with numerous theories about the showdown based on leaked news and snippets from the film’s own trailers — including one particularly imaginative conjecture, in which the inexplicably rampaging Godzilla is actually Mechagodzilla, the lizard’s evil mechanical rival, wearing Godzilla’s skin. “Yeah, I saw that one,” Garcia said, laughing. “It actually got a lot of traction. And that’s why I love the Godzilla fans so much. I love that people would go there with it.”