On Monday, Radiohead officially (and begrudgingly) released Minidiscs [Hacked], a 17-hour deep dive into the OK Computer birthing process courtesy of Thom Yorke’s own minidiscs. As the title suggests, the Bandcamp file dump came nearly a week after the 18 disc-length mp3s leaked onto the internet.

While the origin story of the leak is still unclear – the band themselves mention that the files were “reportedly” ransomed for $150,000 by a hacker – the edited-down minidiscs served as a foundation for the cassette included in the deluxe edition of the OKNOTOK 1997 2017 reissue.

That 80-minute cassette – the contents of which feature throughout Minidiscs [Hacked] – included sound collages, rough sketches, unheard songs, rehearsals and aural experimentation that offered an opaque window into the making of the landmark LP. With Minidiscs [Hacked], that window has been smashed open and now the house is being looted. 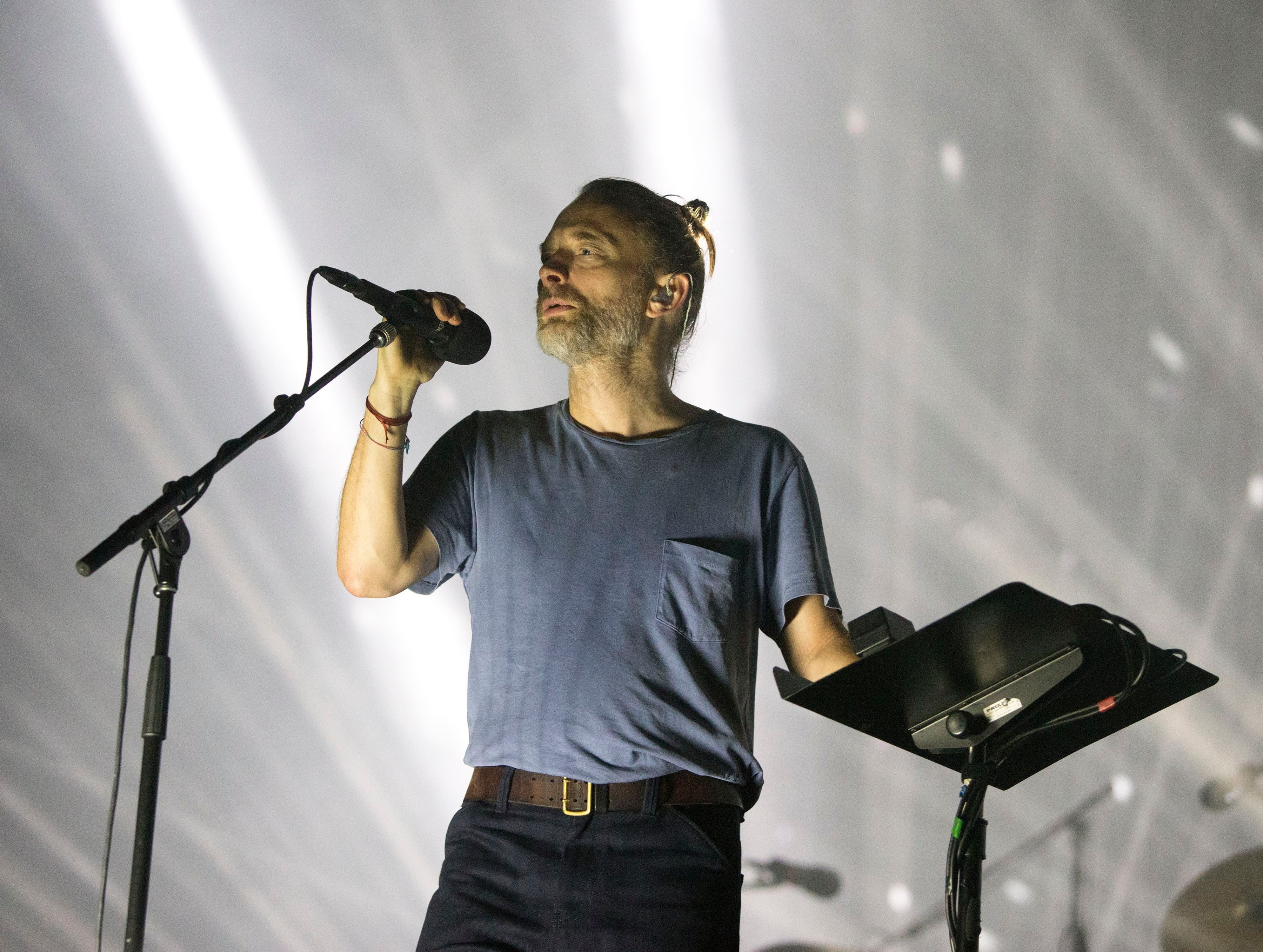 As 17 hours of music is a lot for even Radiohead diehards to endure – “I Promise,” a thoroughly okay song, appears 14 times here – we wilted down Minidiscs [Hacked] to the 30 must-hear minutes that even casual fans should endeavor to explore.

Note: This summary matches timestamp-wise with the unofficial leaks and not the Radiohead release, which edited down the 18-disc dump and removed non-Radiohead material (like the 15 minutes of James Bond score that appeared on Minidisc 6) and exceedingly superfluous stuff (like the 12-minute field recording buried within Minidisc 13, which was edited down from 51 minutes to 18 minutes in its official release). Material that appeared on the OKNOTOK cassette is also excluded.)

For decades, the unreleased “Lift” – showcased live in post-The Bends concerts but never placed on a studio album or B-side – was Radiohead fans’ great white whale, a perfect synthesis of The Bends‘ Britpop brilliance and the looming OK Computer‘s arthouse aspirations, weaponized with the band’s best hook since “Creep.” When “Lift” finally did arrive as a bonus track on OK Computer‘s 20th anniversary reissue, the version – restrained, decelerated and boasting an uncharacteristically blasé Yorke vocal take – failed to capture the magnitude of those live renditions.

Now, consider the magnitude captured: Three of-the-era “Lift” studio recordings are the crown jewel of the minidiscs, the best of which appears 10 minutes into Minidisc 125, a striking rendition complete with the Casio intro, soaring guitars lockstep with strings-mimicking synths and Yorke’s impassioned vocals. The “Lift” featured here are well worth the $23 for-charity Bandcamp asking price, or the alleged $150,000 ransom.

Outside of the must-hear at-work versions of previously released Radiohead songs, the most exciting part of the leaks is the dozens of solo demoes Yorke recorded into his minidisc player, the majority of which have never resurfaced in either Radiohead’s or Yorke’s own catalog.

Radiohead have always been strict gatekeepers and shrewd curators of their own music, so it’s fascinating, jarring and almost myth-shattering to hear Yorke this unguarded and, well, imperfect. In a way, the minidiscs’ bedroom recordings carry the same raw voyeuristic experience as the Montage of Heck soundtrack recordings, which similarly captured Kurt Cobain in a not-for-public-consumption mood.

As such, most of the solo recordings here are inessential – there’s probably a reason the majority of these tracks weren’t revisited – with Yorke often laying down ideas or riffs with placeholder lyrics, songs in their most embryonic form. However, there are a handful of readymade demoes that could slide easily into a Radiohead playlist, chief among them Minidisc 127’s fan-titled closer “Tomorrow Night in Paris,” a polished, piano ballad in the vein of Radiohead’s “The Daily Mail” and “Last Flowers,” the latter of which also appears here.

Of all the radical reworkings hidden among the 18 minidiscs – An acoustic “Palo Alto”! A near-perfect instrumental version of the perpetually-worked-on “True Love Waits”! An entire history of “Exit Music”! – among the best transformations is the multiple appearances of “Last Flowers,” the OK Computer-era track that wouldn’t be released in finished form until it made the bonus disc of the In Rainbows deluxe edition.

That In Rainbows rendition boiled the song down to just Yorke and a piano. The minidiscs reveal the track’s Technicolor potential as the band underlays the rendition with a funky bassline, lots of fuzz, Yorke busting out the original song title mid-guitar solo (“Last flowers until hospital”) and a guitar melody that, perhaps too closely, resembles the Bond theme “You Only Live Twice.”

The aforementioned “True Love Waits” – another standout of the minidiscs, as they capture with soundboard clarity the song’s original live form – was initially released officially as an acoustic ballad on the I Might Be Wrong EP before the band morphed it into A Moon Shaped Pool‘s haunting closer. Hopefully, a similar fate that realizes its full potency is destined for “Last Flowers.”

The song “Attention” appeared, for the first time ever, as a Yorke 4-track recording on the OKNOTOK cassette. Minidiscs [Hacked] reveals just how much attention the band was actually giving to the track: While no final studio takes leaked, the song appears 10 times on the minidiscs, from acoustic snippets to band rehearsals. The best of the bunch is the “Attention” that appears on the first minidisc, a full band run-through recorded during a Portland soundcheck that teases the potential of the ultimately never-revisited song.

Minidiscs [Hacked] often takes on the guise of one of those massive completist reissues – think Bob Dylan’s The Bootleg Series Vol. 12: The Cutting Edge 1965–1966 or the Beach Boys’ The Smile Sessions – that, almost extraneously, catalog every take of a song and tracks its migration from conception to completion. Here, instead of repetitive studio takes, Radiohead workshop the perspective OK Computer songs in a series of minidisc-filling rehearsals.

Minidisc 119’s “Let Down” is the most interesting of all rehearsals. Clocking in at 11 minutes – the leak’s longest non-field recording track – the rehearsal is like listening to Radiohead giving birth to what eventually would become a fan favorite. The foundation firmly of the song in place, the band operates like a jazz quintet, with each member pushing “Let Down” toward its final destination. Some of the experimentation makes the final cut, some of it (rightly) was abandoned, but the “Let Down” rehearsal is an intimate and rare look at Radiohead at work and creating together.

One-third of the minidiscs are soundboard-quality concert and soundcheck recordings from 1996 that Yorke taped while Radiohead roadtested the eventual OK Computer material. Taped throughout a tour of the Eastern U.S., Minidisc 124 boasts five stripped-down soundcheck versions of “Airbag,” each completely shorn to give them an almost Bends-like quality before producer Nigel Godrich added his sheen to the final OK Computer version.