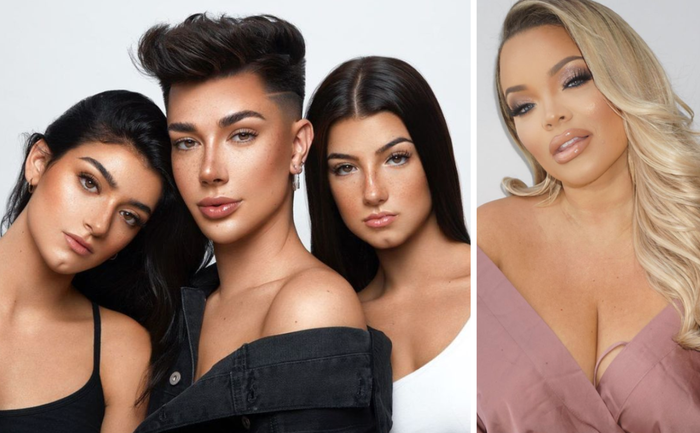 A massive feud between popular TikTokers captured the internet's attention this week as accusations of teen stars being "entitled" and "ungrateful" turned into allegations of predatory behavior.

At the center of the feud is 16-year-old Charli D'Amelio, the most-followed person on TikTok. Before the drama, D'Amelio had more than 99 million TikTok followers. She lost over 1 million after people started calling her "rude" and "entitled" — but after her fans and fellow creators defended her and she apologized, D'Amelio started gaining followers back again.

D'Amelio's older sister Dixie, who is 19, was also criticized during the drama. Both the D'Amelio siblings were defended by 21-year-old beauty YouTuber James Charles, who became friends with the D'Amelio family early on in their TikTok fame. Charles has nearly 24 million YouTube subscribers and nearly 30 million TikTok followers.

32-year-old YouTuber Trisha Paytas, who has 3.8 million TikTok followers, was one of the loudest voices criticizing the D'Amelio siblings. But the tables turned on Paytas after Charles called out her own controversial history.

Here's how all the drama played out.

On November 16, the D'Amelio family YouTube channel posted a video with James Charles that would soon turn controversial.

While Charli and Dixie D'Amelio rose to fame on TikTok, the two sisters and their parents have also started successful YouTube channels. On their vlog channel The D'Amelio Family, the four of them started a new segment called "Dinner With The D'Amelios."

In the first and so far only episode of "Dinner With The D'Amelios," Charles was the surprise guest. While most of the interview segment during the video was uneventful, a few unflattering moments presented Dixie and Charli in a bad light.

Celebrity chef Aaron May, who often appears on the Food Network, served the D'Amelio family a traditional Spanish paella with cooked snails. Dixie, who has struggled with medical issues arising from anxiety, is open about having a sensitive stomach and vomiting frequently. During the video, Dixie tried one of the snails and then ran outside to throw up.

Charli also asked if there were "dino nuggets" instead of the food May cooked, which led fans of the sisters to call them "rude" and "entitled" toward the chef (May told paparazzi that he wasn't offended and that the snails were intended to trigger a reaction from Dixie).

Secondly, an exchange between Charli and Charles left fans saying the 16-year-old was "ungrateful" for her huge following. At the end of the YouTube video, Charli told Charles she was hoping to surpass 100 million TikTok followers within one year of hitting 1 million followers. Charles sarcastically asked, "Was the 95 [million] not enough for you?"

Charli responded that she wanted "even numbers," which left a bad taste in fans' mouths and led to a massive unfollowing. 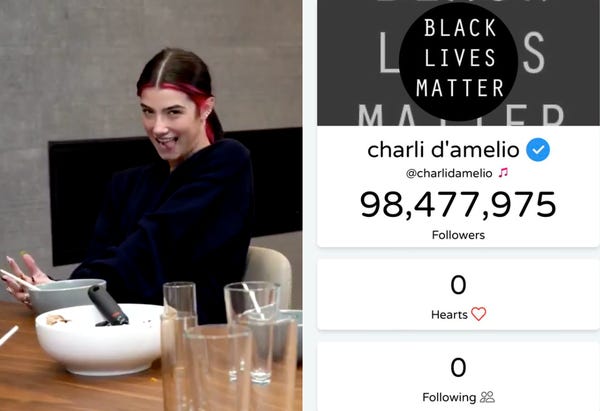 Two days after the YouTube video was posted, outrage over the D'Amelio sisters' behavior turned into action. Charli's followers started unfollowing en masse, and in a 24-hour period, she lost more than 750,000 followers.

Eventually, Charli lost more than 1 million followers altogether, dipping from 99.5 million to 98.4 million. But she soon rebounded and D'Amelio is now back up to 99.2 million at the time of publication.

"The fact that over 99 MILLION people took time out of their days to focus on her and follow her is annoying me at this point," one commenter said.

Trisha Paytas was one of the biggest voices on TikTok calling out the D'Amelio sisters for being "entitled." 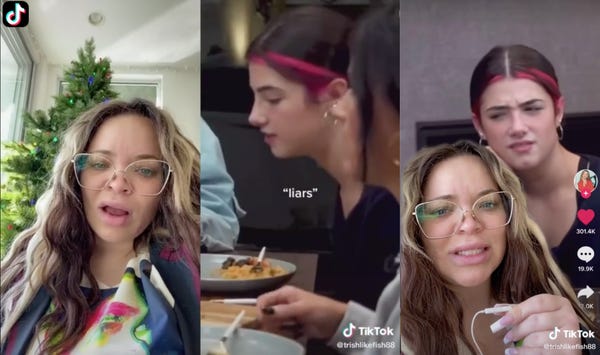 At the same time that Charli was losing followers, Paytas was rallying criticism on TikTok. She reacted to a compilation of clips from the YouTube vlog that showed the sisters acting "ungrateful."

Paytas also called out both Dixie and Charli for acting "unbecoming." She said Charli, as a minor, didn't deserve to get hate but said the two sisters needed constructive criticism that their parents and older friends like Charles weren't providing.

##greenscreen do u think influencers should be called out for unbecoming behavior ? Is it constructive criticism or hate ?

In an explanation video that wasn't well-received by their angry fans, Dixie explained that her team set her up to elicit a reaction because they knew she would throw up at just the smell of the snails.

Paytas respond to Dixie's explanation and said it wasn't a "sincere" apology. She continued on to say that the team made Dixie look "bratty" and restated her critique of the adults around the D'Amelio sisters.

In a tearful response, Charli asked Paytas to stop talking about her, while James Charles jumped in to defend her. 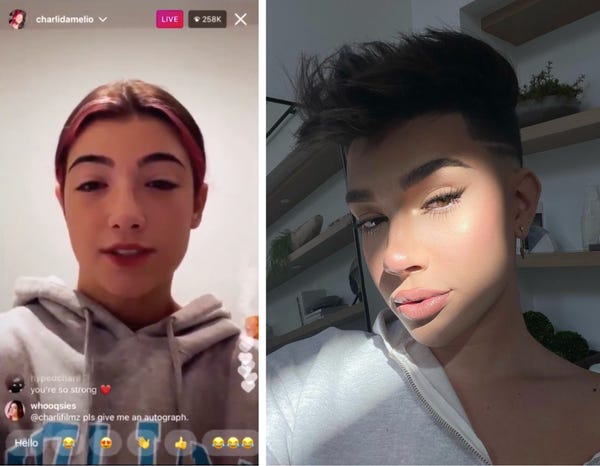 In her livestream about the video, Charli apologized and said the behavior was "a big misunderstanding" and "taken out of context." She said she wasn't treating her followers as a number, but rather that she had a "big surprise" planned for when she hit 100 million followers on TikTok.

Charli also addressed Paytas and asked her to stop talking about her. Charli said Paytas had been "rude" toward her on multiple occasions and had her "own problems" to worry about.

Paytas apologized for hurting Charli's feelings — although she later retracted her apology — but said that it was fair game for anyone to criticize "the most-followed person on social media."

At the same time, Charles chimed in on Twitter to defend D'Amelio.

He called out "30+ year olds dragging someone half their age," a call-out of Paytas and a reference back to Charles' own explosive 2019 drama with Paytas' close friend Shane Dawson and Paytas' former friend Jeffree Star. Dawson and Star, who are both in their 30s, both publicly criticized Charles at the time.

In response, Paytas pivoted and went after Charles, who clapped back in a TikTok. 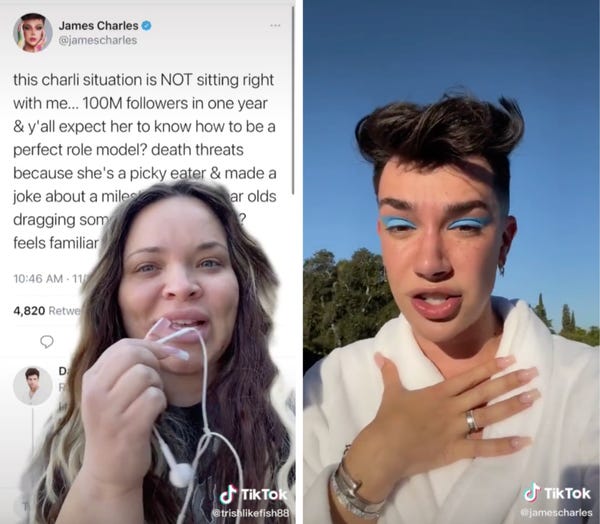 Paytas then directed her anger toward Charles, who she said was always "playing the victim" and was "creepy" and "predatory" toward Charli.

She also brought up Charles' 2019 scandal with Star and Dawson, saying that beauty YouTuber Tati Westbrook made him the "victim then" when Westbrook infamously accused Charles of disloyalty over him endorsing a competing vitamin brand to hers.

Paytas said "Charli is the victim" of Charles, who she said was "predatory." In response, Charles made a TikTok denying that his friendship with Charli was inappropriate and instead listed off some of Paytas' past controversies, which include her saying the N-word. 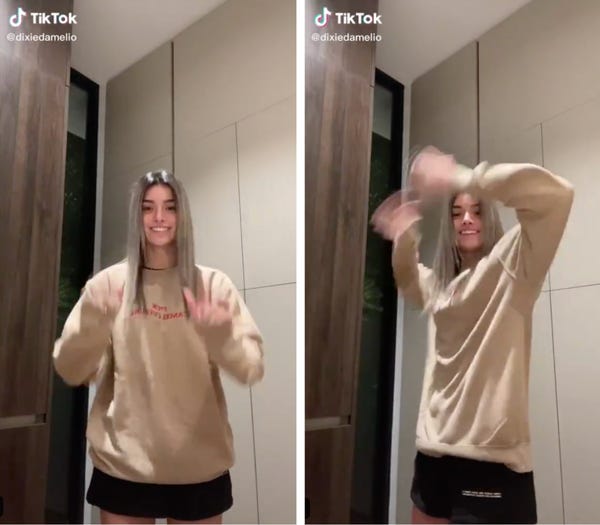 After Charles' call-out, TikTok creators started to resurface decade-old audio of Paytas singing and rapping along to the N-word in songs. Most notably, Dixie posted a TikTok dancing along to Paytas rapping the song "F— Tha Police" by NWA.

But Dixie's response was even more controversial, and several Black creators accused her of trivializing and weaponizing racism for a petty internet feud.

"As a black person, this… makes her just as bad because she consciously picked that audio because it had the N word… so… yeah," wrote one Black YouTube creator.

Dixie ended up deleting the TikTok and apologizing.

Other TikTokers weighed in on the feud, and Paytas criticized many of them for partying. 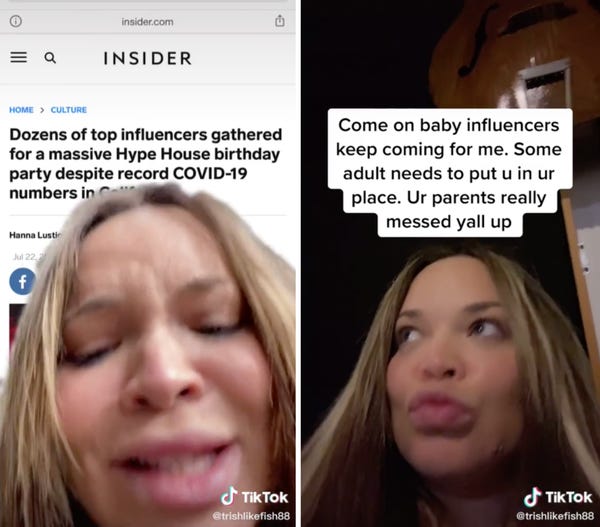 After she started gaining followers back, Charli stopped posting about the drama and she and Charles moved on with other content. Paytas kept up the commentary, though. She put out dozens of tweets and over 100 TikToks about the situation, which is ongoing, as she continues to respond to other creators and people attacking her.

Creators like Alyssa McKay mocked the fact that many TikTok fans appeared to "switch positions" and go from supporting Paytas to supporting Charles within one day.

Another popular TikTok creator, Larray, tweeted "good morning to everyone except trisha paytas" on November 20, and she responded by calling him out for attending parties during the COVID-19 pandemic.

Throughout everything, Paytas has maintained that she can't be canceled — and if her decade-plus career as a controversial influencer proves anything, it's that she's probably right.