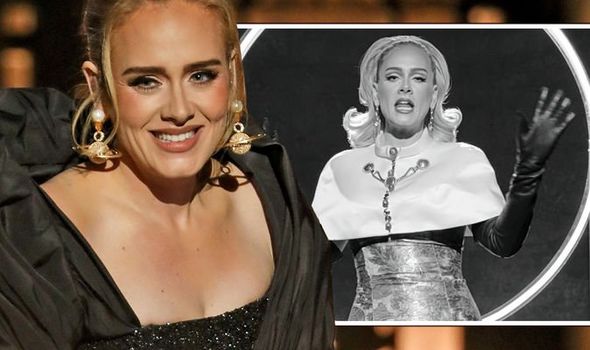 After some classic balladry on lead single Easy On Me, the London legend is back with a punchy upbeat classic that harks back to the likes of Rolling In The Deep, even using the same video director, Sam Brown. The star said: “To collaborate together again a decade later was nostalgic to say the least.” 11 years later, over staccato, shuffling beats, Adele also delivers a succession of signature slick looks, staying cool while dancers and acrobats dance and play around her. However, the reality wasn’t quite so calm and collected when the singer saw the huge snake on set.

Adele posted the behind-the-scenes shock on Twitter: “We filmed this one on the day Easy On Me dropped, there were a million things going on all at once. But the attention to detail from the crew was borderline hilarious – thank you so much for your patience and pulling it all together it was a lot of fun.

“Although right at the end a huge python was on set so I skidaddled (sic) my ar*e straight out of there!”

The superstar also name-checked the creators of her stunning wardrobe: “Big thank you to Harris Reed, Louis Vuitton and The Queens Haus – Vivienne Westwood for the most stunning clothes for me to sing my “I’m a hot mess” song in!”

The song’s refrain insists, “I want to have fun” and comes as the music icon is about to embark on a bold new adventure.

Adele’s debut residency kicks off at The Colosseum of Caesars Palace Hotel in Las Vegas on January 21. She will follow in the footsteps of some of the music industry’s greatest legends. Everyone from Elvis and Tom Jones to the Rat Pack’s Sammy Davis Jr, Dean Martin and Frank Sinatra has performed in the Nevada casino town.