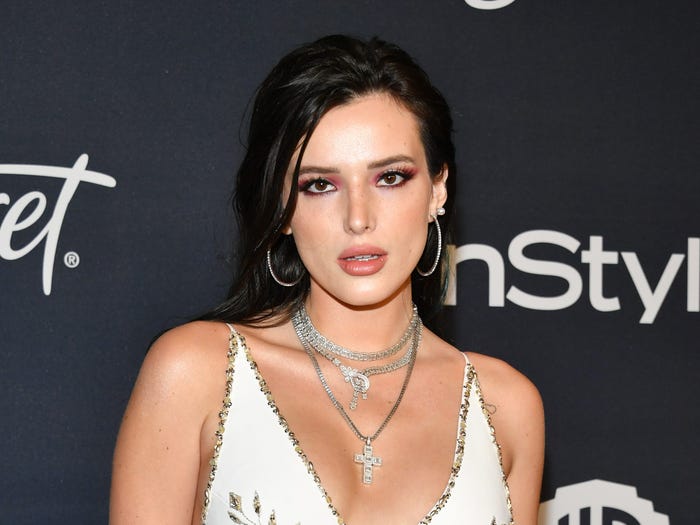 Bella Thorne is once again facing backlash tied to her OnlyFans presence after the former Disney Channel actress claimed on her Instagram story that she "took the hit" for joining the platform "first."

In her story, which was reported on in PageSix and documented in screenshots, Thorne appeared to say, "Everyone joining ONLY fans but I took the hit for doing it firsttttt coooool." She continued, "Legit everyone In my news feed following my footsteps but when I was getting heat y'all were scared."

One tweet containing the posts that appear to be from Thorne's story with the caption "bella thorne is one of the top 10 villains of 2020" has amassed over 172,000 likes.

Thorne's OnlyFans presence has drawn criticism essentially since its launch

This is far from the first time Thorne has faced backlash for her presence on the platform. She earned $2 million in her first week on the platform (and $1 million of that in a single day). However, the biggest controversy began with a $200 pay per view (PPV) post following social media reports that she falsely advertised it as a nude, despite the fact that she had previously tweeted that she wouldn't be "doing nudity."  One viral tweet alleged that the photo incited a significant number of people to request refunds.

On August 28, OnlyFans announced that it was changing its policies, limiting tips on content (there had previously been no limit) and limiting the price of exclusive content to $50. Sex workers, for whom the platform has been a lifeline during the pandemic, questioned whether or not the new limits were a result of Thorne's post. In a statement given to Insider at the time, OnlyFans denied that the policy change had anything to do with Thorne.

Some sex workers have accused Thorne of 'gentrifying' OnlyFans

As Insider's Canela López reported, one sex worker and OnlyFans creator said that they saw profits dip as OnlyFans became more mainstream and celebrities like Thorne joined the platform. Some called for Thorne to redistribute the record income she earned during her first week on OnlyFans to sex workers.

Thorne apologized to sex workers who accused her of "gentrifying" the platform, tweeting that she had wanted to help "remove the stigma" behind sex work by "bringing a mainstream face" to OnlyFans.

"I am a mainstream face and when you have a voice, a platform, you try to use you in helping others and advocate for something bigger than yourself. Again in this process I hurt you and for that I'm truly sorry," she tweeted, calling the new restrictions "f-cked up" and saying that she was meeting with OnlyFans to speak about them.

That's part of why Thorne's assertion that she "took the heat" for being the "first" to join OnlyFans incited such a response on Twitter, with many repeating allegations regarding her PPV content and the August OnlyFans policy changes.

Representatives for Thorne did not immediately respond to Insider's request for comment.