Boyzone star Keith Duffy has revealed he once turned down a role in hit HBO fantasy series Game of Thrones in order to go on tour with his Westlife pal Brian McFadden.

Keith and Brian formed their own supergroup – dubbed Boyzlife – back in 2016, and immediately embarked on a tour together.

The lads released their first single together last week after performing Boyzone and Westlife hits for five years, and are coming out with an album already in the works.

Their new single, The One, is a romantic ballad with notes of the iconic 80s and 90s era boybands that made their careers so iconic – and admit they've carved out a "sound" for themselves to distinguish them from their former band counterparts.

But for Keith, his acting career is just as important as his singing one.

The star is best known for playing Ciaran McCarthy in ITV soap Coronation Street – but he's also appeared in shows like Irish sitcom Mrs Brown's Boys and drama The Clinic.

Speaking exclusively to Daily Star about his career on the cobbles, Keith said: "Corrie was very good to me, because in the years of being in Boyzone, Stephen Gately – God rest him – and Ronan Keating were the two lead singers of all the songs.

"The other three members, myself and the other two lads, often tried to push ourselves to the front and get an opportunity to sing a lead vocal."

He went on to slam music mogul and former X Factor judge Louis Walsh, explaining: "Louis kind of pushed us back and suppressed us for years, and that kind of kills your confidence.

"It makes you have no belief in yourself and when I came out of Boyzone, that’s how I felt. I kind of felt like I was left in a desert to starve, and I didn’t know what to do." Keith explained: "The most important thing for me at the time was to keep my profile high so I could figure out what part of the entertainment business I wanted to be in.

"At the time Ronan and Stephen went out and had solo careers – so having a solo career and going in competition against my two mates, who I’d just been working with for the past seven or eight years, that didn’t appeal to me."

Keith acted in a short film and decided he'd love to try more – so auditioned for Coronation Street.

"The executive producer of Corrie at the time was of Irish descent, and he wanted an Irish character," he explained.

"He saw me in Big Brother and he liked my character, so he brought me to Manchester. Basically I auditioned for the part and didn’t get it – but he brought the audition tape to the annual writers' meeting, and they made a unanimous decision to make a character for me.

"So I got a three month contract, I think about six episodes, and then while I was shooting those six episodes they extended my contract by another three months.

"By the time I’d done that three months, they’d extended my contract to two years.

"Then I left to do a tour with Boyzone in 2013, so I was in Corrie on and off for 10 years. I came out to tour with the lads a few times, but I kept on going back in and it was very good to me. It gave me a good education."

And would he go back to the Coronation Street cobbles?

"I'd never say never. I love what I do at the moment but I would be wrong to say I'd never go back."

Keith explained he then moved briefly to Los Angeles to try and kickstart a Hollywood career, along with performing in plays over in Ireland.

"Acting is something that I love. I had great aspirations once upon a time about going to LA, I went over there twice and came home with my tail between my legs.

"I came very close to being on Boardwalk Empire and then I auditioned twice for Game Of Thrones and they offered me a part… but Brian and I were actually touring at that stage.

"Boyzlife had been created and we were very, very thick in the middle of touring, so I just turned it down," he confessed.

Brian couldn't help but quip: "I think you made the wrong choice, pal!"

Speaking of going from starring in a boyband to having a solo acting career, Keith explained: "It's terrifying. It’s much more difficult when you’ve been known to be in a band, to stand on stage and do a 12 page monologue to an audience that knows you as Keith from Boyzone.

"You have to convince them that you’re somebody else and make it believable, so that was a huge challenge – which I conquered, if it’s ok to say that!"

And now the boys are back on tour – though Boyzlife, Brian admits, only began as a short project.

He said: "It’s crazy how it’s grown. It’s funny to think back… the original idea for this was over a few pints of Guinness in Dublin, and Keith said about doing this show. 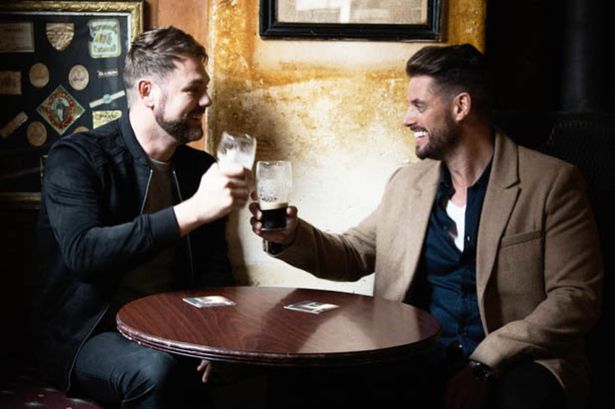 "Originally we weren’t planning on doing this for a long time – it was only supposed to be a one-off little run of shows.

"It was going to be one gig that we’d maybe do for four weeks and it’s crazy to think that we’ve gone from that to spending the last five years touring and actually doing full shows.

"We're now getting to a stage where it’s changed from us singing the Boyzone and Westlife songs to actually creating our own music."

And their first single captures the essence of the music they're going on to produce, as Brian explained: "I think the single is a very good example of what the record is. It's got a sound, it really has.

"We've written a lot of songs that have that 80s/90s feel, but the way we made the record is we wrote the songs before we produced them.

"Sometimes in the past you might write the song, produce it and then make another, and they can sound so different. So Keith and I wrote a lot of songs during lockdown when all the studios were closed.

"They were all acoustic tracks or some without music entirely – just melodies and lyrics we'd written down.

"So if you listen to any of the songs on the album, you'd know it was from this album."

He added: "I think this single is the launch of us actually becoming our own thing and not just singing our old stuff.

"This is us becoming an actual act – and we didn’t originally ever plan for that to happen. We didn’t set out for this to happen, it just organically grew."

Brian said it is the "proudest work" he's "ever been involved in" – including his own solo albums.

But on tour, Brian and Keith perform a collection of their Boyzone and Westlife hits – and their favourite tracks to perform differ.

Brian explained: "For me my favourite Boyzone track is You Needed Me, the version we do now with the orchestra."

While Keith offered: "On stage I like the uptempo numbers. I dance like nobody's watching, I just love the whole performance. When You're Looking Like That is the opening song and you really set the pace and energy with that song, so I try to make it as big as possible.

"This show, for me, just flows from start to finish."

Boyzlife ‘The One' is out now. Stream/Buy ‘The One’ Here – Pre-order the upcoming album here.