Breaking through with a glitter bomb

Smashing the patriarchy can be a tough gig particularly when your show title is censored.

Since 2017, Glittery Clittery, a cult feminist disco cabaret by Australian theatre group Fringe Wives Club, has toured the world and won awards at festivals in Edinburgh, Adelaide and Melbourne. Yet the name still triggers embarrassment.

Rowena Hutson, who devised and created the show with fellow Fringe Wives Laura Frew and Tessa Waters, says some newspapers ban the word “clittery” after interviews.

“Even though it’s a made-up word,” she says. “It’s referencing a scientific anatomical name but they couldn’t print it. We’ve been in the same city as Puppetry of the Penis and they had headlines and advertising everywhere." 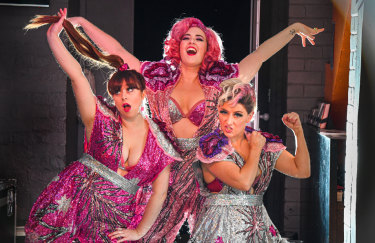 Song subjects range from the sexist history of pockets to normalised oppression and calling a vulva a vulva (not just a vagina).

It all began over a round of Bloody Marys at the Edinburgh Fringe in 2016 when the three were performing in separate shows.

“We were discussing the numerous uncomfortable or awful, misogynistic experiences we’d had in the past week or so,” Hutson says. “Just going ‘Urgghh’. That inspired us to write together.”

In the process of researching misogyny and sexism, they began discovering facts about the female body, in particular information they had never been told or taught about.

Waters remembers reading about the nerve endings in the vulva area being “as complex as a constellation of stars and as individual as a fingerprint”, proving various theories around sex to be myths.

“It blew my mind in terms of how many people feel inadequate or confused or ashamed about how they experience sex and pleasure,” she says.

Glittery Clittery, which is directed by Clare Bartholomew, also includes a game show called Lagoon of Mystery, in which contestants are quizzed on the correct names for areas of the vulva, before being encouraged to make up their own names.

Hutson says many people are visibly moved by issues in the show, with men and women of all ages recognising how little they knew about female bodies or how inequality has affected them all their lives.

“When you talk about ‘education is power’ you need to be welcoming to people,” she says. “A good laugh is a classic way of discussing deep and important issues that can help people.

“And, if you’re going to have to fight the patriarchy every day do it in sequins with a glass of champagne in your hand and have a giggle. Because we’re stuck with it until it comes falling down.”