After a 10 night residency at London’s The O2, Queen and Adam Lambert have come to the end of their UK tour and are now gearing up for mainland Europe. During their epic set, Brian May takes up an acoustic guitar and sits on a stool to perform Love Of My Life and ’39. But during one of the concerts, he broke rank and treated fans to a bit of nostalgia.

Brian was filmed saying: “I’m going to try this just once if I can do it without screwing it up.” The Queen legend then began to sing Maybe It’s Because I’m A Londoner, which the audience quickly joined in with.

The almost 75-year-old captioned the post: “Maybe it’s because I’m a Londoner – a quick nostalgic interlude sung by me and about 18,000 Londoners (from all over !) in the O2 this very night ! Thanks guys !!! And thanks @sarah_rugg for the capture – from a well-planned vantage point ! Bri.”

Want to listen to your favourite artists and the latest songs? Sign up for a free 30 day trial at the link to listen to unlimited music on Amazon Music! 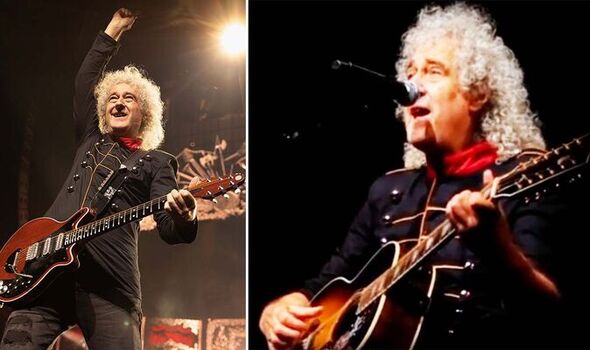 Maybe It’s Because I’m A Londoner was originally composed in 1944 by Hubert Gregg, who was on leave during the Second World War when he wrong the song.

It’s been covered over the years by numerous artists including Bud Flanagan and Davy Jones.

On Queen and Adam Lambert’s last night at The O2, Brian posted a video of backstage and captioned it: “This is what the O2 looks like from the business end ! Not glamorous but nevertheless very exciting. I feel very lucky to have had the chance to play TEN sold-our shows here – the stuff of dreams. And … most wonderful of all … to see so many happy faces, welcoming hands, warm hearts. Bless yo’all !!! Let’s Rock for the final night !!! Bri.”

Reflecting on the 10 night residency and looking ahead to the European tour, Brian wrote in a new Instagram post: “Au revoir London !!! This little gem of a post pretty much sums up how I feel right now. Suddenly our series of London shows is completed – 10 packed and riotous concert nights – part of probably our most physically challenging yet most emotionally rewarding run around the UK ever. And now we grab a much-needed two-day break, and head out to Europe for a month of serious touring. I’m excited. Very !”

Queen and Adam Lambert’s next stop of their tour will Berlin on Friday, before playing in Cologne on Sunday. The trio will also be performing in Holland, Spain, Italy, France, Belgium, Denmark, Sweden, Norway and Finland.