Feel the frisson as Frisell and fellows fire up the Jazzlab

However plush a concert hall might be, it’s hard to beat getting up close and personal with international artists in the intimacy of a club setting. Presenting acts like Bill Frisell in a small venue is a luxury only festivals can afford, and a palpable frisson of excitement rippled through the Jazzlab on Monday as the revered guitarist took to the stage. 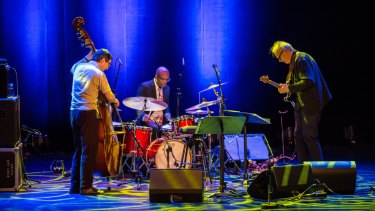 An inveterate explorer, Frisell coloured his vignettes with warm tremolo, spidery loops or clouds of distortion while shepherding each melody with great care and affection. Morgan and Royston were simultaneously unobtrusive and interactive, adding depth and texture to Frisell’s riveting tales.

The following night, another American guitarist – Miles Okazaki – presented solo selections from his epic six-volume Work, which tackles the entire oeuvre of Thelonious Monk. Unlike Frisell, Okazaki used no effects on his guitar; instead, he relied purely on his touch, fertile imagination and deep affinity for Monk’s music to nudge the tunes in new directions, adding fleet arpeggios, pungent accents or snatches of breezy Brazilian bossa.

An hour later, German pianist Florian Hoefner led his group through a memorable set drawn from his latest album, Luminosity. Hoefner met his bandmates (bassist Sam Anning, drummer Peter Kronreif and saxophonist Mike Rivett) while all four were living in New York, and this show felt like a joyful reunion.

The foursome darted with admirable fluidity across the metrically mind-bending In Circles, relished the quiet soulfulness of North County and danced with barely contained energy on the irresistible Newfound Jig, inspired by Hoefner’s current home in Canada.