Can appealing to the wisdom of Pele (the Hawaiian goddess, not the footballer) and the spirits of our region’s seafaring ancestors through song get us out of this global ecological mess?

Tackling climate change, experts agree, involves a nuanced dance between the technical scientific world and the ineffable, immeasurable world of culture. Music, in particular, can convey meaning in a way that rational analysis cannot.

When filmmaker and music producer Tim Cole studied the Intergovernmental Panel on Climate Change’s fifth report in 2014, his response was to set about transforming bleak facts and data about the impact of rising sea levels in the region into empathy and compassion. He wanted to show that climate change is more than a policy problem; it’s also about loss and disruption. 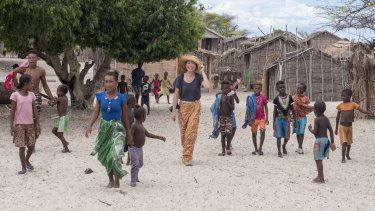 He and his Taiwanese partner, project manager BaoBao Chen, spent the next four years recording songs by 100 musicians representing 16 island nations across the Pacific and Indian Oceans whose homes are on the frontline of global environmental destruction. The result, Small Island Big Song, is a multi-platform album of remarkable resilience, rather than doom and gloom bombast.

Opening with a traditional chant sung on a headland in Taiwan, it heads next to Rapa Nui (Easter Island) then across the Mozambique Channel to Madagascar, Papua New Guinea, Singapore, Malaysia, Aotearoa/New Zealand and the Solomon Islands, to name but a few. In that way the album also pays homage to the ancient Taiwanese migrants who pushed out their boats 5000 years ago, embarking on a seafaring journey across half the earth’s surface and creating an extraordinary cultural diaspora. 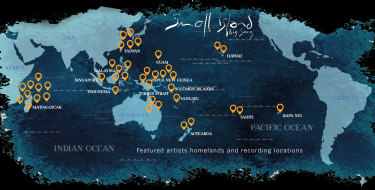 A map showing the island homelands of artists who took part in Small Island Big Song to raise awareness of the impact of climate change.

In a kind of reversal of tectonic drift, the island land masses have become fused into a supercontinent of sound. Indigenous instruments, some made from driftwood and many from bamboo, blend with voices that share similar traits. Impassioned choruses are interspersed with meditative passages and the accompanying cinematography offers paint bombs of colour. The result is both contemporary and ancient.

"What we are hoping to do is remind us all that there were stories before the current ones and even stories beyond that too, that we are trying to reach back to find in this musical lineage," says Cole, speaking from the mountains of Taiwan, where he and Chen are visiting relatives.

Cole and Chen kept things as close to nature as possible, turning up at remote locations in rainforests, beaches, cliffs and volcanoes with just a mic, a laptop and a camera, seeking out indigenous elders to guide their endeavours. Everything was constructed from the grass roots up.

"We just said 'share a song that you are proud to represent your heritage and we just let it go completely'." 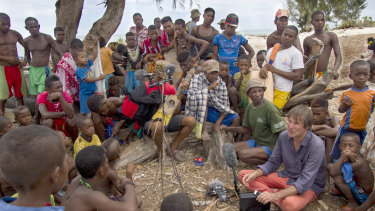 Tim Cole during a recording session with the Ankievo Village Band in a remote part of Madagascar.

Waves, wind, insects and the occasional chicken add a visceral soundscape to the traditional instruments and raw, passionate vocals that lament loss of species and habitats while invoking spiritual strength.

Travelling on a shoestring budget, boosted by grants including a Churchill Fellowship, the pair took each island song to their next location, where they would ask local musicians to add another layer.

Cole then mixed the performances to create bespoke tracks that accentuated both the similarities and differences of traditional instruments, voices, language and rhythm. They feature an intriguing range of sounds, including log-drumming, panpipes, Polynesian ukeleles, the Borneo rainforest and a rapper from Madagascar.

During their travels they met a lawyer in Papua New Guinea who was negotiating land rights for climate refugees being forced to move because of rising sea levels; in the Solomon Islands, they visited a village where higher tides mean that every home must have a canoe. But Cole insists the album "is not about pointing fingers or presenting facts – we can all read those every day in the papers. Our role as artists is to motivate the will for action, not the ways".

Small Island Big Song was released in Europe, the US and Taiwan 18 months ago, premiering at the South by Southwest Festival in Texas in 2018, followed by a headline tour of festivals in Europe and Asia, where they played to enthusiastic crowds of 15,000. 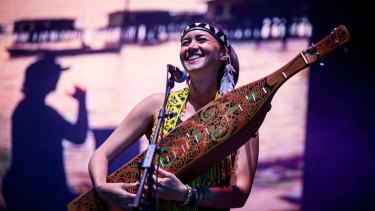 Alena Murang of the Kelbit people from Sarawak during a concert for Small Island Big Song. Credit:Photo: J. Ortega/Etnosur Festival

Along the way it won Britain’s Songlines Music Awards' Best Asia/Pacific Album. They headed to Europe first, says Cole, "because we felt a need to get the story out there to the biggest audience to make the biggest impact as quickly as we could, so we worked with regions most removed from the islands".

"But now it is time to bring the story back to Australia," adds Chen.

And so the album is to be launched in a concert at MTC’s Lawler Theatre, aptly on International Day for the Seafarers. On stage will be artists from Taiwan, Aotearoa, the Solomon Islands and Rapa Nui/Easter Island, who will perform in front of a cinematic backdrop.

Following this and a concert in Sydney, the musicians will join Chen and Cole for a second European tour, where they will headline Rudolstadt Festival in Germany and Colours of Ostrava festival in the Czech Republic.

Also planned is the development of an educational package, workshops, panel talks, residencies and a university tour of the US and Scandinavia. In the fight against climate change, it goes way beyond owning a Prius and a reusable shopping bag.

Chen and Cole (who married on board an NGO cruise ship during the making of the album) are aware of the inherent tension that exists between raising awareness and exploitation.

Small Island Big Song, is, they say, a Fair Trade music release, with 50 per cent of the profits going back to the contributing artists and NGOs.

Cole, who has spent the past 30 years working with Pacific Island and Indigenous Australian communities, has firsthand knowledge of how we have to move beyond the scientific and rational debate to address climate change.

His work has led him to some of the most remote areas in the Asia/Pacific region in an effort to add ballast to the mirage generated by the limited ability of scientific language. Hope, for him, lies in commonality and connection.