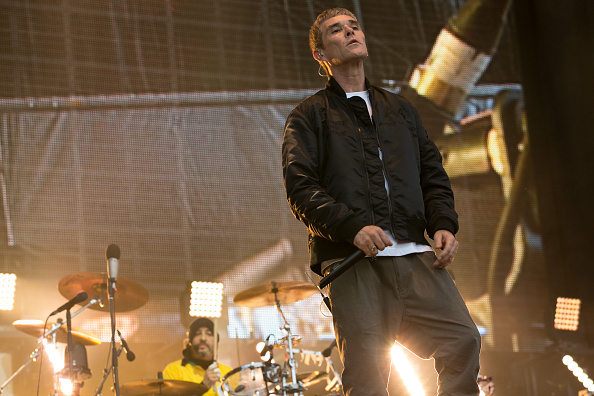 Ian Brown fans were left rather dissatisfied following his Leeds gig on Sunday night, after the singer performed without a band and using a backing track.

His show, which kicked off at the O2 Academy Leeds at 7pm, saw Brown take to the stage for the opening date of his first UK headline tour in over 10 years.

However, fans were left unhappy with the standard of performance, with the former Stone Roses fontman appearing on stage to perform without any kind of backing band.

Clips have since circulated online of Brown performing at the show, showing a rather subdued crowd nodding along to his live singing with a heavy backing track and all-but empty stage.

‘Gutted to see @ianbrown turn up to his £40 a ticket, sold out gig at leeds tonight WITH NO BAND,’ tweeted one attendee. ‘I’m a life long fan but it was bad.’

They added: ‘Ian Brown does karaoke and butchers his own tunes. Most were too p*ssed to care but I had to get out after this one. Longsight M13 was a highlight.’

‘Me and my wife lasted 36 minutes exactly before walking out,’ shared another fan present for the set. ‘I think the auto tune on the microphone lasted 3 songs. Real shame as I was looking forward to seeing him solo as only ever seen stone roses. No band at all was a let-down.’

‘£40 to see a karaoke act,’ another complained, while one wrote: ‘If Ian Brown is playing live with a backing track then he’s proper ripping the fans off and should offer them a refund.’

Brown, who was a noted lockdown critic and refused to perform at venues using Covid passports previously, performed a 23-song set devoid of any Stone Roses material too, which was frustrating for some fans.

‘Ian Brown signing over backing tracks in Leeds tonight. No live band on stage. Wtf?’ asked another gig-goer, while one punter stated: ‘Ian Brown charging £50 a ticket to only sing his solo tunes, over a backing track, with no band is quite something.’

‘Wow, that’s horrific. A massive Roses fan but think he needs to retire gracefully now like,’ observed an online fan after watching footage, with another branding the situation ‘contemptuous’.

One ticket buyer sort of defended the singer, sharing: ‘[It’s] just very hollow without the band. [Brown’s] voice was OK I thought. Acoustics in Leeds 02 are strange, in front of stage is always good but under the balcony section always sounds tinny in my opinion.’

‘If you are a fan of Ian Brown’s solo stuff and you have tickets for his tour, you’ll love it but don’t go expecting Stone Roses songs or a backing band as he has neither,’ they posted.

‘The crowd loved every minute of that last night, don’t believe the hate….’ claimed another.

Having brought him out on stage for his pair of Knebworth shows back in June, to perform Oasis’ 1995 classic Champagne Supernova, Gallagher said he was ‘serious’ over the prospect.

Metro.co.uk has contacted a rep for Ian Brown for comment.