Given that ambient music is the sonic stepchild of the synthesiser, there is something gently ironic about the fact that one of the genre's great masterpieces – Jonsi Birgisson and Alex Somers' Riceboy Sleeps – was created off the grid.

The album, first assembled in the apartment the couple shared in Reykjavik, Iceland, was finished after they relocated to a commune in Hawaii, their laptop and speakers powered by an extension cord which they ran through the woods from a solar-powered community kitchen to their cabin. 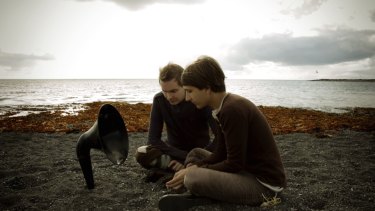 "There was nothing around, no neighbours," Somers says. "It was very homemade, very DIY and lo-fi. We weren't particular about it. We just built it. I think that's the space in which it was born. Hopefully that's the space that people find in themselves when they hear it and connect to it."

Somers describes Riceboy Sleeps as "the blueprints of our relationship in a lot of ways, musical and personal."

The pair have returned to Riceboy Sleeps after a decade to present an expanded version of the album at Vivid Live, supported by the 21-piece Sydney International Orchestra and a 12-member choir, with arrangements by David Handler conducted by Robert Ames.

It is the first time the work has been performed in full and in sequential order; its only previous performance, at the 161-year-old late Victorian Gothic Revival-style St Paul the Apostle Church in New York in 2010, included only selected tracks played out of sequence. 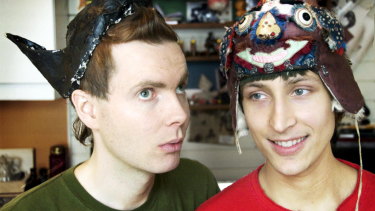 In addition, the pair have added three new tracks to the main set and included previously unreleased material from the mini-album All Animals.

"It's a rare thing for us to look backwards," Somers tells Spectrum. "We typically try to not be too sentimental and backwards looking. We're always trying to move forward to new exciting things, but it feels relevant at the moment. I think it's going to be a really good feeling to do this."

Somers and Birgisson first met in Boston, in 2003; two years later Baltimore-based Somers relocated to Reykjavik, Iceland, where the pair were based for more than a decade. Birgisson, who was born in Iceland, had achieved international fame already as a member of the avant-rock band Sigur Rós.

His solo career, and his collaborations with Somers, substantially emerged in the wake of a hiatus taken by Sigur Rós between 2009 and 2012, though the band has since reformed, toured, recorded music for the TV series Black Mirror and even filmed a guest appearance in Game of Thrones.

Somers also worked extensively as a music producer and sound engineer in Iceland, producing albums for Sigur Rós, for Birgisson's solo career and also for other artists including Julianna Barwick and Briana Marela, as well as the soundtracks to the films Aloha, How To Train Your Dragon and Captain Fantastic. 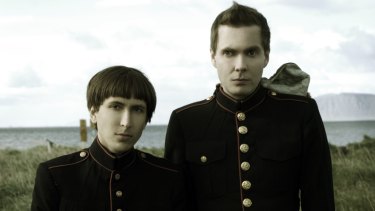 Spectrum's interview with the pair takes place at a cafe on the border of Silver Lake and Angelino Heights, two hipster neighbourhoods in Los Angeles, where they have been based for more than a year. They saunter into the interview dressed casually, a far less dramatic visual than the militaristic look of their stage wardrobe.

Returning to Riceboy Sleeps after almost a decade, Somers says he was struck by the technical simplicity of it.

"Musically, if you just look at the notes on the page or hear the harmony, I think it was very us and of the time," he says. "I think we're not a million miles away from that. It still feels relevant to how we build music, both of us.

"But on the technical level, I feel like it was really immature because we used the shittiest microphones," Somers adds, laughing. "We didn't give a f— about anything proper. It was made very DIY and ghetto."

It was not until after they had finished that album that Somers did a deep dive into audio engineering.

"There's nothing professional about that album," he says. "When you listen to it now, I just hear as an audio engineer, it's so imperfect. There's no clarity or separation. The mixes are very amateur."

"I love controlling sound [now]. I love giving sound space, choking sounds to death, or experiencing sound. Jonsi and I both love recording things really deliciously and hi-fi. Then we play it back and we dub it to a micro-cassette recorder."

Since relocating to Los Angeles, Somers has continued scoring films – his latest is a still-untitled Baltimore-set feature about a street gang named the Twelve O'Clock Boys – and Birgisson has been dabbling in perfume-making.

Birgisson notes that the last of those, a self-taught hybrid of aromachology and organic chemistry, and the fact that he and Somers are both professional chefs, are both connected to their musical work.

The pair have also been working on their "lying-down" concert project with collaborator Paul Corley, using the stage name Liminal; those shows are exactly as they sound, performances where the audience lays on the floor, listening to ambient music.

"It's not like being with your friends drinking. You're by yourself, laying," Birgisson says. "When people are together, a few hundred people together in a room, but everybody is by themselves, and they maybe have their eyes closed. It's like a group meditation. It's more powerful than if it was by yourself. It's a good energy."

The experience emphasises the community within the music, Somers says.

"It's really cool, this idea of almost feels ritualistic," he says. "We're not attaching any meaning to it. We're not saying what it is. Almost the same could be said for us doing these Riceboy Sleeps songs.

"It's less culty than the Liminal thing because there's no fog machines, you're not laying on the ground," he says. "It's certainly a patient musical gesture, [and] we're not trying to tell you what it is, we just offer it. Hopefully, people can connect to it and feel community."

Jonsi Birgisson and Alex Somers: Riceboy Sleeps is at the Sydney Opera House as part of Vivid Live on June 11.