Halfway through Mitski’s show at Central Park’s SummerStage on Sunday, the singer lay face down on a white wooden table, grasping the mic to deliver the opening lines to “Geyser.” The first track on her critically acclaimed 2018 album Be the Cowboy, the song clocks in at just over two minutes and steadily escalates, reaching a zenith as Mitski compares herself to a hot spring ready to burst. As she rose off the table, she flipped it on its side and crouched behind it. “Though I’m a geyser,” she sang, “Feel it bubbling from below.”

That image of looming change felt apt for the occasion. Mitski isn’t quitting music, but she declared her pair of Central Park gigs on Saturday and Sunday to be her last indefinitely. “It’s time to be a human again,” she tweeted this past June. “I’ve been on non-stop tour for over 5 years, I haven’t had a place to live during this time, and I sense that if I don’t step away soon, my self-worth/identity will start depending too much on staying in the game.” Soon after the final shows were announced, she deleted her social-media accounts, feeling that with no new albums or tours to promote, she could finally break free.

Opener Lucy Dacus emphasized the significance of Sunday’s occasion, concluding her set by telling the crowd, “You are all about to witness history.” As Mitski took the stage, wearing black jazz shoes and knee pads, it was evident Dacus was right. Opening with “Goodbye, My Danish Sweetheart,” a crowd favorite from her 2013 sophomore LP, Retired From Sad, New Career in Business, Mitski soared through octaves while walking in a straight line toward the table and chair, a determined, deadpan stare in her eyes.

She utilized the furniture for 19 songs, dancing in synchronized movements and rarely stopping in between them to speak except for after the third, where she delicately informed the crowd, “Hello, my name is Mitski. This is my band” before introducing her backing musicians — guitarist and producer Patrick Hyland, drummer Bruno Esrubilsky, keyboardist K. Marie Kim and bassist Jeni Magana. She sat up straight in the chair during the passionate “Old Friend.” She laid on the table, looking up at the ceiling while she brought her legs over her head, kicking back and forth during the thrilling final moments of “Why Didn’t You Stop Me?” During the pulsating “Washing Machine Heart,” she firmly lifted one leg up onto the table like the hand of a clock, moving it so independently of her body that she resembled Loonette from The Big Comfy Couch.

Though Mitski’s use of stage props isn’t anything new, her fans still adored every second of it on Sunday, cheering wildly at the mere touch of her finger on the table leg. The show made it clear that, seven years after the release of her debut (2012’s Lush) and five years after achieving breakout success with Bury Me at Makeout Creek, she’s established herself as one of the most beloved figures in indie rock. The crowd chanted the lines to every song, most notably on the Cowboy single “Nobody,” in which they screamed the chorus over and over, a sea of nobodies finally feeling that they belong.

After tearing through most of the Cowboy tracks, Mitski immersed herself in a segment of songs from 2016’s Puberty 2, including “Thursday Girl,” “I Bet On Losing Dogs,” and blistering rocker “Your Best American Girl.” The evening became even more intimate when she dismissed her band and the furniture and plugged in her acoustic guitar for “A Burning Hill” and “My Body’s Made of Crushed Little Stars,” finishing the latter song’s final moments by screaming “Kill me, Jerusalem!” before quietly exiting for an encore.

Though she closed the show with “Carry Me Out,” it was really “Two Slow Dancers,” the dazzling final breath of Cowboy, that felt like a farewell. Mitski performed the slow, stripped-down track backed by only Kim. The song’s intimate final line — “We’re two slow dancers, last ones out” — could have been intended for the audience, who by that point had filled every inch of Central Park’s Rumsey Playfield, silently listening to her every word. 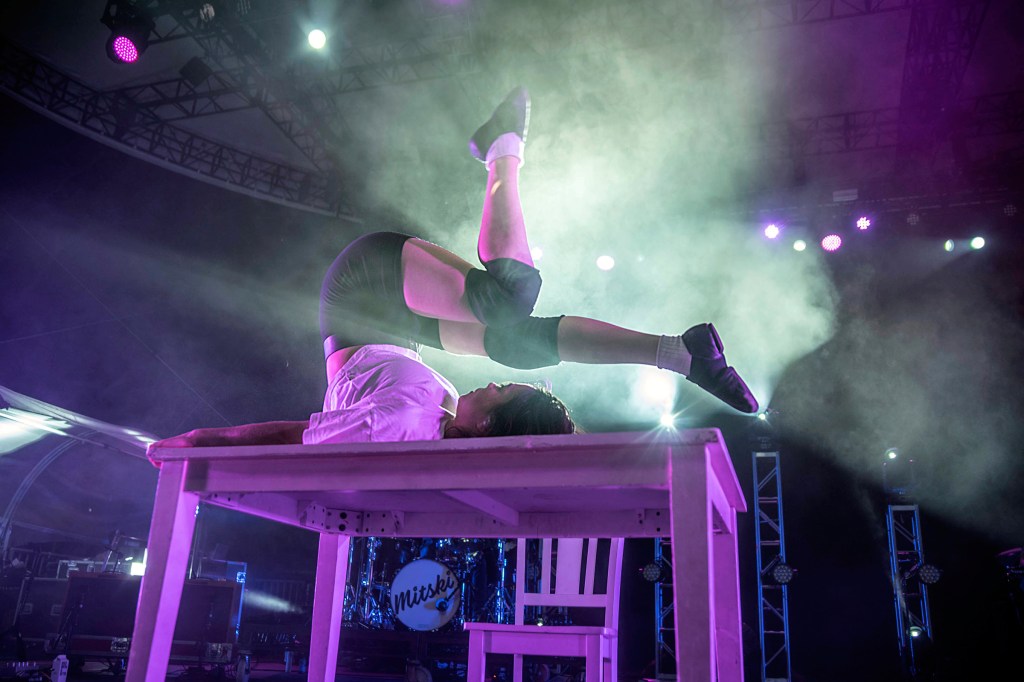 It was only fitting that Mitski ended her tour in the heart of Manhattan, where she began her career quickly after graduating from SUNY Purchase in White Plains, New York (fellow alumni joyously screamed the college’s name in between songs). It’s unclear when she’ll return from hiatus, but the past five years have cemented her as an unforgettable voice. “This is all I ever wanted in my life,” she told the crowd. We believe it.