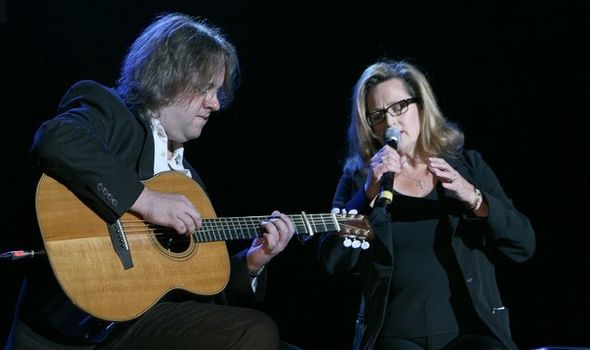 “I decided to take it up during the first lockdown,” reveals the singer from her home in Edinburgh. “I felt I should do something active, what with the gyms being shut – not that I went to the gym that often.” This would be impressive for anyone, but the feat is all the more impressive considering Barbara is now 74 and spent a lifetime eschewing exercise.

“I rarely worked up a sweat. I considered cycling but I’d never found that particularly sweat-making, either. So, running, well, it was hard going at first – horrendous, in fact. I couldn’t run at all,” she admits with a smile.

“I’d jog for about 10 yards before doubling up and hanging over the back of a park bench, but I made myself do a bit more every day. Now I’m running about 3km every weekday. I take the weekends off. I don’t like pounding pavements so I run in the park on grass, where I can see the trees. I love it and even like running in the rain. I get such a sense of achievement when I finish. It’s the endorphins, I guess! I feel great.”

Barbara clearly prefers trying to keep the years at bay naturally rather than resorting to cosmetic improvements. In fact, she sees such artificial interventions as a kind of betrayal.

“I want real women to be appreciated for what they are and how they are. I don’t understand why my sisters in music and culture would do that to themselves. I would never ever do anything like that because I just think it’s a betrayal of the sisterhood.”

WHAT Barbara does approve of, though, is keeping a close eye on what she eats and drinks in order to keep herself in tip-top condition.

“I eat within an eight-hour window and have, when possible, just one meal a day,” she explains. “Usually a late lunch or early dinner. It’s great for my metabolism.

“I don’t drink much alcohol, either. Just the odd glass of something at weekends. That’s not a moral thing, by the way. If you like a drink, have one! But being quite strict with myself, combined with running, is something that works for me. It’s not about being thin. If you get too thin at my age, you can get very, very wrinkly. It’s about feeling well – and, touch wood, I feel very, very well at the moment.”

“I’m proud to say I don’t have to take any medication regularly,” she says, before adding hastily: “But, listen, it could all go to doo-doo at any time and there’s no way I’m telling people what they should or shouldn’t do but it works for me.

“Mum didn’t overindulge, wasn’t overweight, looked great, and was very active. If she hadn’t had an unsuccessful hip replacement when she was 85, I’m convinced she’d still be here. She’d be 103! Mum was never ill before that.”

Before the mother of three grown-up sons, who was awarded an OBE in 2002 for services to music and drama, and starred in the last series of The Real Marigold Hotel with Britt Ekland, embarks on a 24-date tour around the country in March, she is performing a handful of live “spoken word” dates based on her recently updated autobiography,A Shirt Box Full of Songs.

“There’s no singing – I’ll be talking about my life and career, and doing a bit of Q&A at the end,” she explains. “I enjoy it. Since the book originally came out, all kinds of things have happened in my life – my mum’s death, our three boys going out into the world, moving from Lincolnshire to Edinburgh with my husband, Ollie.

“People also seemed to be interested in how a wee girl from a council estate in Dunfermline became the Barbara Dickson you see on stage.” It is indeed a fascinating story.

Starting out in the 1960s performing in folk clubs and working men’s clubs in the Scottish town, Barbara ended up becoming a bestselling, international recording artist who travelled the world.

She recalls how music was always part of her life, from an early age. “There was always music and laughter in the house,” says Barbara. “My dad was a cook so he was pretty good in the kitchen and had a great sense of fun. My mum was a real Liverpudlian so growing up with them was never dull. I loved singing when I was very young and I don’t think that has ever changed.

“When I look back I don’t really know why I didn’t go to drama school or something from an early age. There wasn’t a local theatre so I never saw shows exactly and were not in the sort of area or time when kids went to drama school.”

Barbara’s first “proper job” was working in a registrar’s office in Edinburgh. “I was only 16 but in the evenings I went to folk clubs and sang. That’s how it all began, but I had no idea or strong ambition that drove me towards the career that I have had.”

Nevertheless, despite having no formal training, Barbara went on to be a glittering success, helped in large part by her friendship with dramatist and composer Willy Russell. “Willy gave me lots of advice and gave me a break in his musical, John, Paul, George, Ringo… and Bert. It was brilliant and added a whole new world of musicals to my career.”

Barbara won two Olivier awards for her stage performances in musicals Spend, Spend, Spend and Blood Brothers, became something of a muse for Andrew Lloyd Webber, and then an unlikely residency on The Two Ronnies catapulted her to nationwide stardom. “Millions watched me and that was another great boost for my career,” she says.

She may have been performing since her early teens but she has no plans to give up. “I love singing as much as I ever did and have absolutely no plans to stop. Why should I? If I was a fine artist, I wouldn’t be expected to stop painting because I’m 74. As long as I’m fit and well, I’ll carry on.

“But the day that I do sing as badly as some people do when they are my age is the day I am going to throw in the towel.

“There comes a time when you can’t sing any more. The size of one’s ego has to be commensurate with the amount of ability one has. That’s when I’ll stop.

“But even when I do, I’ll still be involved with music and performing in some shape or form. I may teach singing or pass on my knowledge of stagecraft. But that’s all in the future. It still sounds great and I still get goosebumps performing on stage with my band.”

IN ADDITION to singing new material from her most recent albums, Ballads And Blether and Time Is Going Faster, when she goes back out on the road in March, Barbara will be performing her hits – much-loved songs like Another Suitcase In Another Hall, Caravan, Answer Me and January February.

“I never get tired of singing them and can’t imagine that I ever will,” she reveals. “Actually, I probably don’t sing them enough! My audiences love those songs as much as I do and I see how much joy it brings when I perform them.

“The songs have an intimate quality that people seem to love and hearing them takes them back to a special time in their lives – maybe they met their life partner at the time when the song was released. It’s a kind of spiritual thing, I think.

“My audiences come and see me because they love those songs and I know they’re what they want to hear.” And the Scottish singer says she is happier now than she’s ever been.

“Oh, it’s horrendous being young,” she says, laughing. “You’re so worried about how people perceive you. It must be even worse now because of the pressures of social media.

“I don’t think I realised my potential until I was about 45. I didn’t have my kids until my late 30s which, back then, was regarded as being quite old.

“These days, I’m relaxed, people can take me or leave me and I’m very happy in my own skin. Would I like to be 17 again? Absolutely not!”