Johnny Cash played at Brisbane’s Boggo Road Gaol twice in the 1970s, according to veteran Brisbane-born singer Tex Perkins as he prepares to return to the river city for his tribute show, The Man in Black.

On the second occasion Cash was ejected, Perkins insists.

Boggo Road historian Christopher Dawson says it’s not true that he played there – but it’s a fantastic urban myth. 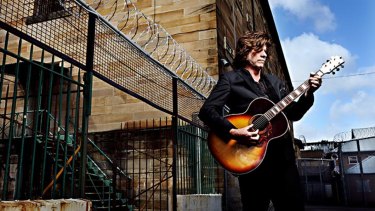 Tex Perkins when he performed at Parramatta Jail.

Perkins has played Johnny Cash at Boggo Road before – but this time it’s a different show, painting a fuller picture of Cash.

“That was our Far from Folsom concept, which is not The Man in Black show,” Perkins said.

“The Man in Black show is more the story of the entirety of his own life,” he said.

“The Far from Folsom was more of a ‘What if Johnny Cash played here?’ because he played in Brisbane a lot.”

You can hear Tex Perkins grin over the phone.

“When we played at Boggo Road it was part of a tour of old jails; they weren’t operating jails, they were shut down,” he says.

“Most of them had historical societies attached to them and they would do tours of the prison.”

It was through one of those historical societies Perkins was told Johnny Cash played Boggo Road Gaol.

“The guy at the historical society told us of this legendary story where Johnny played not only once, but twice,” he says.

“The second time – believe this if you will, believe it or not – he was ejected from the prison for being too provocative.”

“He was kind of playing up to the outlaws. He had lots of songs about being an outlaw and a lot of them of them are not ‘Oh, poor me I’m an outlaw, they’re Yippee, I’m an outlaw!”

“There’s a lot of anti-authoritarian attitude mixed through that and to get the crowd on side, he would milk that.

“Apparently some governing bodies did not like it and one night at Boggo Road he went too far and they said ‘Sorry, you’re out’.”

“Whether or not it’s a true story or not, I’m prepared to retell it.

“He did spend a lot of time here. He actually owned property here near Strathpine.”

Cash played concerts at Folsom Prison in 1968 and at San Quentin in 1969 and released live albums from both. 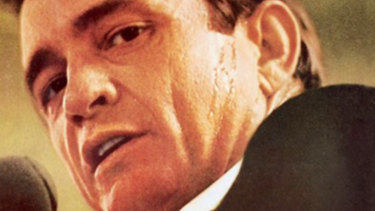 Covert art for the album, Johnny Cash At Folsom Prison.

Both albums are virtual bibles for any music fan, showing how country, hillbilly blues, bluegrass and gospel morphed into the strange animal that became rock'n'roll.

Johnny Cash, quite rightly is one of the bookends of contemporary music. Read through Robert Hilburn’s Johnny Cash: The Life and you get an idea.

Perkins is about to take The Man in Black stage show – complete with his band – back on the road to mark the production's 10th year of shows.

"The Johnny Cash story is almost mythical, it has all of those elements,” he said.

“It’s the rags to riches story with the dead brother, (who dies very young), the disapproving father, drug addiction, redemption and it's got a love story,” Perkins says.

“But essentially it is a study of the duality of his character,” he said.

"On one hand he was a flag-waving, God-fearing family man.

“Yet on the other he was an outlaw, drug-addicted country singer known for his anti-authoritarian stance.

“I guess the show is an examination of that duality in his character.

“I know a little of the duality that is required.”

The 2010 The Man in Black: production won an Helpmann Award, recognising its production values.

For the uninitiated, an 18-year-old Greg Perkins from Brisbane became Tex Perkins and frontman of Tex Perkins and the Dum Dums – “where half of our set was Johnny Cash tunes” before heading south a long, long time ago to front dozens of bands.

Most influential and most successful of these were The Cruel Sea, the Beasts of Bourbon and the trio Tex, Don (Walker) and Charlie (Owens).

But they are different stories.

Tex Perkins and his band – including stylish acoustic slide guitarist Matt Walker – will also play a specially created set at the Gympie Muster this year.