In an astonishing turnaround, The Song Company – the nation’s best-known professional vocal ensemble – has come back from near-death after the intervention of a mystery donor with deep pockets.

The company went into voluntary administration more than a month ago, after its directors became concerned it would no longer be able to pay its bills.

Since then, musical director Antony Pitts and board chair Michael Tidball have been working frantically to revive the stricken company.

Earlier this week, creditors unanimously approved the administrators’ proposal to return control of the business to its board.

Pitts said he had contacted a long-time supporter for assistance as soon as the administrators were called in.

“It’s someone who has been very interested in and appreciative of the work I’ve been doing with the song company, but who wasn’t a donor,” he said. “That person, who wants to remain anonymous at this stage, immediately offered an injection of enough money to mean that we would be solvent.” 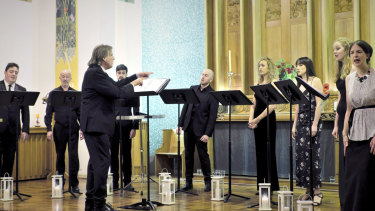 There will likely be some new faces in upcoming Song Company presentations.

However, that financial lifeline was only the beginning of a process Pitts described as “hair-raising and exhausting”.

“In terms of cash, the problem was solved immediately but because the process of administration had been started it then took several weeks to get to a point where legally we could resume trading.

“That meant convincing the administrator that our finances were sound going forward.”

After the administrators were appointed on May 13, their first move was to make all the staff, singers and Pitts himself redundant.

The personal toll had been immense, he said.

"We all lost our jobs and the company that we had been working so hard for and had been so excited about plans for its future was suddenly in the balance. It’s been a deeply troubling time.”

Pitts, who took the helm in 2016 after moving his family to Sydney from his native England, admitted there were times when he had considered returning to the UK.

“It’s been a time of great personal reflection and a time to think, 'What am I actually doing here?’” he said.

And, while Pitts remains committed to the ensemble, a number of the permanent singers have decided to move on, meaning there will likely be a lot more new faces on stage.

“I'm expecting quite a refreshed line-up in coming months and years,” said Pitts. “It’s a good opportunity to offer some of those guest artists more regular employment.”

The period of administration for The Song Company could scarcely have come at a worse time, as it hit just as they were gearing up for their annual donations campaign.

Despite the cash injection, they are far from being out of the financial woods and must now face the reality of a “razor-thin” operating margin.

Pitts said he was confident they would be able to deliver the rest of the season with some “minor tweaks”, adding that nothing was off the table regarding future programming.

“We're looking at everything but our mission remains to provide absolutely top quality, unique world-class programming of things you can’t find anywhere else."