Lonnie Holley sits at a Casio keyboard under a statue of the crucifixion, his grey dreadlocks jutting out at right angles, the clump of homemade bracelets on his left forearm flashing and jangling.

“London, oh Lon-don, I am so glad to be here,” he croons in his haunting way, as two young musicians on drums, synths and trombone thunder, sparkle and foghorn around him.

“I’ve been thinking about humankind and the deep unknown jungle we come from,” he sings, whistling a tune then buzzing his lips: brrrr. “And how we all connect up together, yeah.” 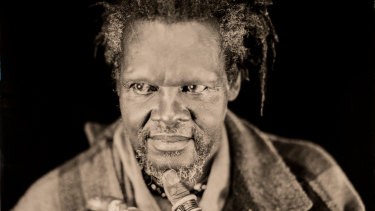 A crowd seated on pews at St John on Bethnal Green, a church-come-arts venue in east London, is listening intently, soaking up truths delivered by a grizzled yet cherubic man with a shamanic air gleaned from a life lived in the margins.

It’s the last gig on Holley’s UK tour, and the African-American artist and musician, 69, is improvising a set inspired by themes that inform his work: race and identity, space and time, the environment and the resilience of the human spirit.

There are a couple of familiar tunes from his current third album, Mith: the elegiac I’m A Suspect, which registers the mood of the Black Lives Matter movement, and I Woke Up (In a F–ked-Up America), a growling, zeitgeist-lassoing number that underscores why Holley is regarded by many fans and collaborators – experimental pop band Animal Collective, indie pop guru Bill Callahan – as a soothsayer.

“I’m just an instrument of the ancestors, for generationable betterment,” Holley told me earlier, sitting on a couch in a B&B that happens to be an old vicarage. “We have to wake up and claim what is ours, for the sake of humanity’s rights.”

Having clasped my hand, our thumbs touching, to deliver his trademark greeting “Thumbs up to the Universe!” Holley insists we mark our new friendship by clinking teacups low over the microphone of my recorder. “British tea time and all that.” A pause. “What time is tea time?” he wonders.

On the couch opposite, checking his smartphone, is tour manager Matt Arnett, 51, long inured to his friend’s left-field quirks and thought-trains, his “Lonnie Hollification of language”.

A fellow resident of Atlanta, Georgia, Arnett is the son of Bill Arnett, a curator of outlier African-American artists from America’s deep south, and a figure who has helped propel Holley from amateur sculptor (he’s been compulsively making work from recycled junkyard material since the early 1980s) to exhibiting at the Smithsonian, the Met and the White House. 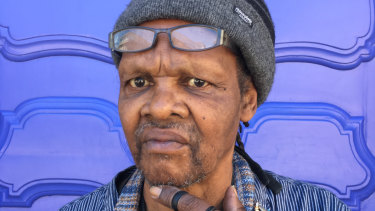 Lonnie Holley: “I just make the joyful noise I grew up with.”

“My dad insists there should be no hierarchy in art and always puts Lonnie and Picasso in the same sentence,” says Arnett jnr, gazing over at Holley, whose glasses are pushed up onto his forehead and is wearing a blue jacket, cargo pants, found accessories (including nappy pins, pan-African coloured beads and a child’s cream shoe-buckle on a leather thong) and socks and Crocs.

“I started visiting Lonnie as a teenager and wish I’d paid more attention to his music then,” Arnett says. “There was this tape of a song that went for 90 minutes. Like most of the critics who loved his first record” – 2013’s Just Before Music – “I couldn’t define his sound. I just knew it was unique.”

As is Holley’s backstory, a real-life fractured fairy tale about a boy born the seventh of 27 children in Birmingham, Alabama, whose babysitter, a burlesque dancer, traded him for a bottle of whisky when he was four. His foster dad ran a juke joint between beating Lonnie and making him dig for worms to sell; forbidden from the house, Lonnie hung out on the roof, watching drive-in movies on speakers he’d rigged up himself.

Aged nine, a car accident put him in a coma for three months, after which he was sent to a juvenile labour camp before being reunited with his grandmother, who sold scrap metal to junkyards.

There were jobs in fairgrounds, cornfields, racecourses, at Disney World, and fatherhood aged 15. Holley now has 15 children, all grown, to five different mothers; he laughs when I say that Colombians would call him tirofijo, or sure shot; in Cuba he’d be a regadero, a watering can. “Write those down, Matt Arnett,” he instructs Arnett, who documents the stream of ideas that feed Holley’s performative improvisations and sculptures.

In 1979 he carved gravestones for two nieces who’d died in a house fire, and art became integral to his life (“I saw how much it meant to my sister, how something simple could change people’s lives”). Eventually his sandstone carvings and sculptures extended over his property and into the woods next to Birmingham airport, only to be destroyed in 1997 after a protracted legal battle over airport expansion.

I had to step out of the quicksand fields and carve a place for myself, create what didn’t exist.

In 2010 he moved to Atlanta, where he has three workshops on the same block and continues to make the music he was making way before the aforementioned debut album saw him compared to the likes of jazz poet Gil Scott-Heron and avant-jazz visionary Sun Ra.

“I just make the joyful noise I grew up with,” Holley shrugs. “Fairground sounds, church bells, passing car radios. Tapping on bottles, wood and radiators like right here.” His fingernail judders along the heater behind us. “My music and my art are like Siamese twins. I can’t separate one without harming the other.”

Where Sun Ra’s cosmic philosophy married outer space with themes of black liberation – by positing himself as an alien, Ra cut ties with a humanity marred by a history of slavery, oppression and war – Holley insists he is very much of this earth. “I had to step out of the quicksand fields and carve a place for myself, create what didn’t exist,” says the man who often cites Martin Luther King, and only learnt to read as an adult.

He would rather not be called an outsider artist, let alone a visionary, as tempting as it is to think a marginalised life affords a sort of second sight. But what Holley does, what he’s always done, is look, zooming into minutiae and back out to the big picture whether he’s singing, sculpting or simply getting about (he collects found material and makes videos on his phone every day).

Holley’s late-life recognition, then, is about correcting history, granting access, being placed on equal terms with other major artists. Just as his music is testament to hope, faith and fragility, to the joy to be found in weirdness and the largesse that comes with boundless curiosity.

Little wonder, then, that as Holley finishes his set at St John’s by dancing along to a tune about, well, dancing, the crowd erupted into cheers and a standing ovation.

“Thumbs up to the Universe,” he says, beaming.