Tom Petty didn’t bother telling people he was making music with The Traveling Wilburys. Who would believe that Petty was in a supergroup with George Harrison, Bob Dylan, Jeff Lynne, and Roy Orbison? It was too good to be true; almost impossible.

George formed The Traveling Wilburys by accident. After recording his 1987 album, Cloud Nine, Europe wanted an extra song for a 12-inch single.

That night, he told Lynne and Orbison he needed a song quickly. Lynne agreed to help, and Orbison told the guys to call him when they found a recording studio.

Then, George remembered that Dylan had a studio in his garage and called him to see if they could use it. Dylan agreed. George then went to Petty’s house to pick up his guitar. Petty wasn’t going to miss the action, so he asked to join them in the studio.

When they all arrived at Dylan’s garage, George and Lynne started writing the song. George began to think it was silly having all the guys there but not on the record. It was a once-in-a-lifetime moment having all five of them in one studio. So they all sang on the song.

Looking around Dylan’s garage, George saw a box that said, “Handle With Care.” So, they formed the lyrics around that phrase. When they finished recording, George knew the song was too good for a European 12-inch. He kept hold of it until he decided to get everyone to record a whole album.

Somehow, all five musicians were available to record an album to go with “Handle With Care” in May 1988. They gave themselves nine days to record The Traveling Wilburys Vol. 1. It was magical for everyone.

Petty couldn’t believe he was making an album with four of his idols. If he couldn’t believe it, how was anyone else going to? That’s why Petty didn’t tell anyone what he was doing with The Traveling Wilburys. Who would believe him? 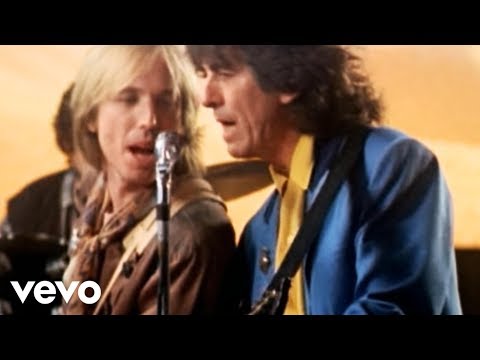 The Heartbreakers frontman had a couple of regrets about the supergroup

On touring, Petty told Mass Live, “We talked about it many nights and then never really did it. We might have some beers and plan it all night and then in the morning we’d be like, ‘Well, no.’ (laughs) Especially when we became successful, there were all kinds of people trying to get us to do tours.”

In the video about the making of the band’s debut album, Petty said, “I think once or twice we even had serious talks about it, but nobody would really commit to it. We never thought we were gonna run out of time.”

When Petty and Lynne played “Handle With Care” during Concert for George, Petty said George would have loved it. On making a third album with the supergroup, Petty said George “talked for the rest of his life about doing it again or maybe taking it on the road.

“It is one of my great regrets that I wasn’t a little more aggressive about getting that done. I always thought we’d have all the time in the world to do it.”

The Traveling Wilburys might not have toured or made a third album, but it’s a blessing we got two albums at all. The supergroup was an accident that wouldn’t have happened if they had planned it.