Wake Up With Joni Mitchell's 'Chelsea Morning,' Live from Carnegie Hall in 1969

A day after being named the 2022 MusiCares Person of the Year, Joni Mitchell has dropped a live performance of “Chelsea Morning,” taken from her 1969 Carnegie Hall performance.

Mitchell kicked off the set with the Song to a Seagull track, just before fans gifted her with a giant Valentine. “She had the crowd immediately on her side when she began the song, but for some reason stopped and had to start it again,” Graham Nash, her partner at the time, recalls. “Right after that, some people from the crowd gave Joni a large, handmade Valentine sign. What followed was a concert of music that stirred my heart and made me realize what an enormous talent Joni is… Simply a show, given by someone who lived life and love to the fullest, pouring out her heart and soul, alone, before your eyes.”

Recorded on February 1st, 1969, the set will be included in the second installment of Mitchell’s archives The Reprise Years (1968 To 1971), out November 12th. Just as she did with her 1967 Canterbury House set in Archives Vol. 1, Mitchell will also release the Carnegie Hall show separately.

An exclusive version of Live at Carnegie Hall is pressed on white vinyl limited to 3,000 copies, with the final LP etched with the eagle that Mitchell wore on her skirt that evening. It also includes a reproduction of a letter Mitchell sent to photographer Joel Bernstein, inviting him to the show. 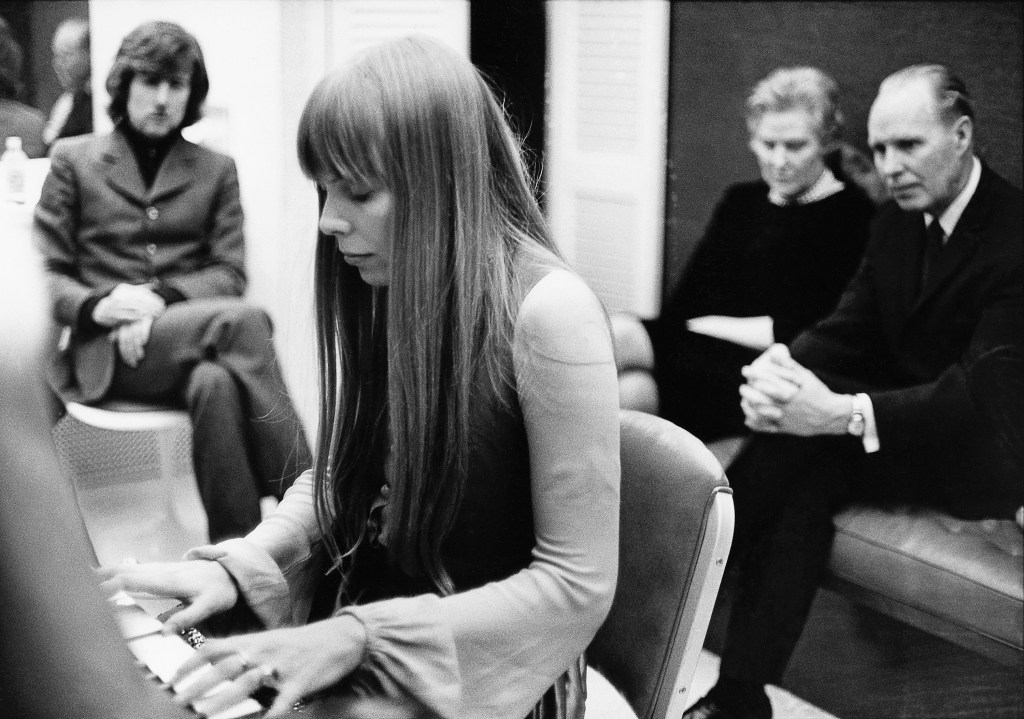 Mitchell rehearsing backstage with Nash and her parents.

Mitchell also flew in her parents Bill and Myrtle from Canada to see the performance, walking them over from the Plaza hotel. “Graham was wearing a floor-length maxi coat, black velvet, but with a pink-and-white chiffon tie-dye scarf, and I was wearing a green-and-white plaid coat,” Mitchell tells Cameron Crowe in the liner notes. “I’ve still got it. It looked like something from a Dickens play. My mother was embarrassed to be seen with us!”

“Joni had bought a long vintage skirt that was made for a parade,” Nash said. “On the front, in colorful sequins, was a large American eagle, and on the back was… a large artichoke. At some point earlier in the evening Myrtle said, ‘Oh, Joan. Is that what you’re going to wear at Carnegie Hall? They look like rags.’” Added Mitchell: “My father came forward and said, ‘Oh, Myrt, she looks like a queen in those rags.’ I loved him for that. Thank God for Papa. He gave me back myself.”