What We Know About Harry Styles’ Future Music Plans

Since launching a solo career after being in One Direction, Harry Styles has proven that he is able to also shine on his own. The “Lights Up” hitmaker released his first solo single, “Sign of the Times,” in 2017 and scored his first No. 1 single in the U.K. and top 5 on the U.S. Hot 100. As of this writing, both of his studio albums — “Harry Styles” and “Fine Line” — have topped the U.S. Billboard 200 and earned Styles many accolades.

Unless you’ve spent the last year quarantining with no technology or radio, then it’s very likely you are aware of the many hits Styles has produced in recent times — “Adore You,” “Watermelon Sugar,” “Falling,” and “Golden.” At the 2021 Grammy Awards, his U.S. chart-topping single “Watermelon Sugar” saw him take home his first Grammy Award for Best Pop Solo Performance.

Harry Styles’ last album, “Fine Line,” dropped in 2019 and he has yet to tour the record due to the coronavirus pandemic. With that being said, Styles has been working on new material that could be a part of his third LP. Keep reading to find out what we know.

Harry Styles is said to be focusing on his live shows 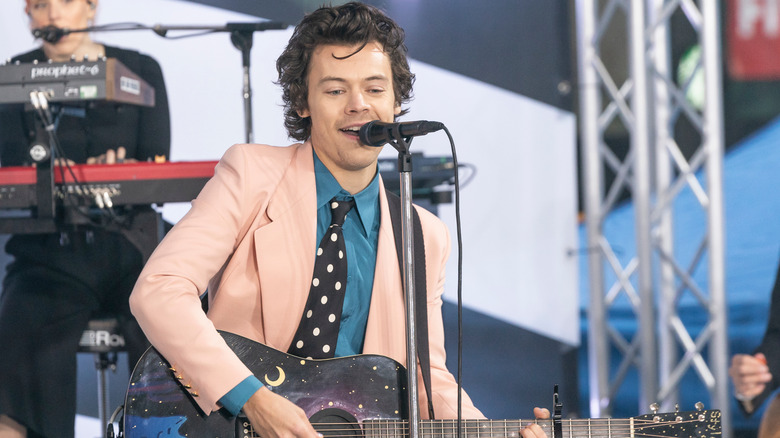 According to The Sun, Harry Styles has been working on new music that could potentially feature on his upcoming untitled third studio album. “Harry has spent time working on music which will likely be for his third album. But it’s not finished and it is still quite a way off,” an inside source told the publication, adding, “He was expecting to be on tour for most of last year and that would have given him time to write the album this year, but things haven’t worked out that way.”

He’s taken this time to dive more into acting, too. “Harry ended up doing his two films, ‘Don’t Worry Darling’ and ‘The Policeman’, almost back-to-back earlier this year and now he is in rehearsals for the US leg of his tour, which will take him to the end of 2021,” the source continued. Since Styles’ tour was canceled due to COVID, the “Kiwi” hitmaker has decided to prioritize the tour he hasn’t been able to embark on and will potentially start to release new music in 2022.

“Right now he wants to focus on making those shows the best they can be and then he can figure out the rest from there,” the insider added. “His label is obviously keen to put out another record but that won’t be until next year at the earliest, judging by how things look at the moment.” Whether he’s touring or recording, Styles’ fans will likely be happy either way.