Which One Of Aretha Franklin’s Hits Was Just Named The Best Song Of All Time?

They don’t call her the Queen of Soul for nothing. Aretha Franklin first kickstarted her music career in the 1950s and went on to have a lot of success and impact on the entertainment industry. The talented powerhouse vocalist may have died in August 2018, but her legacy still lives on.

In 1987, Franklin became the first female performer to be inducted into the Rock and Roll Hall of Fame. As of this writing, she has achieved 73 entries on the U.S. Hot 100, 17 which have entered the Top 10, and two of which topped the charts. Out of her 44 nominations, Franklin went on to win an impressive 18 Grammy Awards. In 2010, Rolling Stone named the “I Say a Little Prayer” hitmaker as the ninth “Greatest Artist of All Time” while the same publication ranked her as the “Greatest Singer of All Time” that same year.

For the first time in 17 years, Rolling Stone has updated their “The 500 Greatest Songs of All Time” list. With more than 250 artists making an appearance, one of Franklin’s hits managed to make the top spot. Keep reading to find out which one was given the biggest honor. 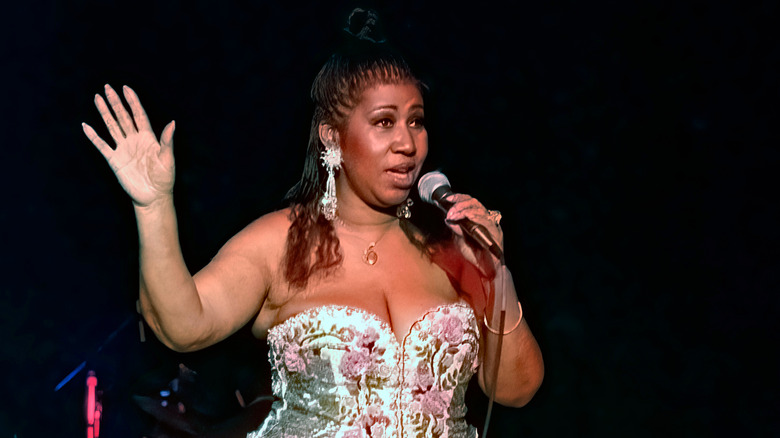 Aretha Franklin has a back catalog of iconic hits that have lived through generations. To name a few, we’re talking “I Say a Little Prayer,” “(You Make Me Feel Like) A Natural Woman”, “Chain of Fools”, and “Think.” However, the single that made the No. 1 spot of Rolling Stone’s “500 Songs of All Time” was her legendary cover of Otis Redding’s “Respect.” The music publication noted that the song “catalyzed rock & roll, gospel, and blues to create the model for soul music that artists still look to today” and helped influence the likes of Mariah Carey (and countless others).

According to the outlet, Franklin stated in her 1999 memoir the anthem was inspired by “the need of the average man and woman in the street, the businessman, the mother, the fireman, the teacher — everyone wanted respect.” Joining the “I Knew You Were Waiting (For Me)” hitmaker in the top five is Nirvana’s “Smells Like Teen Spirit,” Bob Dylan’s “Like a Rolling Stone,” Sam Cooke’s “Change Is Gonna Come,” and Public Enemy’s “Fight the Power.”

Other songs that made the list include Missy Elliott’s “Get Ur Freak On,” Sade’s “No Ordinary Love,” Billie Eilish’s “Bad Guy,” Janet Jackson’s “Rhythm Nation,” and Prince’s “Little Red Corvette.”