Luc Besson’s lifelong obsession with female empowerment has always been hard to square with his lifelong hobby of female objectification. The stylish French auteur and film mogul responsible for the likes of “Lucy,” “The Professional,” and at least nine alleged instances of sexual impropriety loves to build movies around blank women — usually fashion models — who can be reformatted with the power of his own design and costumed with the scant agency he’s afforded them.

In “Anna,” a competent spy thriller that would feel anonymous if not for its slinky bodies and recognizable psychosexual undercurrents, Besson’s signature tendency is expressed with the same literalness that it was in “The Fifth Element” and “La Femme Nikita.” Why start being subtle about it now? Caught in a tug-of-war between the CIA and the KGB, the heroine this time around — a lithe Russian model named Anna who’s played by a lithe Russian model named Sasha Luss — is straight-up described as a skull key, “which means she has the potential to open many doors.”

Of course, Anna can only unlock them because Besson has taken it upon himself to unlock her — to turn her into an unstoppable killing machine who slaughters every single man who looks at her yet always does the camera’s bidding. That dynamic may not be any more pronounced than usual, but it’s far more exposed. Besson has always displayed a unique knack for layering heady concepts in a candied gauze of pop spectacle, but here — in a movie that feels like nothing more than a desperate bid to save the director’s flailing studio — his base desires are barely dressed up.

Effectively stretching a $30 million budget further than Hollywood would ever dare, “Anna” tells a twisty and rather epic tale about a cold-blooded orphan who becomes the pivotal chess piece of a spy game that spans the last five years of the Cold War. A prologue, set in Moscow circa 1985, succinctly establishes the stakes: Nine American spies are caught, and their decapitated heads are shipped Gwyneth Paltrow-style to Lenny Miller (a slumming Cillian Murphy), their CIA contact on the other side of the pond.

Cut to 1990, when a modeling scout discovers a blue-eyed diamond in the rough: Her name is Anna, she’s blessed with the statuesque figure and flat affect that Besson has been chasing ever since he discovered Milla Jovovich, and in just a few months she goes from selling Russian dolls in a Moscow street market to walking the runways of Paris. Cue woozy music, manic energy, and lots of implied sex. And then, just as our steely heroine is about to bed the shady arms dealer who’s been wooing her for months, she whips out a silenced pistol and shoots him in the head (this is sort of her move — roughly 40% of this movie is comprised of Luss walking around with an arched back and assassinating men at close range).

You see, it turns out that Anna isn’t just hot; she’s also deadly. What a twist! Besson helped give birth to this ready-for-the-runway breed of femme fatale, and now, three decades after “Nikita,” he seems determined to be the one who kills it (maybe 30 is just too old for him). At this point, Anna is a bit of a bore. Luss is a compelling enough screen presence, especially when negotiating the muddy waters between real vulnerability and feigned helplessness, but her character is only interested in her own freedom, and she wears all of her other wants like cheap masks. Anna likens herself to the tchotchkes she sells, “a woman inside of a woman inside of a woman,” and Besson has no interest in showing us that deepest layer — he keeps that to himself like a secret.

And so Anna (as well as the film that bears her name) is only intriguing for how she tries to wriggle out of her circumstances and beat the world’s best spies at their own game. On one side there’s handsome KGB handler Alex Tchenkov (Luke Evans, doing his best Soviet brogue), who brings Anna into the agency and takes a sincere interest in helping her survive a program that doesn’t care if she lives or dies. He wants to have sex with her. On the other side is Miller, who catches Anna in the act and turns her against her home country. He also wants to have sex with her. 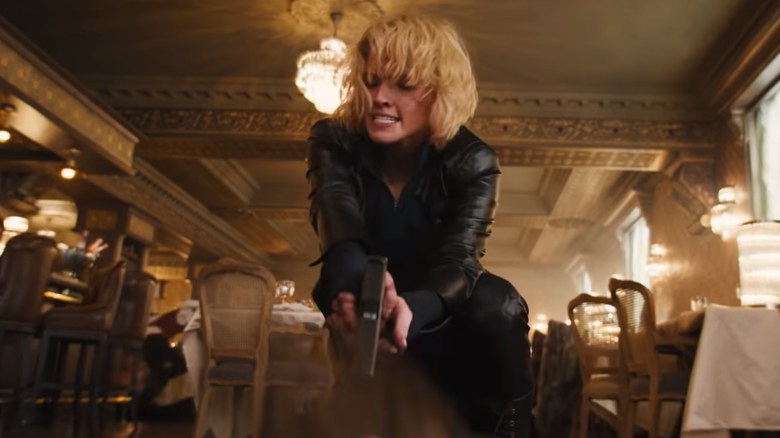 Above Technkov is a merciless older woman named Olga, who Helen Mirren plays as a Russian Fran Lebowitz who seems to have caught the same cold that followed Tom Hanks throughout “Bridge of Spies.” Her sexual aspirations are unknown, but her glasses are fantastic. And above — or at least on top of — Anna is her elfin model girlfriend, Maud (newbie Lera Abova), whom Besson seems to be grooming for a monosyllabic action vehicle of her own.

It’s supposed to be empowering that Anna has complete command over the lust and affection that she inspires so recklessly from everyone else, but — for all of her level-headed poise — there’s something ominous about a film that’s more eager to conflate sex and control than it is to complicate the relationship between the two. At least “Red Sparrow,” a more dangerous and full-bodied take on this same premise, dared to get its hands dirty. Besson doesn’t want to look in the mirror. His script never digs any deeper than insincere pearls of wisdom like “Never put your faith in men; put faith in yourself.” (Interesting notion, Luc.) Instead, it just ties itself into knots, revisiting previous scenes from new perspectives until long after the fun of that trick has worn off.

No, “Anna” has nothing more on its mind than the voyeuristic pleasures of watching a model waste a couple hundred cronies with a pistol, or — in the amusing fight scene where Anna kills an entire restaurant just to get to one guy — shards of broken cutlery. Besson has always had a sharp eye for action, and even though his imagination has been exhausted and he seems to be operating on auto-pilot, the balletic frenzy of his shoot-outs is still a cut above what American films typically offer (“John Wick” notwithstanding).

Sloppy CG blood abounds, however, and the chic outfits and expressive European locations do most of the heavy lifting. Unlike the unmoored violence of “Lucy,” which literally evolved from scene to scene as the film went along, the gunplay in “Anna” grows repetitive before long, and the heroine’s invincibility feels like a cheap substitute for the power that Besson wields over her. It’s telling that all of the film’s many endings are built around people sitting and talking, as Besson clumsily works to tidy up the mess he’s left behind.

If Besson’s films seldom have much going on under the surface, at least their surfaces can be seductive. Or, in the case of something like “Valerian and the City of a Thousand Planets,” at least they can be wild. “Anna,” on the other hand, only covers itself in lingerie. By the time it’s finally over, the only person more exposed than its star is her director.

“Anna” is now playing in theaters.