NBC this Thursday night added to its repertoire Annie Live! Did you love it like tomorrow (which, I hear, is always a day away)?

Rounding out the main ensemble were singer Nicole Scherzinger as Grace, plus Unbreakable Kimmy Schmidt‘s Tituss Burgess and Smash‘s Megan Hilty (stepping in for a COVID-positive Jane Krakowski) as Rooster and Lily/”Ralph and Shirley Mudge.”

Sandy was played by… a dog named Sandy.

The live production — NBC’s sixth such musical in the past eight years, as detailed below — went off with nary a major hitch, held in front of a fully vaccinated and masked audience of nearly 500 people. 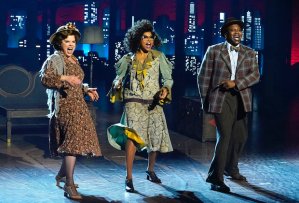