Matt Hancock joined Dan Walker and Louise Minchin via video link from Reading today to discuss the ongoing row surrounding free school meals during the holidays. With Boris Johnson under pressure to perform a U-turn on the issue, it was a major talking point Dan was keen to put to Mr Hancock, especially with Manchester United footballer Marcus Rashford’s ongoing campaign gaining support. But despite Dan putting the questions to the MP, not everyone was impressed with the BBC Breakfast interview.

Mr Hancock then revealed how he has been working with The Great British Bake Off judge Prue Leith and hospital food specialists to make sure the food provided “helps patients get better” all over the country.

The opening question ran relatively smoothly but it didn’t take long for Mr Hancock and Dan to butt heads. 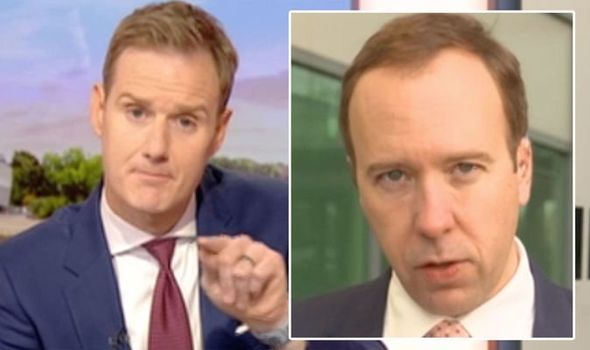 Dan asked the Health Secretary: “Is more money going to be made available to local councils on this issue particularly?”

Mr Hancock replied and told Dan he felt “very strongly that everyone gets the support they need to have good food”.

He then commended Marcus Rashford’s campaign as “inspiring” and “right” and was based on values we should “all get behind”.

However, without directly answering Dan’s question, the BBC Breakfast host interrupted the MP.

Taking to Twitter after watching the chat, one BBC Breakfast viewer said: “Matt Hancock on BBC Breakfast this morning is the most embarrassing thing I’ve ever watched.”

While a third commented: “I see someone handed Matt Hancock a shovel before his interview with BBC Breakfast this morning. He never seems to know when to stop digging himself into a hole does he?”

Others took issue with Dan’s interview style, with another fan suggesting: “Hancock must love coming on #BBCBreakfast . Such an easy ride.”

“@BBCBreakfast oh dear Dan,” weighed in another. “Are you actually listening the Mr Hancock answers?”

Another of Dan’s critics said: “@BBCBreakfast I don’t like Matt Hancock but your presenter won’t let him finish a point and keeps interrupting…”

“@BBCBreakfast Can someone else interview guests on BBC Breakfast? Tired of Dan Walker’s nippy interview techniques first thing in the morning,” asked a further.