Susanna Reid was “belittled” on Good Morning Britain today when former Speaker of the House of Commons accused her of being bias in favour Boris Johnson. ITV viewers were infuriated by John Bercow’s swipe and took to Twitter to call for Piers Morgan to return and replace temporary host Alastair Campbell.

Reid said: “I think there is an issue where people have a problem with how politicians speak anyway.

“We’ve already addressed the issue of Tony Blair and our reasons for going into the Iraq war, you have Nick Clegg of course who promised the Liberal Democrats would not raise tuition fees, tuition fees were raised after he entered into Government.

“We unfortunately have an issue, in the Brexit referendum we were told by project fear there would be a complete collapse of the economy.”

“We were told there would be £350 million for the National Health Service,” Campbell interjected. 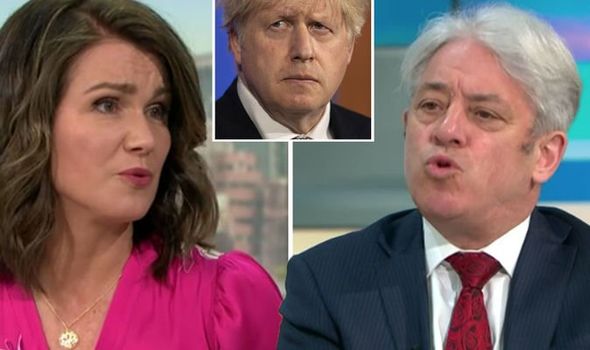 Bercow said: “Susanna there is a difference between, for example, somebody making a pledge and breaking it for which Nick Clegg and the Liberal Democrats rightly paid very dearly and someone spewing falsehoods on a sustained and uninterrupted basis.

“Surely you can see there is a conceptual difference between those two phenomena?”

Interrupting, Bercow accused: “No, you just like to call him Boris because he’s your favourite puppy dog.”

“That’s insulating towards me,” Reid hit back. “I think a lot of people call him Boris in the same way you call Keir and I would call you John, people find him relatable.”

Another said: “Love you Susannah, but had to switch off again…Bercow and Campbell were an uncomfortable, creepy, embarrassing car crash. Sort it out GMB…not been the same since the departure of Piers.”

“Puppy dog ….WOW. that was a car crash. No way would @piersmorgan would have allowed  @susannareid100 to me belittled like that #GMB,” a third added.

Someone else shared: “If ever Susanna Read needed @piersmorgan it’s this morning dealing with these two #gmb.”

Continuing the debate, Campbell argued: “Susanna, the economy did not grow by 73 percent in total [during Johnson’s tenure] that’s a fact and it goes back to 1990 which includes the entire period of the Blair/Brown gov and he said that’s under a Conservative Government.”

“So you’re saying your problem is his date was wrong?” Reid questioned.

“No my problem is that it’s not true and if he’s not true you should correct the record that’s what the ministerial code says you should do.”

“But the economy has grown it’s just from a different date,” Reid argued.

“Well I’ve got two people with a particular bias so it’s my job to speak for the person who’s not here,” Reid explained.

Good Morning Britain airs on weekdays on ITV at 6am.