This year’s series of Britain’s Got Talent has seen one sort of act notably on the rise – danger. Auditions so far have included scientist turned magician – Kevin Quantum – and ex-SAS marine, Jake Stott, meaning the series hasn’t been short of some of the most death-defying acts on the show’ history. Tonight will see yet another contestant put his life at risk as escape artist Christian Wedoy takes to the stage but judge Simon Cowell is seen calling for help as his act looks as though it could go dramatically wrong.

The latest series of the talent competition began back in April with all four of last year’s judges returning to the panel.

Simon, Amanda Holden, David Walliams and Alesha Dixon have been whittling down the competition and tonight’s show will present a new selection of budding stars.

One theme which has been very prevalent this year is acts turning up to conduct very dangerous auditions with mixed success.

The judges will be left worried for the safety of one contestant tonight after he tries to pull-off a terrifying stunt. 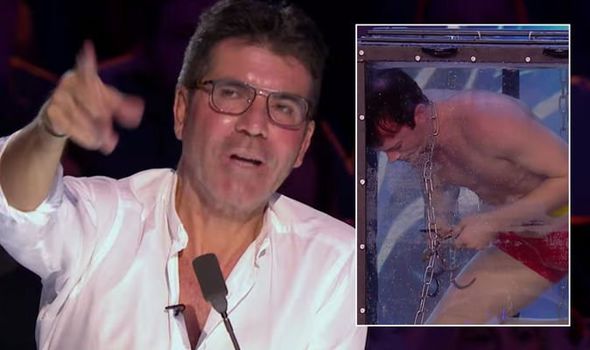 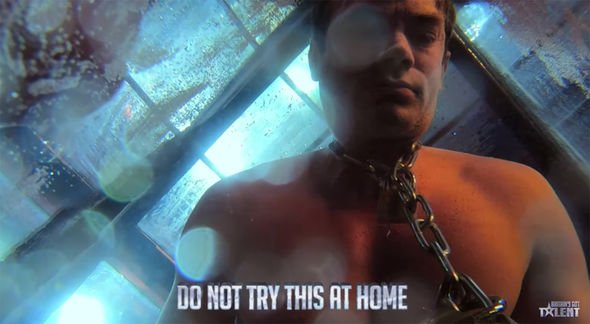 Tonight’s instalment will feature yet another daring act in the form of escape artist Christian Wedoy whose fate is put in the hands of the judges.

He will be locked up in a water tank and handcuffed in order to make sure he cannot leave – but it’s not known whether he manages to escape.

A first-look clip ahead of this evening’s episode shows Christian struggling to get out of the tank whilst being deprived of oxygen.

Ant McPartlin and Declan Donnelly are seen cautiously waiting in the wings with an on-site medic close by in case anything goes wrong. 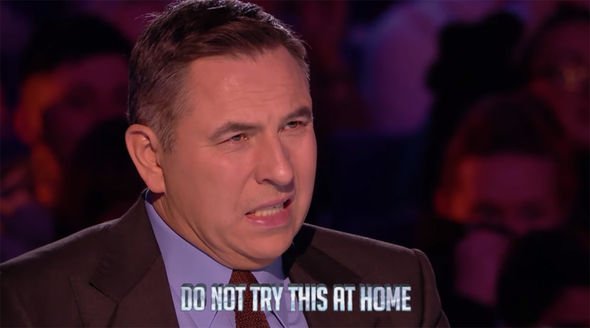 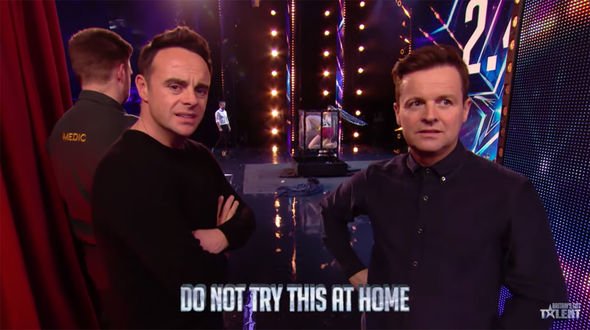 The clock racks up to over three minutes and Christian is seeing becoming gradually more agitated as he starts to run out of oxygen.

“Three and a half minutes – if you go over four minutes, we’re in a very bad place,” states the act’s assistant – Hans.

As the camera pans to the audience, who look nervous, they aren’t the only ones who start to question what’s going on.

Ant tells the camera: “He’s shaking in there, this is hard to watch,” with his co-star Dec looking equally as uneasy.

The contestant’s legs are seen shaking as the clock goes over four minutes, which is enough for Simon to decide to intervene.

The panicked judge is seen calling the medic onto the stage after worrying about the contestant’s safety, beckoning them to help.

Whilst the outcome of Christian’s audition is not yet known, the tense scenes make for some difficult watching – will he make it through to the next stage?

The series is airing its second-to-last set of auditions tonight with the live shows of the programme put into question.

The Mirror reported the chances of the live finals taking place this year are “very slim” with there being several concerns around the logistical issues as well as the safety of the contestants.

An insider told the publication: “The initial plan was that the final could be filmed this autumn, but that’s looking increasingly unlikely. We can’t imagine an audience of that size being allowed.

“Can we do it without an audience? Yes. But would we want to? No. And then there are the acts. We’re going to put all those people in that choir together? You’re going to fly over that dance troupe from India?

“No, we don’t think that it’s going to happen. I’d say its chances were very slim.”