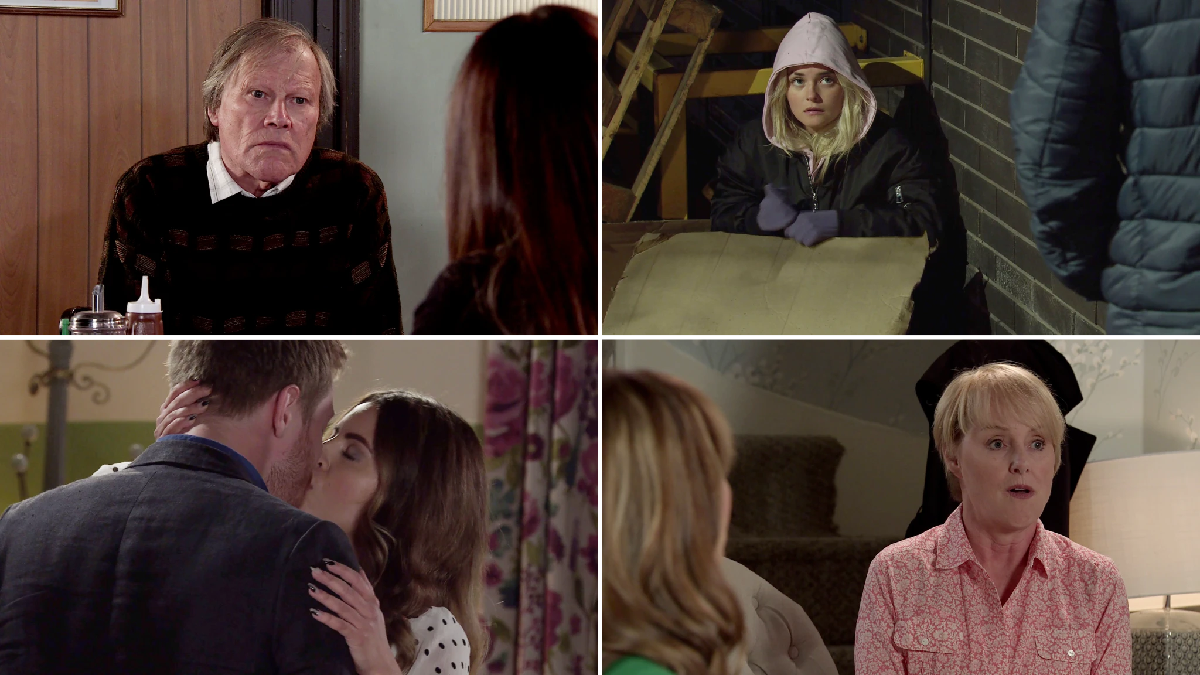 There is a huge decision ahead for Roy Cropper (David Neilson) in Coronation Street as his guilt over Sam Blakeman (Jude Riordan) reaches crisis point.

As a result, he makes a decision to leave the Street but can Nina Lucas (Mollie Gallagher) and Carla Connor (Alison King) talk him round?

Max sets off to school only to run into Asha, Summer and Aadi, all of whom give him a hard time about his video. David’s anger towards Max is further fuelled when he finds out from Daniel that he didn’t show up at school again.

David orders Max to apologise to everyone he has upset with his video. When Max refuses, David grabs his laptop and accidentally drops it.

Faye returns home from prison to find Craig has festooned the house in yellow ribbons. Pointing out that she’s only out on bail, Faye flees upstairs, upset.

Stu and Kelly make their way to the soup kitchen, but when Kelly spots Billy serving the soup, she quickly does a u-turn. Billy catches a glimpse of her. Kelly confesses to Stu about her part in Seb’s attack but insists she never hurt him.

George calls at the flat with his old telescope for Sam. Sam looks pleased until he spots the smashed memory jar on the side.

DS Abney calls at No.13 and reveals that the gun used to kill Natasha was the same gun used by Tez in a raid several years ago. Abi meets up with Tez in Victoria Garden and begs him to keep the police off her back. Roy clocks their exchange with concern.

Nick calls in the cafe and tells Roy how the police are in the process of tracing the gun that was used to kill Natasha. Kevin meets up with Tez in the ginnel and implores him not to ruin Abi’s life.

Roy advises Abi to tell the police the truth about the gun. DS Abney calls at the cafe and tells Roy that she has some more questions she’d like to ask him about the night of the sinkhole collapse.

As George sets up the telescope on the balcony for Sam, Nick frets over the memory note he read in which Sam wrote how he wished his last words to his Mum had been different.

Billy mentions to Imran how he saw Kelly at the soup kitchen and thought he should know.

In Victoria Garden, Max confides in Daniel about how he wishes he could put things right. Is it too late for him to make amends?

Faye descends the stairs and apologises to Craig for overreacting. Tim and Gary assure Craig that Faye really cares about him and just needs time to adjust.

Roy tells Abi that yet again he’s had to lie to the police on her behalf. Abi tells Kevin that it’s only a matter of time before the police link her to the gun. Roy tells Nina that the gun used to kill Natasha was the same one Abi was going to use to kill Corey and that as a result, they must both accept responsibility for Natasha’s death.

DS Abney calls at No.13 and tells Abi and Kevin that they’ve arrested Tez, but so far he can’t remember who he sold the gun to. Roy calls at the solicitors and tells Imran that he wants to sign over his flat and his business to Nina as he no longer needs them.

When Sally suggests they discuss ideas for the Christmas market, Roy asserts that he won’t be getting involved. Roy calls at the garage and asks Abi to sell the Woody for him as soon as possible. When Abi reveals that Roy’s selling the Woody, Nina’s more worried than ever.

When Nina finds out from Adam that Roy has signed over his entire estate to her with immediate effect, she’s shocked. Nina tells Abi that she’s frightened Roy is going to take his own life. Roy reveals that he plans to leave Weatherfield for good, tonight.

Worried for Kelly’s safety, Imran tells Toyah he’s going to track Laura down. Imran dupes Laura into meeting him in the bistro.

Faye starts back at the bistro, but she’s a bag of nerves and drops a tray of food. Faye admits defeat and tells Debbie that she can’t work at the bistro as it brings back such terrible memories.

Nick, Leanne and Sam return from their first session with the psychologist.

Sally calls Maria and Mary together for a meeting about the Christmas Market. When Maria reveals that a local councillor has resigned, Mary points out that she and Sally will be locking horns sooner than expected.

When Sally suggests they should join forces and offers Maria the role of mascot in her election campaign, Maria’s suitably unimpressed.

Roy explains that he’s taking a job as a chef in South America. Nina summons Carla, Cathy, Brian, Fiz, Chesney and Mary to the cafe and one by one, Roy’s friends describe how much he means to them.

Carla plays Roy a voice message Nina left, implying Roy got dragged into something against his better judgement. Roy refuses to be drawn and Carla heads out, hurt.

Roy tells Nina that the fact he’s now lying to Carla proves that leaving is the right thing to do. Can Nina stop Roy from leaving the street he loves?

In the bistro, Laura maintains she hasn’t clapped eyes on Kelly in ages. As Kelly beds down in a doorway, a drug dealer approaches and offers her some free spice. Kelly refuses and he heads off, leaving her terrified and alone.

George calls at Nick and Leanne’s flat and reveals that Sam sent him a note requesting his company for some stargazing. As George prattles on about astronomy, Sam giggles, his interest evident. Nick wishes he were the one making his son laugh.

When Tim suggests that Faye could take over Alina’s sales job at the factory, Sarah’s agreeable and offers her a month’s trial. In Speed Daal, Sally, Tim, Gary and Craig raise a toast to Faye and her freedom.

The dealer returns but Jacob sends the dealer packing. Stu appears and recognising Jacob, orders him to sling his hook. Stu calls in the cafe and begs Nina to give Kelly a break, but Nina remains unforgiving.

As Stu heads off, Kelly phones the dealer and orders some spice. Stu finds Kelly semi-conscious on a bench and realises with horror she’s been smoking spice. As Stu sets off to find the dealer, Kelly staggers off in the opposite direction. As Kelly stumbles along, she passes some drunk school kids, who decide to follow her.

Daisy receives some children’s clothes in the post and explains to Jenny that the company saw her pictures of Bertie and assumed she’s an influencer. Daisy presents Daniel with the designer clothes for Bertie. Daisy confesses to Daniel that the clothes were freebies. Daniel’s disappointed.

Aggie tears a strip off Grace for treating them like unpaid babysitters.

Zeedan listens to a voicemail from Hashim, and in a bid to get them out of the way so that he can launder some cash through the till, Zeedan tells Yasmeen, Alya and Ryan he’s booked them into a spa for the afternoon as a treat.

Abi suggests to Nick and Leanne that Sam might like to come round for tea with Jack.

Daisy apologises to Daniel, but as he scrolls through the pics on her phone, he notices she’s cropped him out of every shot. As Daniel and Daisy row over her exploitation of Bertie, their anger turns to passion and they head for the bedroom.

When Aggie finds out that Michael’s agreed to have Glory for the night, again, she’s furious. Grace tells Aggie that if she buys her a comfy sofa, she’ll consider staying in more often. When Bernie reveals how Chesney and Gemma could do with some new furniture, a conniving Grace reckons that she might have some for sale.

Having finished their lunch, George and Eileen pay the bill. As Zeedan rings the bill through twice, Ryan appears by his side and points out his error. Zeedan covers his frustration. In Victoria Garden, Hashim puts pressure on Zeedan to push more cash through the books. Ryan clocks their heated discussion with interest.

Will Nina stick up for Kelly or leave her in a situation similar to what she went through?

Meanwhile, Abi explains to Kevin how she just desperately wants Sam to get better. Kevin tells Abi to pack a bag as he’s booked them a honeymoon and they leave in a couple of hours. As their taxi pulls away, Kevin spots Kelly on the doorstep of No.7.