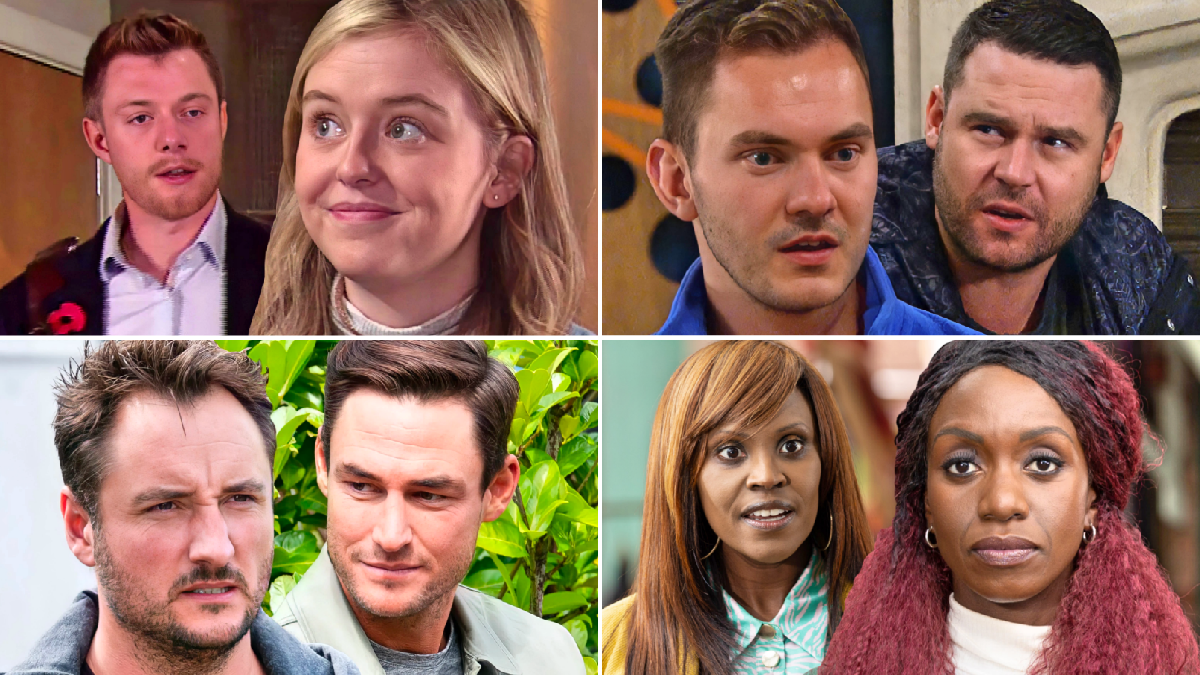 With the clocks having gone back and winter well and truly on it’s way, the nights are getting colder, but over in soapland, things are only just beginning to heat up!

Kelly Neelan receives the news she’s been longing for in Coronation Street, as she’s released from prison with immediate effect, but her struggles are far from over, after a series of unfortunate events prove that she’s got a lot of making up to do.

Emmerdale’s Ben Tucker learns that Jai Sharma is planning on blaming the survival event disaster on him, while Tracy Metcalfe could be in for a shock, as Nate Robinson is approached by a woman on a night out.

The father of baby Alyssa is revealed in shocking EastEnders scenes, while Hollyoaks’ Sid Sumner grows suspicious of Leela Lomax.

It’s set to be a big week for many of soapland’s finest, so if you’d like a look at what’s coming up, then keep reading!

Kelly’s hearing takes place, and the judge reveals that she’s releasing her with immediate effect. Imran and Toyah, however, are informed that the might have to choose between Kelly and Elsie, so Kelly makes the decision for them, telling them she’ll live elsewhere, but upon returning to her new accommodation, she finds the word ‘murderer’ sprayed on the wall.

Desperate to make amends, Kelly approaches Nina, but Nina informs her she’ll never forgive her for what she did. Roy, however, suggests that she cut her some slack, as Kelly appears to be genuinely sorry. But Kelly soon finds herself in trouble when Dev notices a scratch on his car and assumes she is to blame. One thing leads to another, and as the week comes to a close, Kelly beds down in a shop doorway for the night – lonely and frightened.

The day of Natasha’s funeral arrives, and as the hearse pulls up in the street, Sam squeezes Nick’s hand. Afterwards, the family gather in the bistro, and Sam hands Nick a eulogy he’s written, which Nick agrees to read out. But he struggles to contain his emotions.

Summer offers to babysit Bertie, and later tells him how much she enjoyed doing so. Daniel is pleased and they make a start on her interview prep, but as she comes out of Daniel’s flat, she pains on a smile for Aadi, while wistfully glancing back. Adam, meanwhile, calls round and quizzes Daniel about his intentions towards Daisy. Mistakenly assuming they’re discussing her, Summer’s thrilled

Priya struggles with an intense nightmare brought on by her injuries, and she lashes out at Ellis, leaving him shocked by her accusations. Al gets wind of the rift and is ready to take advantage of the situation. Ellis, however, makes a heartfelt apology to Priya, and there’s a sense there might still be hope for them.

Tracy plans an intimate date night, but Nate heads into Hotten with Billy for a lad’s night, where he meets a woman named Fiona, who chats him up. Tracy sends him a sexy picture, but Nate misses the text due to his broken phone. Billy, meanwhile, lies to Tracy the following day about what happened last night.

Jai is planning on blaming Ben for the survival event disaster. Ben discovers the truth, and is horrified when Jai offers him a buy-out in exchange for his resignation. Ben decides he needs a lawyer, and Aaron gets wind of his boyfriend’s ordeal, and makes matters much worse, as he punches Jai, who ultimately suspends Ben.

Zack takes baby Alyssa off Martin but as he walks off her toy drops and unbeknown to him, a girl watches on. Later, both he and Martin receive the paternity test results. Alyssa’s toy has been dropped off, when they scan the area, Zack sees a girl. Once him and Sharon catch up to her she tells them her name is Jada. She’s Alyssa’s mum and when she reveals who the father is Sharon and Zack are shocked.

Callum tells Ben and Jay about the Prince Albert’s gay icon’s event night, but notices Jay mouth something to Ben. When questioned,  Ben eventually tells Callum about  his past numerous partners,  leaving Callum feeling insecure. Ben encourages Callum to go to the event at The Albert while he has a meeting with Kheerat. At the event, a flirty guy approaches Callum and ends up giving him his number, which Ben later finds and feels betrayed.

Gray wants to tell his kids about the engagement and the baby, but Chelsea doesn’t think it is a good idea, she has yet to let Denise know the engagement news too. Later, Chelsea and an excited Kim announce the news, but Denise has a few home truths for Chelsea.

Nate’s partner Lexi reminds him of their reason for being in the village, but Nate is distracted, convinced that one of the Deverauxs must know what happened to his old flame, a face that is in fact familiar to them all.

DeMarcus decides to buy something nice for Martine but he’s short on money and leaves Nate an IOU. All the while, he’s being watched by his teacher resulting in a visit from his mother, Viv, that could cut DeMarcus’ time in Hollyoaks short.